Miss Ruthie had a menagerie of animals on her farm, including Rottweilers. When I would visit, Rottweiler Gretel would trot up to me and lie in my lap—well, her head was in my lap. She was a big girl! I loved her and wanted to get a Rottweiler, but Husband was opposed because they have a reputation. Miss Ruthie’s friend’s daughter’s dog had labweiler puppies, (half black lab, half Rottweiler) and I picked out Barkley when she was three weeks old. She was all black and had a labby head with small rottie ears and a rottie body. I had just discovered basketball and I named her after Charles Barkley. I downplayed the Rottweiler part to Husband. 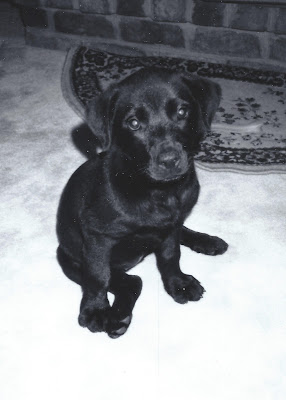 One of thirteen puppies, she had had a good puppyhood under Miss Ruthie’s tutelage. I crate trained her from the start and she would settle into her crate for naps and at night time. Crate training made housetraining so much easier, for one. It also made it easier for Barkley for when guests came over and they weren’t comfortable around dogs. She just went to her crate. Also, it made traveling easier, because I knew she was safe. Once we had to stop by somewhere on our way to our bay house. It was a hot summer day, so we just brought her up with her crate and there she was, comfortable in her domain. It prepares dogs for any kind of containment; kenneling or if they’ve had surgery and need to be still.

The first thing I remember about Barkley is that she smiled. She smiled when she was excited to see you. So then whenever she smiled I would say, “Smile.” Eventually she would smile on command. Actually, that’s the second thing. The first thing is that she was very licky. Lick-lick-lick. “Why does she have to be so licky?!” my husband would complain. And she liked to sit on my feet. It was very comforting having the weight and warmth of her body leaning into me. She was just a people dog.

She could fetch and she liked to play. She was very energetic and such a lab. Except. She hated water; which was good because I never had to be concerned about her trying to escape the backyard. The only time I ever saw her voluntarily jump into a body of water was when a neighbor-friend brought his purebred, 23-bloodlines, dumber than a stump, black lab for a visit. His name was Rolex, because . . . wait for it; yes, he was a watch dog. Anyway, he went running down our pier and jumped off the end. Barkley followed suit. Splash! I couldn’t believe it. Perhaps she was nearing her heat cycle at the time. And then!

Falcon, my stepson’s little yappy dog, who was with us for the weekend, went flying after Barkley as if to say, “I’ll save you!”  Splash! All 22 pounds of him!

Her distaste for water wasn’t just with swimming; it was also with the rain. She hated getting her feet wet, and if it was raining, she’d stand at the door and look out. If I called to her or put her on a leash, she did this funny little I-hate-the-rain dance where she lifted up her paws and try to shake off the water. Sometimes she really just refused to go out if it was very wet. “I’m not going out in that stuff!”

She was also very sneaky when it came to baths. We had a walk-in shower, so I would just put her on a leash and walk her in. That worked the first time! The second time, she knew what was going on. I did get her into the shower, but I had to keep her on the leash, and essentially do everything one handed because she had figured out how to open the shower door with her nose. She was annoyingly smart and disobedient like that. But as I write this, it makes me laugh to think of getting soaking wet and soapy with her.

Somewhere along the line, she got scared of thunderstorms. It wasn’t until much later in her life, so I think she must have gotten frightened at a kennel, or when I was away for the day. She would shiver and shake and her teeth would chatter. says that once animals get scared like that, it’s harder to get them unscared.

So I’d give her a homeopathic remedy, Whole System EEP (by Nutriwest) for calming down as well as Perelandra’s ETS for Animals, which is their version of the Bach flower essence, Rescue Remedy. Barkley responded very well to homeopathic remedies and flower essences. She had a queasy stomach sometimes, especially when she got nervous, so I’d give her nux vomica. She was mostly very cheerful, and just wanted to nuzzle in.

We had hand crank door bells on the doors that you would turn when you wanted to ring the bell. She would go and touch the bell and make it ding when she wanted to go out. If we were at our vacation home, she would touch the door knob. She was so smart like that. I never taught her to do that, she just did it.


She was with me wherever I went. When I was in college I had a word processer, which I thought was very fancy at the time. Barkley would lie on my feet as I was tippy-tapping away on the keyboard. And then when I was printing out my paper, we would play a game with her bone. I would hide it, and she would find it. “Where’s your bone, Barkley?” Of course, being the Pavlovian dog that she was, after a few times, as soon as she heard the click of the printer starting, she was all excited.

I took her to basic doggie obedience class for a six-week course when she was still a puppy. We learned how to sit and stay and heel. She was so smart. I would play with her in the house. “Sit,” I would say. And she would watch me as I inched further away. In the beginning, she would start after me. “Stay.” I would go on the other side of the house and call to her, and she would come, wagging her little nubby tail as if she’d not seen me all day.

~Excerpted from Healing Dogs with Love
Posted by Hali Chambers at 1:27 AM