When I first got the girls, I was very vigilant about watching them when they went outside. Especially when they first got here and made their way down to the barn. But they don't go very far and have their favourite spots, usually where I can see them from the back porch or out the kitchen window. Then I leave the door open and they trot back in. Well. Just as I was thinking it's nice just to be able to let them out like that, I had a bit of a scare. I let Millie out & got involved cleaning and I don't how much later, I heard Millie bark from outside. A "help me" kinda bark. I ran outside, no Millie. I ran around the house, out to the labyrinth, calling her name. Nothing. It was raining and I'm getting a bit frantic. "Millie?  Millie?!  MILLIEEEEEEE!!!"
And then I found her:

I had thrown some veggie scraps behind the woodshed, and of course she went to investigate. And there she sat. Until it started to rain. So I tried to get her up. I coaxed her with treats. Or rather, I didn't. So I went back into the house to get a towel so I could lift her up with it. And when I came back out:

Millie, more than Maggie, gets stuck. So I put the 2 orthopedic beds together so that she wouldn't slip off onto the 6 inches of floor. Aaaaaand . . .


So I've turned them the other way. There's no way she can slip between them now.


Millie pretending not to care:


And then Millie gets Maggie's bowl:


And then! She takes her food bowl & puts it on top of Maggie's.

And we end with Millie snuggling up to Maggie's feet: 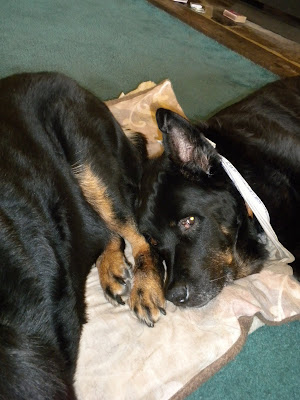 I have about 2 months before I move and so I have been cleaning-purging-packing. One of the things I've been dreading the most is the garage. Ugh. When I first moved here, I was down there a lot because I had my art studio set up, along with carpet, my wicker furniture--it was pretty swanky.  But I've not spent a lot of time there in the last coupla years & the space has become more of a catch-all for stuff. STUFF. Anyway, Mum has been nagging encouraging me to tackle the garage & when she offered to help, I was relieved but also trepidatious. She's so organized, and we know I'm a spreader.

So she came over this past Wednesday. We had tea before, and I showed her an episode of America's Messiest Home before we started to clean--you know, just for contrast:

Then for added measure, I showed her an episode of Hoarders. This was a good episode, and by "good" I mean disgusting. Janet, a retired nurse, was living without plumbing or heat. Her house was FILLED with not just stuff, but trash. She climbed over it to get to her chair (kinda like the one Mum is sitting in) where she said she didn't really need heat because she stayed warm under 7 blankets. When they asked about the plumbing, she said she went outside where it was "private." But as she's saying this, the camera is panning to the urine-filled bottles strewn along the mountain of stuff. Oh, but it gets worse. Because, then you're thinking, What about Number 2? When her son goes to investigate, he steps on a plastic bag and it breaks open. No, not a diaper. Just a bag. Of poo. Eeeewwwww!  And then Janet blames the flimsiness of the bag. Yes, it's the bag's fault. Stoopid bag for breaking.

Then we had lunch. Kidding. We ate before Pee Bottle Nurse. And then we went down to the garage. Suddenly, my clutter wasn't looking so bad. And we cleared it out in an afternoon. Done & done! And Mum even said, "This isn't so bad."  Hahahaha  THANKS, Mum!  I couldn't have done it without you!
Posted by Hali Chambers at 1:41 PM No comments:

American Idol Draft in the Archives

I'm in the process of creating a blog about the River House for prospective renters. As I've been sifting thru all my posts for photos, I found this draft that I never published:
Did anyone else see Simon Cowell do this . . .
when he was talking to Katie?

Right up there with Paul Ekman. Altho, truth be told, I first learned about the Other-Than-Conscious bird flipping from an episode of Lie to Me.
Posted by Hali Chambers at 9:15 AM No comments:

What is Millie looking at? 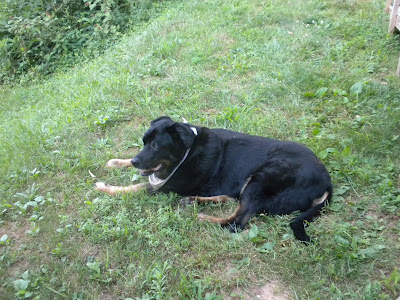 Every once in a while, the dogs do something new:


Where's Maggie?
The other day I was out walking my labyrinth & I saw Fisherman Willie coming up the drive: 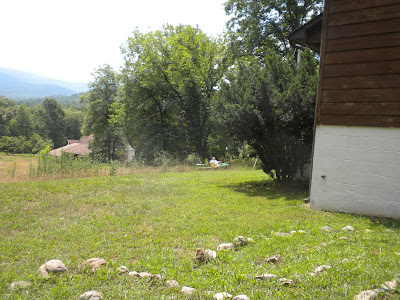 I met him at the back porch to return a water bottle, & of course the girls had to say hello: 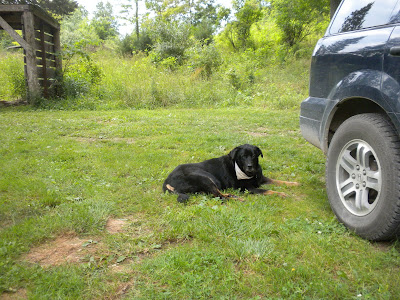 Maggie has been exceptionally woofy lately.

But seriously, I kid. We've been having rain on & off & I finally realized that she's hearing thunder way off in the distance before it gets here. Another thing is that there's road construction going on across the river in Rileyville, a few miles up the road. Except that it's magor-move-a-mountain-with-dynamite road construction. So I think she must be hearing the dynamite going off. So I'm being extra patient and giving her Whole System EEP along with having her wear her thunder shirt. Saturday night I was having a Drop Dead Diva marathon and I'm lying on the sofa and she's 4 feet away barking up a storm. Also 4 feat away from her food dish.

At least I don't have to hand feed her like Gareth at Mystic Pet does!
Posted by Hali Chambers at 1:27 AM No comments:

As you know, I'm a huge fan of Cakewrecks. One of my faves is a Father's Day cakewreck, Happy Falker Satherhood. Go see, I'll wait . . . word-journey-whatnot. Anyway, I gave everyone in the fam a Cakewrecks calendar this year, so everyone's up to speed. So for all the fathers out there, I got crafty & made cards: 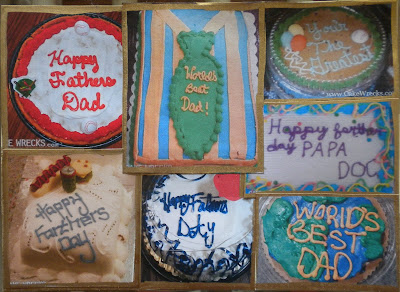 I painstakenly printed out a sheet of pix & cut & collaged individually onto cards. Then I got S-M-R-T, and did the collage on the computer first: 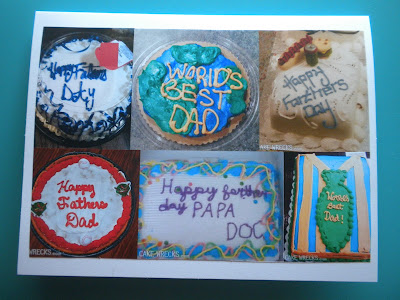 To the worid's best dad: 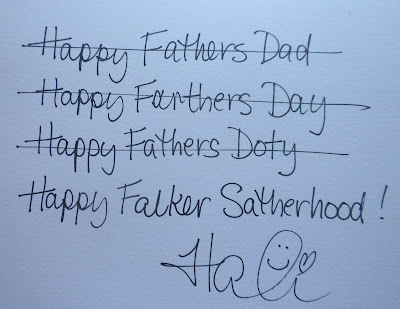 Yesterday I was sitting at the kitchen table, when FWAP! A bird hit the window. I went outside and there the little guy was, gasping on the ground. I picked it up and held it in my hands. It was stunned, but nothing was broken. So I just kept Reiking it, and he started to perk up. So I got the camera to take a few pix: 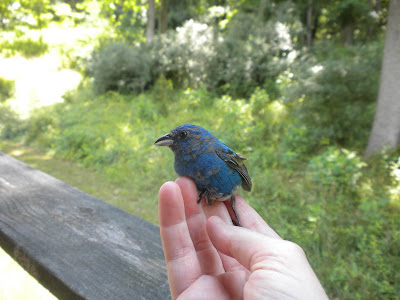 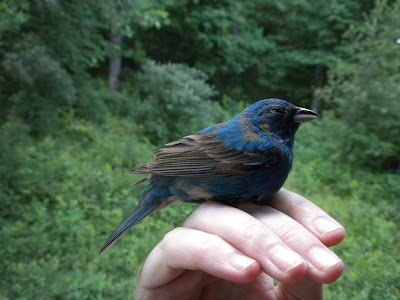 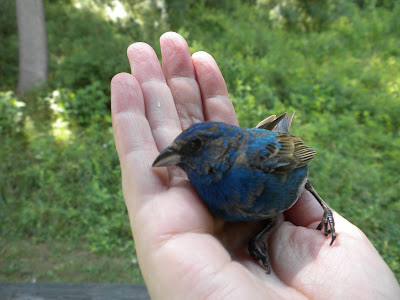 I put him down because I thought he might be ready to fly: 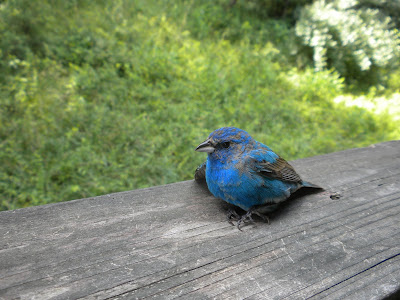 But eventually, he flew off:
I know Mum will prolly correct me and tell me this is not technically a blue bird, it's a such-and-such. Well, looks blue to me!  ;-)

UPDATE: I found out what kind of bird this is! And by "I," I mean extensive research done by Crossword Wiz Mel. It's an indigo bunting. And then!  After all that wondering what kind of exotic bird it could be, in a casual convo with Fisherman Willie, he says, "Hey, have you noticed we have a few indigo buntings around?"

We have a coupla more months of long-ramp days, and then we'll be at the new house with a much shorter ramp. In the meantime . . .


Oh well. You may notice that Maggie is wearing her Thunder Shirt. We've been having bouts of thunder, but not so much rain. Also, last night there were fireworks going off down across the river, so it helped her stay calm thru that.

Lena at Mystic Pet was telling me a familiar story: she gave the girls each a bone. Millie didn't want Maggie to have hers, and Maggie taunted her with it. So Lena separated the girls and then they started barking. In the end, she took away the bones. Hahahaha  Welcome to my world!


Maggie won't eat out of a metal bowl because she doesn't like the noise of her tags hitting the bowl. But it doesn't stop her from going to Millie's bowl! Gareth is still hand-feeding her at Mystic Pet. We are all well-trained!

A coupla shots of Millie this a.m.:

Yoo-hoo, Mil!
Have a GREAT Monday!
Posted by Hali Chambers at 1:27 AM No comments:

Down by My Lake

We had the house inspection last week, so I had an opportunity to explore a bit more.

Down to the lake:


Here's another shot of it from the other end on my road:

Last weekend, Chiro-sister & BIL had an all-purpose summer party. It just happened to be around the time of her b-day, so Brother Atlasta & I made her a GF chocolate cake (well, I did the writing). I made a special stop in Charlottesville on the way to Richmond to get a GF cake mix because Mum assured me that she was not-not-not going to turn on the oven in this heat.


And then! Then, Mum shows up to the part-ay with this:

In addition to various water thingies, I also got some sidewalk chalk: