Parents rap about maintaining their household by videosonlytube
Posted by Hali Chambers at 4:19 PM No comments:

The days are getting shorter now. Here's a view of an early evening walk: 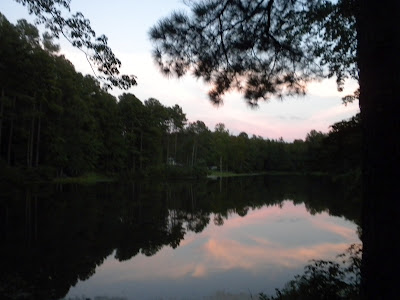 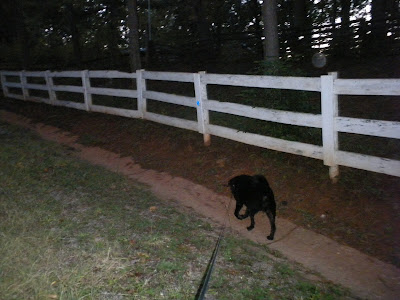 It stops at a driveway and then picks up again on the other side & she goes back: 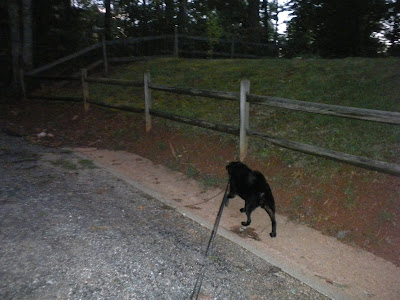 Continuing on our walk:
New moon: 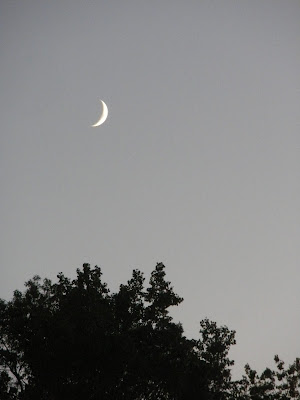 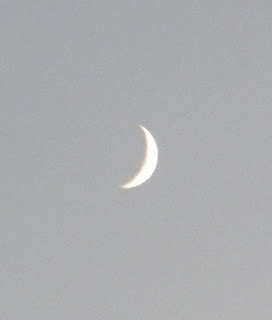 I've stayed on top of the whole flea situation. Lots of vacuuming, laundry & I gave Bingo another bath. This was the third bath I've ever given her, but she has figured it out!  She heard the bath water going and she knows it's for her! I called her and she would come. So this is what I see: 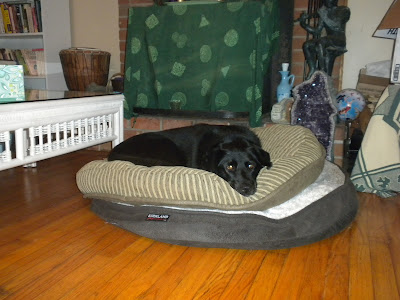 I finally plied her off the bed with treats; luring her into the bathroom. And then I feed her throughout the bath. Poor thing--she's not a fan, but she's v. obedient and lets me wash her down. And she's all fluffy and clean. So then we went over to Brother Atlasta's:


Back in the kitchen: 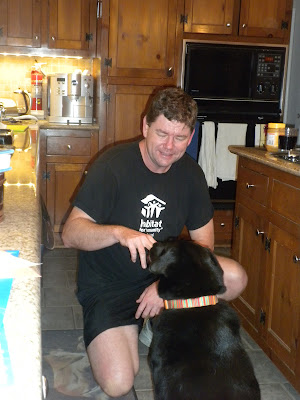 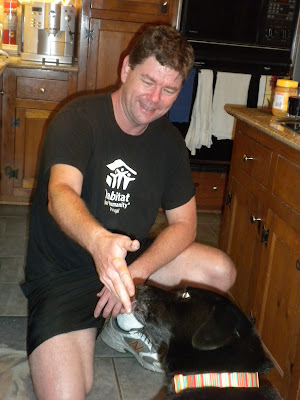 Posted by Hali Chambers at 6:26 AM No comments:


Joe says, "Nerve cells that fire together, wire together." He showed some AWESOME video of actual nerve cells doing just that. It was fascinating!  So I googled & sure enough!  I found a video where you can see it, too. This TED talk is a great summary of the lecture we attended:

Posted by Hali Chambers at 5:46 PM No comments:

Labels: i can do it, joe dispenza

I Can Do It! Conference

Recently Chiro-sis & I loaded up the car & headed to an extended weekend of learning, inspiration, & FUN! CelebratedING cell biologist Bruce Lipton was our prompting to go, but there were a lot of wonderful speakers. I'm going to break this up into a few different blog posts because there was SO MUCH that we did. So here's the beginning:

And I thought, "That's a belief I want to adopt!"  And so here we are almost 10 years later, and I have way more joy in my life than I could have thought possible.  :-)


What Bruce & Gregg have in common is that they are both scientists who go against the mainstream dogma of what is still taught in school. Gregg showed some amazing photos of some archaeological sites of some ancient civilizations. What was fascinating is that they all had in common that there was no evidence of warfare;  they were all peaceful civilizations:

Gregg also showed a photo of a "secret library" in a Tibetan monastery. Isn't that a great question to ask when you visit? Do you have a secret library? It was a 3-story area of 1500 year old manuscripts stacked on top of each other. AND prior to that, things were written on stone tablets (also shown). Gregg asked the monk to summarize the message in the manuscripts:

There's a lot of hoopla about the Mayan calendar & the end-of-the-world. Gregg pointed out that indigenous tribes around the world say that civilizations have 5000-year cycles and that this is just the end of a cycle. Bruce says it's our opportunity to evolve together as humanity and recognize that just as our bodies are made up of a community of 50 trillion cells all working together, that's what we need to do in our world. We need to recognize that we are not separate and that we need to work together as a global community. As part of his keynote address, or as I like to call it, The State of the Planet address, he said we are in the middle of a 6th global mass extinction. The good news/bad news scenario is that unlike previous mass extinctions due to climate change, asteroids, etc. this one is man-made. We're doing it to ourselves--AND we have the power to turn things around. We just need to take a cue from our cells and work together as a community.  :-)  A coupla more pix:

Posted by Hali Chambers at 8:38 AM No comments:

Look how alert she is:

Last week, my dear friend Elaine came for a quick vizzie & we went for a walk: 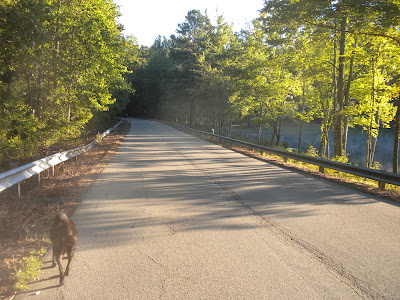 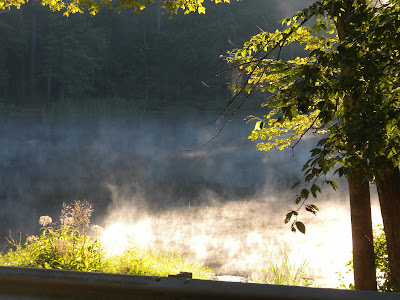 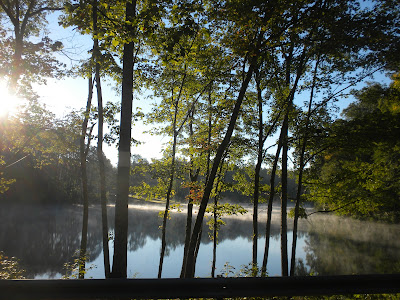 We walked the street that goes along the lake. There has been building across the lake from my house all summer. It turns out it's a Habitat for Humanity house! So we took a quick looksie:


This week we also had a vizzie with Neighbor Rita. I ran some errands for a few hours, so I took Bingo  over:


Rita is a hair stylist & has a mobile hair care business. She comes to you. We did a blog for her this weekend: Wilton Mobile Hair Care. Go see!
Posted by Hali Chambers at 9:19 AM No comments:

This week I was cleaning and before I could put Bingo's beds back . . .

We've been v. vigilant in our Flea Abolishment Program; which means that I spritz Bingo with cedar oil spray (or some combination of lemon, peppermint, etc.) She is not a fan, tho. And as soon as she saw me reaching for the bottle, she squeezed behind the table & under a chair:

This past weekend I went to the I Can Do It! conference in D.C. (That will be another blog post). So while I was away NeighborFriend Rita took care of Bingo.


Then we get back home:

Speaking of sleep, here's Bingo woofing it up this afternoon in the office:

Usually when I get up in the morning, as soon as I open my bedroom door, Bingo comes trotting down the hall, tail wagging.  A few mornings ago, I open the door and head down the hall. Bingo is lying on the floor looking a bit lethargic. She glanced up at me and thumped her tail on the floor a couple times, but didn't get up. Hmmm . . . I went into the kitchen and discovered the reason she was a bit of a slug:

Another day, another thing to eat:

Remember this?
Bingo chases it under the stool: 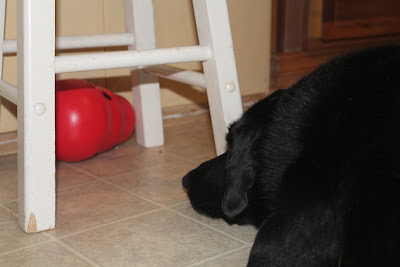 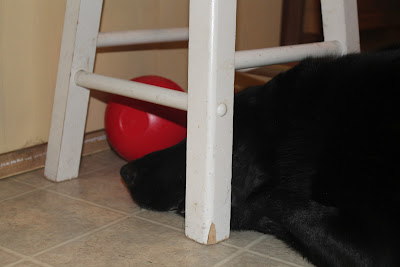 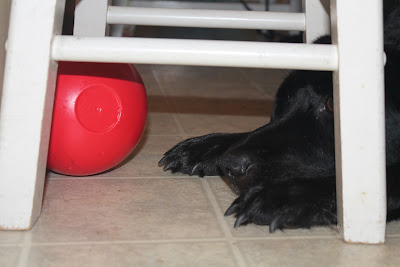 This weekend, we popped up the street for a vizzie with my friend Rita. She has 2 dogs, & will be my dogsitter when I go away. Here's Bingo with Roy: 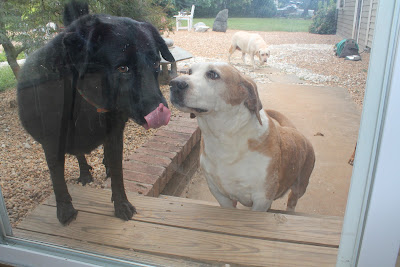 This next picture cracks me up:
And finally this weekend, I did an uber-clean of all bedding & vacuumed. I had stacked Bingo's 2 beds in the living room, and she cozied up before I unstacked them: 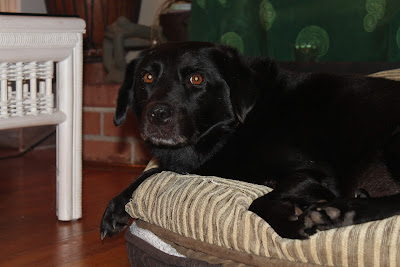 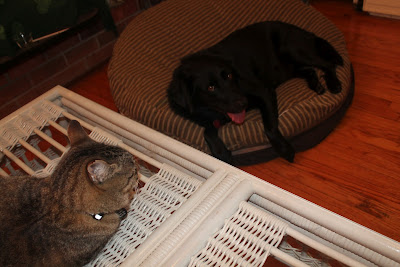 Posted by Hali Chambers at 2:13 AM No comments: