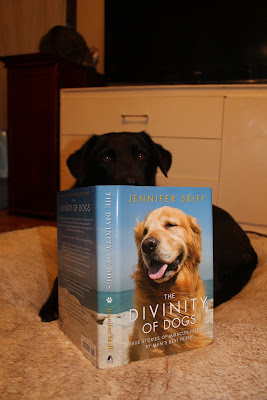 "They may be the purest example of divine love in an earthly soul many of us ever experience. If we take their lead, open our hearts, and embrace their love, we may just find our own journey a lot more enlightening."

The Divinity of Dogs is a collection of dog stories from people of all walks of life. I felt such a camaraderie with all the people featured in this book; fellow dog lovers, many of whom never intended to even have a dog. But you don't have to be a dog lover to appreciate the stories in this book. It is so much more than a collection of dog stories. It is the celebration of the human spirit, as well. The author expresses so well what I know many of us dog lovers feel:

Like many people, I've always been able to count on a dog. I've never truly felt the same way about people. I know I'm not alone, and I don't look at this as a bad thing. I think it's okay. We all have trials in life. It's what we learn from them that matters. I've learned never to underestimate the ability of a dog to provide comfort where a person can't.

What's striking about these stories is how many of the dogs featured were rescues; rescued from abuse and neglect. What's more striking, is that each story illustrates that it wasn't just the dog that was rescued; it was the human who was rescued, as well. How their lives were changed forever from knowing a particular dog.

I wrote to Jennifer Skiff before I finished reading it:

I'm halfway thru & of course have been boo-hooing thru it. Your writing has such a clarity & flow to it and your story is heart-breaking & heart warming all at the same time. Healing happens when we tell our stories but also for the people reading them. Your book is a book of healing and hope, not just for dog lovers, but for anyone who has suffered abuse. It's divinely inspired.

It is one of those books that will have you appreciating your own 4-legged loved ones that much more. I had so many sweet memories of my others dogs come flooding back as I read each of these powerful stories. If you love dogs, you will find yourself reaching for the tissues. Don't let that deter you because you will also laugh and celebrate and have your faith in humanity restored by reading these stories. I can't say enough good things about this book. It is sure to become a classic!

And now a few pix of Tabby Bobcat & Bingo: 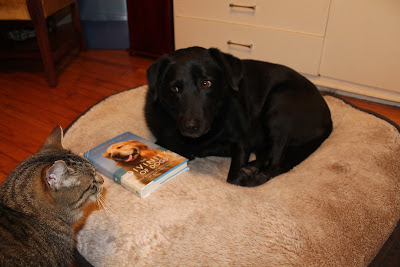 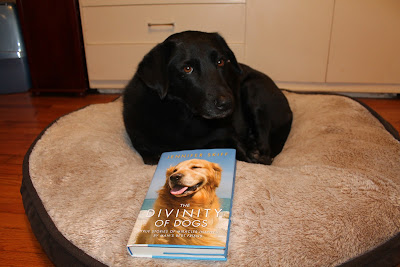 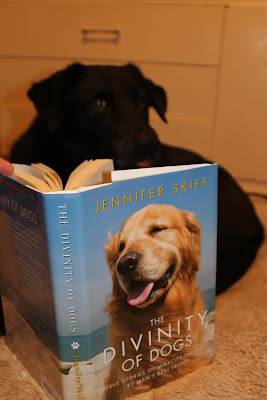 Posted by Hali Chambers at 5:46 AM No comments: 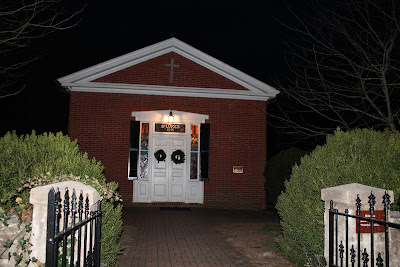 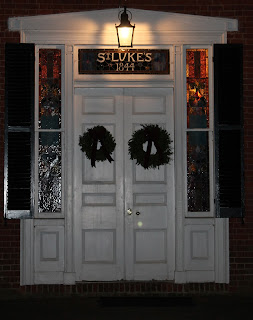 Mum & I have been attending a local Episcopal church. On Sunday, there was a Christmas pageant performed by the children. Now, I love any kind of group performances by children. They are cute and funny and unpredictable. This had the usual costumes of curtains and bathrobes. The Angel Gabriel was dressed in sparkley-tinsel wings and Uggs. My favourite part, and the scene that got the biggest laugh was after the birth of Jesus. Now, apparently, there had been some discussion of having a real baby play the role of Jesus. But his parents said that 5 p.m. was his "cranky" time, and they wouldn't want to risk having a squalling Baby Jesus. So, the part of Baby Jesus was played by a baby doll.

As the narrator said, "Joseph took the baby Jesus and wrapped him in swaddling and laid him in the manger," the boy playing Joseph palmed the head of the doll like a football and tossed him into the manger. He then chucked a blanket on top of the doll. This was worth coming to see!

After the play, there was a reception of gluten and sugar in the church hall. My niece Zoe had spotted a friend in the pageant, so she went to say hi. We stayed for a bit, and as I was standing up to leave, I looked down to notice that my zipper had been down for the entire time. Not so embarrassing except that my very-white long johns were broadcasting hello! in contrast to my very-dark jeans. *sigh* Well perhaps nobody noticed. Except.

15 minutes before leaving, I saw a woman choking. I went up to her. "Can you talk?" I asked. I then grabbed her and Heimliched her. In the middle of the room. Now before I am applauded for my life-saving maneuver, I should point out that in my panic, I forgot Part B, which is "Can you BREATHE?" To which she would have nodded yes. She had aspirated some apple cider as I was walking toward her, so no, she couldn't talk.

When I took Zoe back home, I popped over for a quick vizzie with Mum. As funny as my Baby-Jesus-as-football story was, Mum couldn't stop laughing about my fake Heimlich/downed zipper story. Not the entertainment I was expecting for the evening. There's a saying that goes:

Either you have a good experience, or a good story. Either way, appreciate it.
Posted by Hali Chambers at 10:54 AM No comments:

I looked out the window this a.m. and saw this: 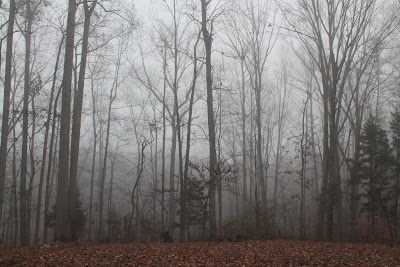 Our walk this Christmas morning: 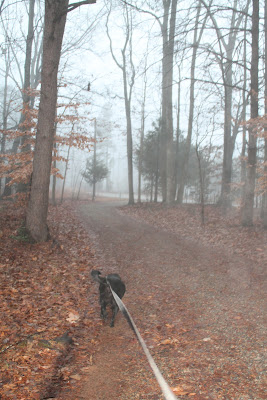 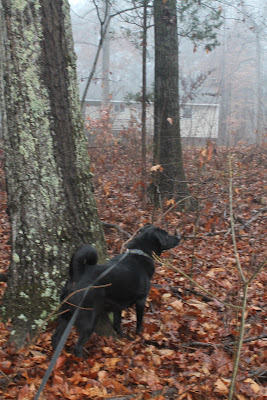 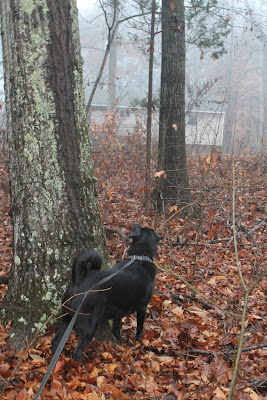 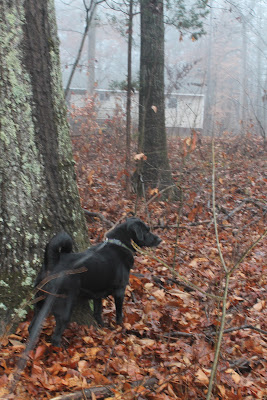 Back to the back yard: 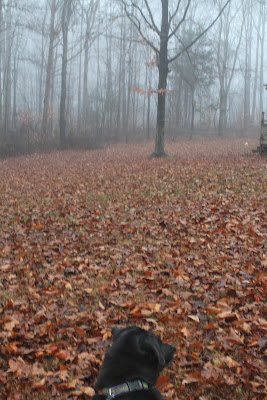 Back inside I try to get festive with Bingo: 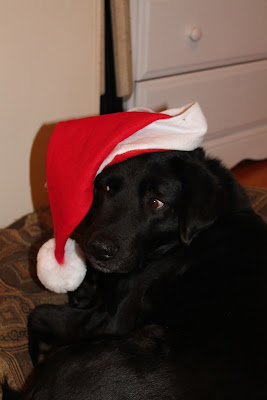 One more try:
Posted by Hali Chambers at 10:04 AM No comments:

Bingo on a Walk

We've had a bit of rain. Here's Bingo sporting her Thundershirt. There's not really any thunder, but we've had a bit of loud noises like gun shots, fireworks, whatever. Anyway, she's much calmer with her shirt. 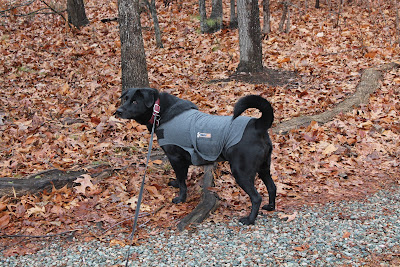 Here is a cute thing that Bingo does on her walks and I finally was able to get a few pix of her doing it: 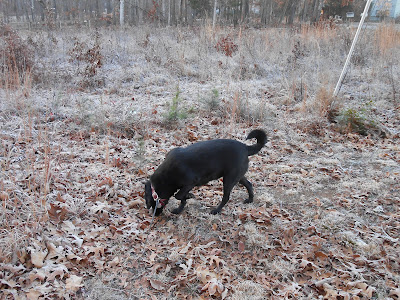 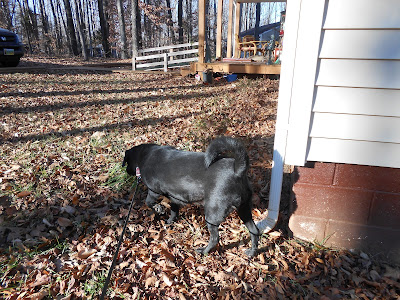 Here we are above the lake. Bingo is fascinated! 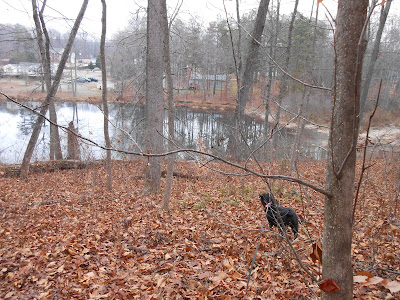 This is what she sees:
Then they flew off: 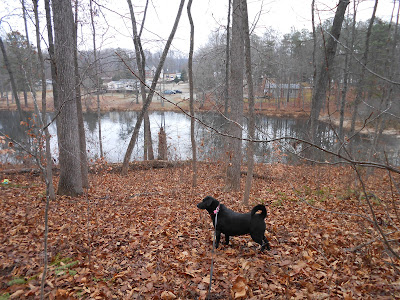 Whenever my nephew visits, he wants to walk Bingo. "RoRo walk Mango?" he says picking up the leash. 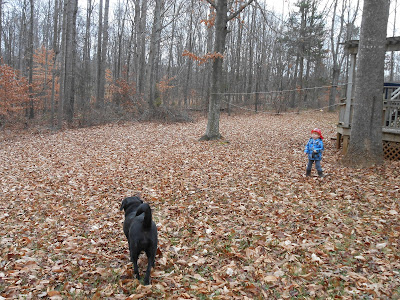 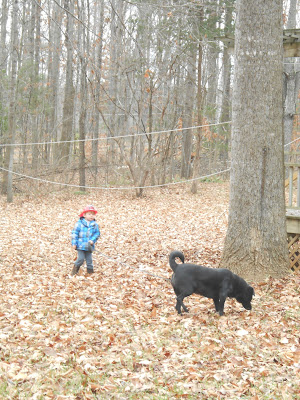 Posted by Hali Chambers at 6:38 PM No comments:

Bingo: Battle of the Beds

Bingo & Tabby both like to sleep on Bingo's bed in the office. If Tabby gets into the office before Bingo . . .

But then Tabby jumps up on the table: 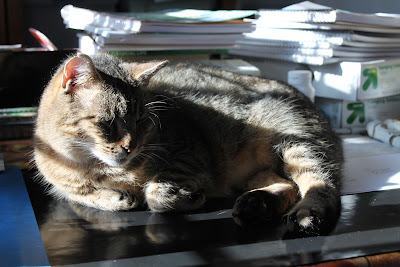 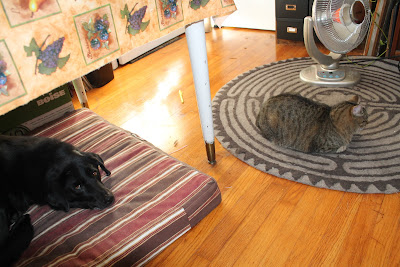 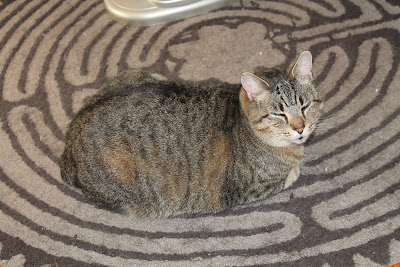 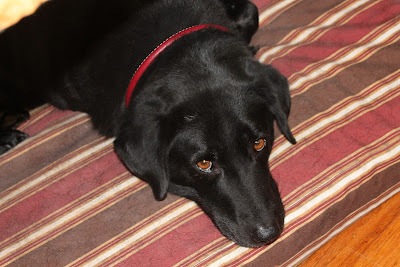 In the living room: 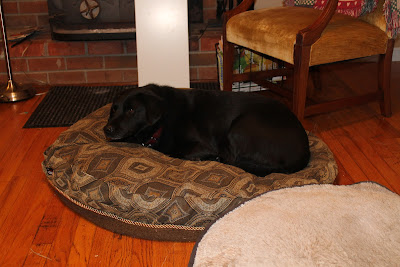 Tabby wants to go out:
Saturday I spent 12 hours painting my living room. I banished Tabby to the porch with food & water, and sequestered Bingo in the kitchen. Around about Hour 8, I ran out of paint so I had to go out. I left Bingo in the kitchen, but she managed to make it into the living room while I was out. WithBu wet paint on the walls, furniture and stuff shoved to the middle of the room, when I saw Bingo's shadow through the window of the front door, I envisioned disaster. She was sure to have paint all over her.
And then yesterday I put all the furniture back and here she is on her bed:

Posted by Hali Chambers at 11:06 AM No comments: