This past weekend, Chiro-sis & I went to D.C. to the I Can Do It! conference. We saw Brother Atlasta before we left, and he was all:

We saw a lot of great speakers, but really all I want to do is be all Blah blah blah blah Bruce Lipton!  Of course. So instead of a lot of repetition about Bruce, here are all the posts where I've mentioned Bruce. And I will do a synopsis of the conference after this post.

One of the great things about hearing Bruce speak is that it's never the same lecture. There's always something new, or a different focus from his body of work. But if I give a summary of what he spoke about, this post wouldn't get finished! So instead, I'm just going to post the pictures with a few little tidbits.

I had left a message for Bruce promising Ruth's delicious gluten-free carrot cake. I knew Bruce would go to Gregg Braden's lecture, so I took a box of chocolate truffles and put them in one of Mum's plarn bags to give to wife Margaret (plastic bags that she knits out of shopping bags). "Sustenance for you while you put together your slides for your talk," I said.

Here's a tidbit from Gregg's lecture: a video of an X-Factor Australia audition to "open our hearts." It was like someone unleashed a truckload of chopped onions in the convention center; we were all boo-hooing. In a feeling-oneness-with-the-heart-of-humanity kinda way, of course:

Back to Bruce: Initially we were going to decorate the cake as a cell. "Oh, I know: a de-nucleated cell!" says I. Hahahaha But we didn't have enough colours to do it. Since Bruce was there for Gregg's talk, Ruth came up with this:
After Bruce's lecture we stayed and waited for him to sign books. "Oh, good," he said, as we walked to the book-signing area. I look at a line of about 100 people (I think. I'm not that great with crowd math). "Not that many people," he says. I've seen lines of people winding out the door, so comparatively speaking, it really wasn't that many! And Bruce doesn't just sign books, he very generously takes pictures with people and chats. So an hour-ish later, we head over to our room and Bruce gets his first percussor session:

And then we just talked. And I started taking notes. And I wanted to video tape, but he'd say, "Oh, this will be real quick." And then we got a lesson on cholesterol (NOT evil; it shows up after the cells are damaged & marks them). We also talked about:
Earth Guardians
Uplift Festival
Organic India
Thrive

All fascinating & could be separate blog posts, but I promised tidbits. And I have to mention that one of the things that sticks out is what he said about tonsils. Tonsils? you may ask. Yes.

You know how babies put everything in their mouths? There's a biological reason for that. Their tonsils are cataloging and recording information about all the microbes they come into contact with & inoculates them. He quoted Dr. Dan Murphy's Hygiene Hypothesis; that the environment is too clean, and is setting children up for allergies.

He also said that there were 3 sets of tonsils, which I didn't write down, so all I remember now is throat and appendix. What's fascinating about the appendix is that it is the storehouse for the beneficial bacteria in the digestive tract. So if more is needed, it gets sent out to multiply. So...NOT useless as modern medicine asserts.

And then we looked at the clock. We'd been talking and not eating cake for almost 3 hours.

So we ate cake. Side note here: when we checked in, I had to sign something promising not to have a party of more than 4 people and we couldn't have cake. How did they know? Apparently they'd had a problem with rowdy parties and cake getting ground into the carpet. We were not rowdy and the cake went into our mouths.

Ruth got him to sign her copy of The Honeymoon Effect, his latest book. I had my copy of Biology of Belief that he had signed before, so I asked him to sign again. Because, why not?

So it was an AWESOME weekend, and our vizzie with Bruce was icing on the GF cake! On the way back home, we stopped at this rest stop:


P.S. This is not related to anything, but this was a picture in our hotel room that I took for Mum. She has a calendar of similar travel artwork that she grew up with, so I thought she'd appreciate this. LOVE you, Mum! 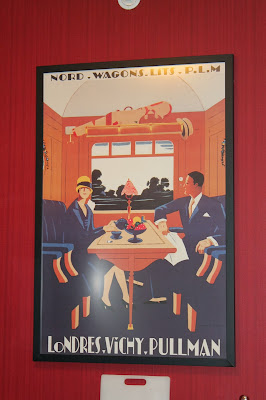