After a bit of a doggie-blog-type break, we're back!

Every day at 4 o'clock, Bingo trots to this spot:
I looked out my office window and saw this:
I got this for him and put it in his crate. And then I would see it chucked out of his crate. And I'd think, maybe it got caught on his foot as he was coming out. So I put it back in. And out it would be on the floor the next morning. So I thought maybe he didn't like it. And then one day, it was in the yard. I went outside to take a photo and Reggie jetted down the stairs:

But he came back:

And took his toy down to the grass:


Bingo settles in to one of her spots:

And then he joins Bingo:


Under the deck is another source of entertainment for them. There's a few random things under there like an old cooler and some plastic party cups. I'm not crawling under there! Now I don't have to. Reggie brings stuff out and strews it all over the yard! Lawnmower Ben has his work cut out for him this spring!

And back to snow eating:


Here's the same photo doctored up: 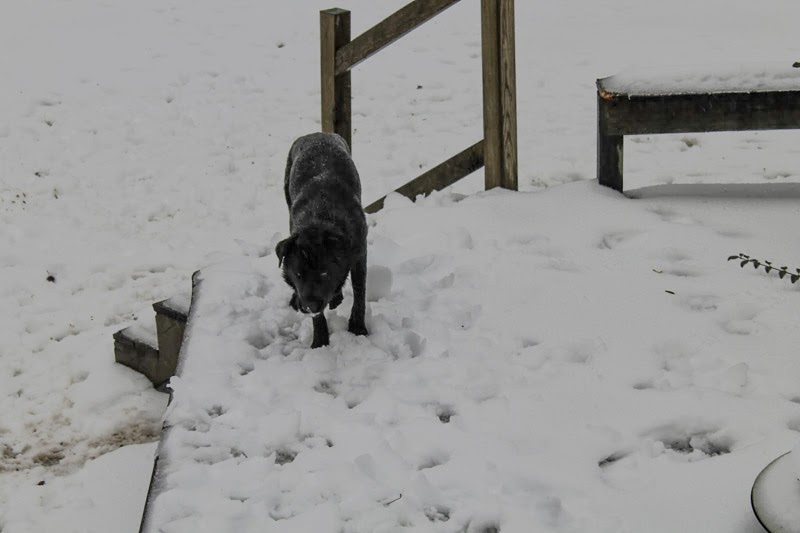 And then it's back to eating snow:


I like to watch the dogs out the window:


Then he hears the camera:

Sometimes it's just too cold to leave the door open! And then this:

Another view out the window:
Later on, there's excitement at the neighbor's:
Aaaaand back to the porch:


And that catches us up!  I did have a scare with Bingo. There was a knock on the door from my neighbor who says, "Is this your dog?" And there's Bingo standing in the driveway behind her. How did she get out of the fenced-in yard?!!  Well. We had all that snow. Then it melted AND rained and she SLID in the mud under the back gate that goes down to the lake. So I got a long post to block her from doing it again. So far, no more Houdini impressions!

It's snowing again today, so there will be more snowy pix next week!
Posted by Hali Chambers at 6:30 AM