What would you take? 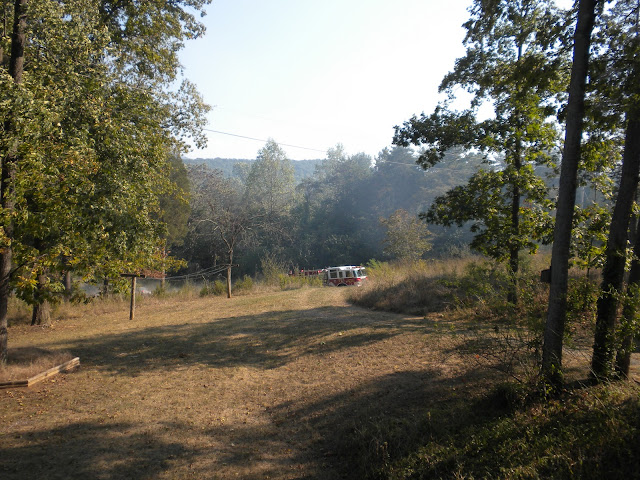 I went down to the garage and it smelled like smoke. I looked out the windows and I see smoke coming from my neighbor's. I thought, What is he doing burning on a day like today?!  It was so windy. And the smoke was blowing in under the garage doors. And then I realize that the power is out. So I call Neighbor Dave. He answers with, "Hi, Hali. Yes the power is out. There's a fire and the fire department is on its way." Oh. So it wasn't the (other) neighbor burning trash. The wind knocked down a tree and took the power line with it and sparks flew and poof! Forest fire! Up behind Fisherman Willie's house. Yikes!

So long story short, I decided to "get out of Dodge," as my friend Susan advised. I packed everything as if I was going to lose it all in a fire. All my John Morgan stuff in a suit case, an overnight bag, my Important Box (with important papers), and my family photos. And my foot bath with tuning forks and whatever other healing modalities I could throw in the tub. It was so HOT, and the house smelled like smoke from the wind blowing it in as I loaded up the car. I called Neighbor Dave & told him I was heading out. And then I asked if he had taken any pictures of the fire. "That wasn't my first thought," he replied, dryly. If I were braver, I would've gone up and taken some photos. I dropped the dogs off at Mystic Pet and went to Mum's. Exhausted. But it made me think about all my stuff. And how attached I was to it like one of those pack-rat-hoarders you see on HGTV. And at the same time, I heard XM Radio Guy saying, "If EBay has taught me nothing else, it's that everything is replaceable." Indeed. Except the 90-year old photos of Mum's family in England.

Neighbor Dave called later that night to let me know the power was back on. And so I picked up the girls the next day and headed back down my road, where I saw flares on the road and then this: 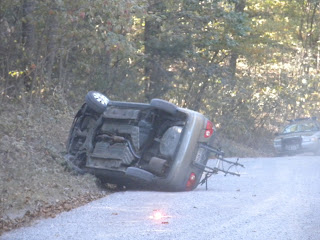 Yikes!
There were two woman sitting on the side of the road behind the car. I slowed down and said I was glad they were OK and I wish I had some emergency chocolate for them. Sometimes, it's the thought that counts. I didn't lollygag--you can see the police car up ahead and he was talking to some young guy. I've never seen anything like this along the road. I saw evidence of spinouts when we had snow, but wow! You have to be careful on a gravel road.

I say get the hint and really get out of dodge!