As part of writing Healing Dogs with Love, I'm also reading a few other memoiry-type books. Ever by My Side is another AWESOME book! 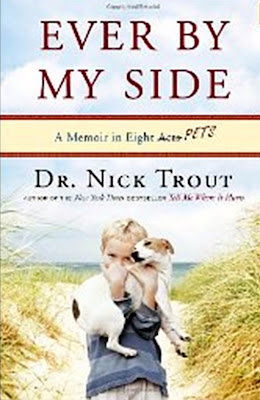 "For some of us, living with a pet can be a bit like finding religion; once you've been converted, it's hard to imagine life without them."  (p. 237)

Vet surgeon Nick Trout is an English transplant who can weave a tale with that delightful Brit humour. As I was reading it, I heard Hugh Grant narrating in my head. It's a book about all the important dogs in his life, but it's more than that. It's growing up in England in the 1960's:

". . . an era when children led "under-scheduled" lives, kicked out of the house at eight o'clock in the morning, only allowed back in if there was no more daylight, you were suffering from clinical  dehydration, or you had sustained an injury requiring nothing less than a blood transfusion or surgical removal of an appendage."   (p. 12)

And a dose of the '80's from the perspective of a brother:
[Sister] "Fiona . . . huffed her disapproval [about dogs] and went off to tease her hair, or listen to Duran Duran or hunt for her missing Dynasty shoulder pads. (p. 86)

I love his descriptions:
During his internship he calls one of the vets Dr. Malcom Snide, "his facial expressions were difficult to read since he was cursed with a deep furrow cut into the fleshy skin between his bushy eyebrows, like an ax chop on a log, that rendered him permanently vexed, perplexed, or dismayed, depending on what I said."  (p. 131)

On living in America: "How had I failed to notice the American car culture? Why did everything necessitate a vehicle? Why did it feel as though so much of my day was spent in a vehicle?" (p. 169)

"It's funny, living in America has made me notice how much the English, and I am sure I am included in this generalization, never answer with a simple yes or no when there's an opportunity to ramble." (p. 289)  [OMG!  THAT's where I get it from! Thanks, Mum! ;-) ]

His story is a journey of dogs and vet school and moving to America. Getting married, having a child with Cystic Fibrosis, and many of the animals he performs surgery on (including a bobcat)! His writing is entertaining, heartfelt, and sleep-depriving. I'm sure he could write a short story about watching grass grow or paint drying and it would be mesmerizing.

I will leave you with this quote, which is very comforting for anyone who has lost a beloved pet:

"When I think back to those devastated owners who are unable to move past the loss of a beloved dog, left numb and incapable of a future with a different animal for fear of falling in love again, I can now point to my father as an example of what is possible. Every dog is unique--their quirks, their impact, the way they interact, and the emotions they draw from us exclusive and unparalleled. Admittedly, love and loss may be universal, but as my father will attest, it's never the same, you are not being unfaithful, and however much it hurts, it's worth it."  (p. 284)
Posted by Hali Chambers at 9:19 AM