Readers of this blog will recall my Bedroom Remodel of 2014. It was time for another one. After that one, I had switched the bed over to the opposite wall and Mum had made me a headboard. But I don't have any photos of that one!  I did capture it on my last Jammie Chat, tho.

Here's the before-the-headboard on the other wall set-up: 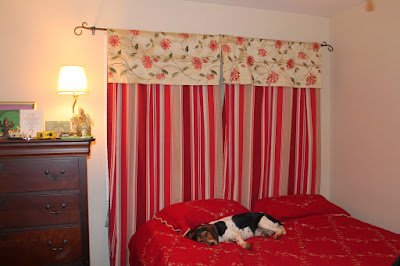 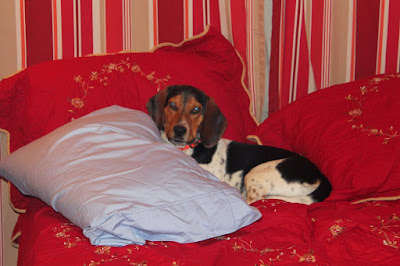 Sheet-as-curtain hanging on left is my closet: 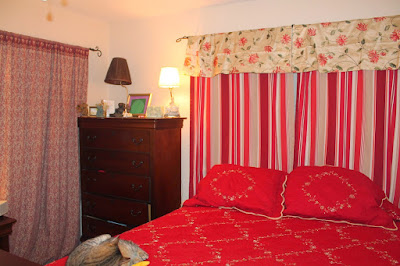 This is my dresser-as-baseboard:
I even had room for a little reading corner: 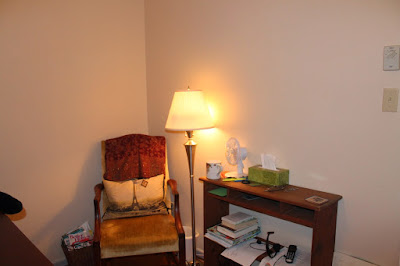 I was going for an Oasis-tent-along-the-Silk-Trail kinda vibe. But then I saw this photo on Pinterest of an opium party: 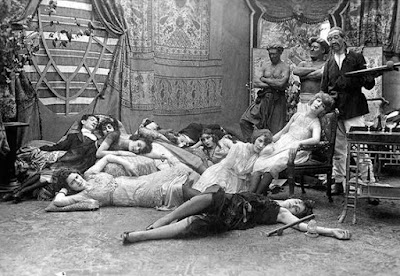 Oh, lookit!  A pile of people!

But what I really thought was, Oooh. Nice wall hangings.

What prompted the most recent re-do was watching Dave Asprey's Moldy Movie, which then prompted a ton of research on the effects of toxic mold. If you've not seen the movie, check it out. And if you've ever had even the tiniest water leak, beware. Toxic mold can be linked to neurological, chronic, and mysterious illnesses. You know; just like gluten and thyroid disease.

Back to the bedroom: there was a family that left their moldy home, but brought their mattresses with them because "but they're brand new!  We just bought them!" And that's why everyone was still having respiratory problems. So it got me to thinking about my mattress that I'd had for 12+ years and had been in another house where there was a flood in the basement. I gave it the sniff test and it really did have a musty smell to it. So when Lawnmower Ben was over, I got him to help me get the mattresses out. I also had to get rid of the headboard. Basically, the rule for anything that could have toxic mold is if it's more than an inch thick and can't be washed in a washing machine in HOT water and borax, get rid of it. Because I had the mattress topper encased in a waterproof cover, it was okay. Yay!

Here's the new set up:
That's a "Tree of Life" tapestry behind the pillows. Thank you Opium party.

Buddy still uses the beagle/cat steps to get on the bed: 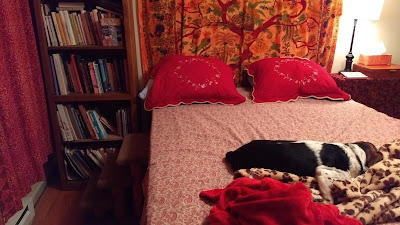 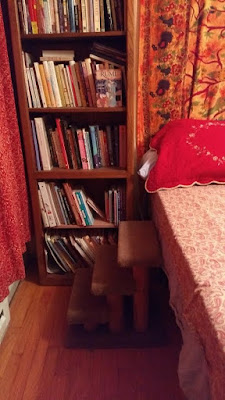 One day my niece was visiting and tried to exit thru the curtains at the closet. She was a bit embarrassed and I said, "Yes!  Thank you. That's the look I was going for; that it would look like an entrance into the room. You just showed me that I did a good job!" 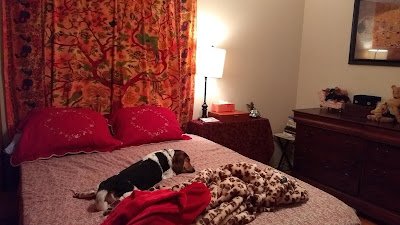 My nightstand was stacked high with books, so yesterday I switched it with a little bookcase. You can see it to the right of the bed, with the pashmina throw covering it. Or as John Morgan would call it, drapey-table-cloth-thingie. But do you see what's in the corner?
I still have a bit of a secret . . . because it looks like a real bed, doesn't it? Well:

I didn't want to rush into buying a whole new bed. As a temporary solution, I got out my unused massage table and fashioned a new bed with the mattress topper. Holy Heck was it comfortable! An added bonus was that for the first time in forever, I woke up without stuffy sinuses. Yay, me! So I wasn't really in too big of a hurry to get a new mattress.

The only problem was that Buddy, the beagle-bed-hog, did not have enough room!  On the third day I woke up to him on top of me, s-t-r-e-t-c-h-e-d across my torso. I opened my eyes to face his backside.  Ewwww!  Beagle backside!  I hate waking to beagle backside!

I was explaining my dilemma to Chiro-Sis and she graciously offered me one of her massage tables. And voila!  I have a queen-ish sized "bed." What's really great is that it's just a smidge shorter than a standard bed which means that I can fit it against a different wall. AND the tables are so lightweight that I just scooted them across the floor as I decided which wall they should go on. 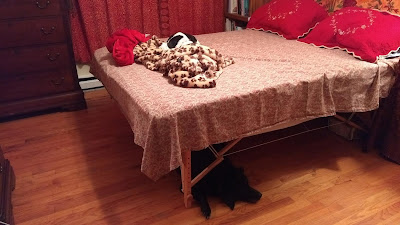 This set up is working really well!  And I really don't see myself getting a "real" bed, anytime soon. Besides . . .