Mum's friend Stanley-from-The-Orkneys came for a few days. You may recall I told the story of how Mum hitchhiked up the coast of Scotland when her flight was canceled. Sir Stanley was her ride. He's smart-funny-brilliant with the handshake of a lumber jack.

He lived in India during WWII and had a pet cobra. His Indian friend said he should have one for good luck, so they went to a snake charmer & he removed the venom sack from the roof of a snake's mouth. It was about 2 feet long, & Stanley used to keep it in his jacket pocket. It would climb up his sleeve and come over his shoulder. That was all well and good until some women came to join their company. So he returned the snake to the snake charmer & the snake charmer says, "Where have you been? You were supposed to come back after 6 weeks." Stanley asked why. "Because the venom sack grows back." He'd been carrying a fully-loaded, venomous snake in his pocket! Ah, good times.

On Monday, Stanley & Mum came over for lunch and rescued my new silverware from bondage. 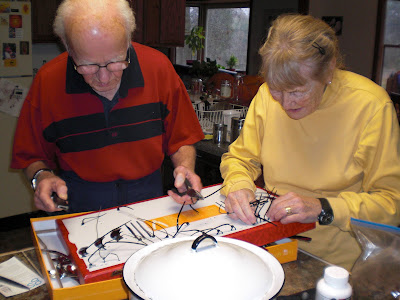 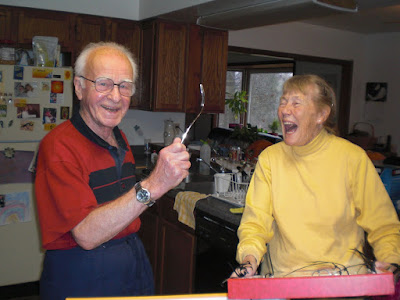 HURRAY!
We had pumpkin soup & some sort of squashy thing, & proper tea. Stanley was talking about polar bears and said, "They say that polar bears are generally well-fed and that you're supposed to stand still and they won't chase you. What I want to know is if the polar bears know this rule." Hahahaha 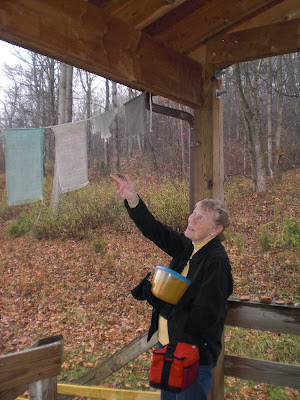 On the way out, Mum holds pumpkin soup & points out my tattered Tibetan prayer flags. 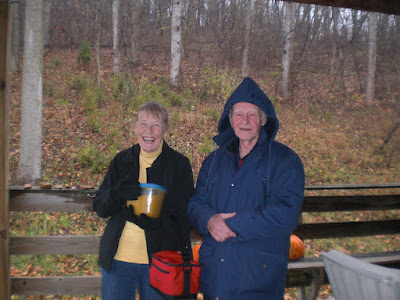 Mum leads the way down the dog ramp. 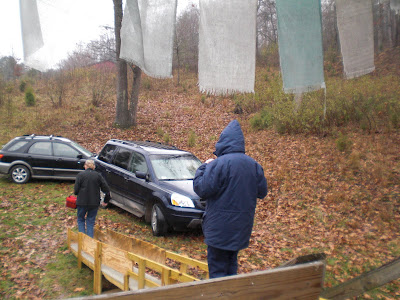 What a delightful visit!
Posted by Hali Chambers at 6:17 AM

Great to see some pictures of my Dad enjoying himself with your Mum. :)

Hi Morag!
Thanks for stopping by. Your father is an absolute DELIGHT! We had such a good time! :-) H.