She went downhill very fast. She'd been having problems getting up; her hips were really bothering her. She had a specific panicky kind of bark when she was stuck on a slippery surface and couldn't get traction to get up. This was why I covered every bit of floor that I could & secured it with duct tape; so that she wouldn't get stuck. But she started doing it on the back porch at the River House & then she'd bark that Help me, I can't get up bark. So then she'd sit up and then I'd help lift her back up to a standing position and then she could walk.

She didn't like the new house. I could tell she missed her favourite window in the living room to look out across the front field. Even if she could see out the window here, there isn't the wild life or trains or planes or anything else to entertain her. Just the driveway with trees. I thought she might like the back porch, but she went out once & never wanted to go out again.  Not like when we were at the River House.

On Tuesday, I had the TV/internet installed. As a Comcast guy was walking by her, she did a slow motion snappy-bite at him; v. uncharacteristic! Wednesday she would only drink the soupy part of her food and Thursday morning she woke me up at 1a with her Help me, I can't get up bark. She was on the runner by the front door & I thought she might want to be in the LR on carpet or on a bed. So I tried to help her up and she reached around and BIT my arm. I still have an egg-sized bruise to remember her by. She barked periodically thru the night, but stopped barking when I came to her.

Thursday morning my friend Susan called out of the blue. I told her I couldn't move Millie and she couldn't get up. She suggested I do a Reiki attunement on her. Hadn't thought of that--nothing else I was doing was working. So I did and she calmed down. And fell asleep. After that, John Morgan called and suggested I use a broom to maneuver her--which would save my arm or any other fleshy appendages she happened to get near. I used the broom handle to get a towel under her and then I was able to lift her up like I had done with Maggie when she had her vertigo. She was grumbly about it, be we managed to get outside. As I was helping her along, I thought that maybe she was having vertigo like Maggie had last year.

When we got back into the house, I took her back into my office so she could be with me as I worked.  I couldn't get her up to go outside again after that. She wouldn't eat, but would take a bit of water and a treat. I made a vet appointment for Friday morning in Richmond, but canceled it because I couldn't get her up. I called my old vet in Luray and made another appointment for the afternoon. In the meantime, I was checking in with my brother to see if he could help me get her loaded into the car. He was stuck in meetings all morning and couldn't get away. He gave me the number of a mobile vet that makes house calls, so I left a message on their machine and then I called back every 20 minutes. No call back.

Friday she wouldn't even drink water or take any treats. When Maggie came near her, she grumbled and growled a Stay away from me growl. I was beside myself with grief; knowing that this was the beginning of the end. John Morgan called for an update. She was sitting at my feet, towel still wrapped around her back. He told me to ask my neighbor to help me. I'd been holding out for my brother to help me or the home visit vet to call. I canceled the Luray appointment and got the number for Claws & Paws, a few miles down the road.

Hi, you don't know me, but can you help me get my dog into the car? I was standing on Neighbor Thomas's front porch weeping. He was very kind. We'd met briefly on the day I closed on the house and I'd met his little Jack Russel & sweet Rottweiler. We managed to get a blanket under Millie and carried her to the car. It was the first time I'd separated Millie & Maggie. When I first got them, I needed to take Millie to the vet and she refused to get off the porch without Maggie. And Maggie stood behind the closed french doors howling. And then Millie started howling. So in the end, I ended up always taking them together no matter who the actual patient was.

Neighbor Thomas told me that Claws & Paws was his vet, and that they were really nice. It was not very far, but everything seemed in slow motion. I knew what I was driving there to do. No matter that I've done this before, it's the hardest thing. I know--I know. She was old and in pain and infirm. It's the humane thing to do. Still hard. Still horrible. The best of good-byes always are. I was just trying to see thru my tears as I'm also trying to find a place I've never been to before. Not the easiest thing for me in the best of circumstances.

I wiped my face & blew my nose & went in. I stood at the front desk and as soon as the receptionist looked at me I started crying again. She handed me a clip board & I stared at the form. Where do I live? What's my address? What's my phone number? I couldn't remember any of it. I'm sorry, I can't remember any of this. I just moved here.  I consulted my phone. The other receptionist handed me a tissue. Thank you. I finished filling out the form and went back to the car and crawled into the back with Millie and snuggled in with her. I stroked the crook of her nose, her favourite spot. I told her how much I loved her and how she made my life so much richer for being in it. I thanked her for being in my life and my heart, and for making my house a home. I was thinking of all the sweet, quirky things she did and how she made me laugh and how she made my heart melt with her sweetness.

The vet came out to assess her and pointed out the lack of muscle in her hind legs and how bony her head was. I told her I thought it was time to let her go, but I wanted her professional opinion because I couldn't make this decision all on my own. She said she thought it was time to say goodbye. She went back in to get the euthanasia paraphernalia and came back out with an assistant. I said, "You didn't know her, but she was a really wonderful dog." And the vet said, "I can tell that she was very special." Whether that is true or not, it was such a kind thing to say. They were both so wonderful. Millie drifted off as I continued to stroke her nose. Then they lifted her out of the car.

I waited in the car for the final paper work and the assistant came out with a plaster cast of Millie's paw print.  How sweet and thoughtful is that? It made me cry even more. 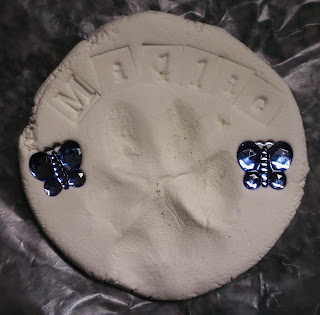 And so here we are, just me & Maggie & Tabby. She's not whining or howling. I've been putting Ingatia in her water. She seems to be OK. Last night I gave her athe rest of her Mercola dental bone. She's never eaten one. Millie used to wolf hers down and Maggie would sit there and lick it. Then she'd carry it around & leave it on her bed. I'd get it & put it with the new bones to give her the next time I gave Millie one. Millie had managed to get a bite out of this one but I rescued it because they're not supposed to have more than one a day. This morning she took the bone out with her and sat down in the grass and ate it. I sat on the porch steps with my tea and watched her. I thought how death is so . . . permanent. And some changes are, too. Good-bye, sweet Millie. I love you.
Posted by Hali Chambers at 12:52 PM

Hi Hali,
My heart goes out to you for the loss of your Millie. May you, Maggie and Tabby find peace and comfort during this sad time. *hugs* K (a long time reader of your blog)

Thank you so much for your kind words and support. Hug back, :-) H.

I'm so sorry to learn of Millie's passing, Hali. She and Maggie are so lucky to spend their golden years with you. Take comfort in the memories...what a wonderful gift to have so many vivid pictures and stories of your time together. Keeping you and yours in my thoughts...

Hi Deb,
Thanks so much for stopping by & for your support. You were one of the people who inspired me to start M&M Mondays, because I had so many rescue people asking for updates on the girls. They had a lot of people who were pulling for them! :-) H.