Well, some excitement in the past week along with some breakthroughs. 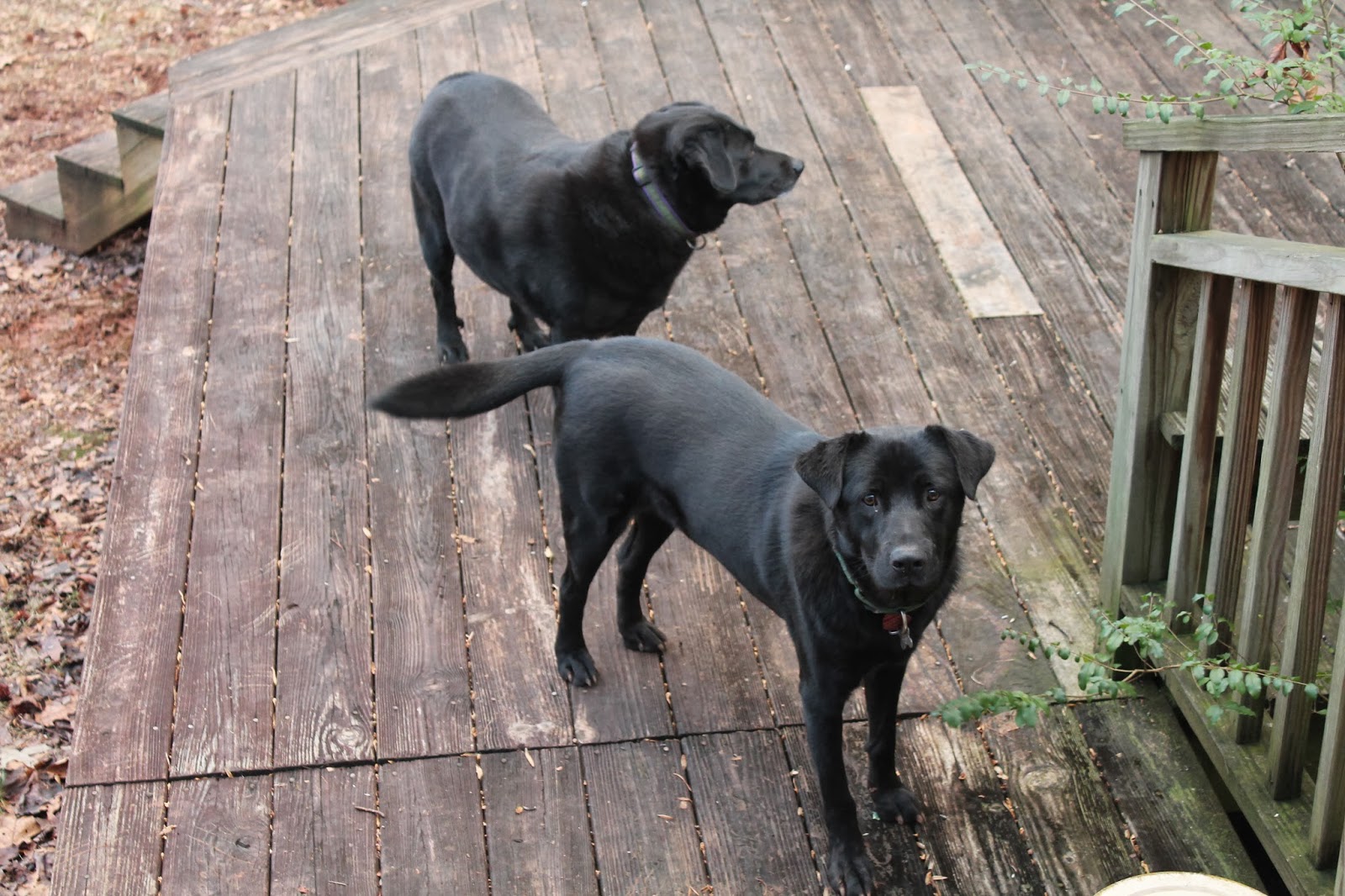 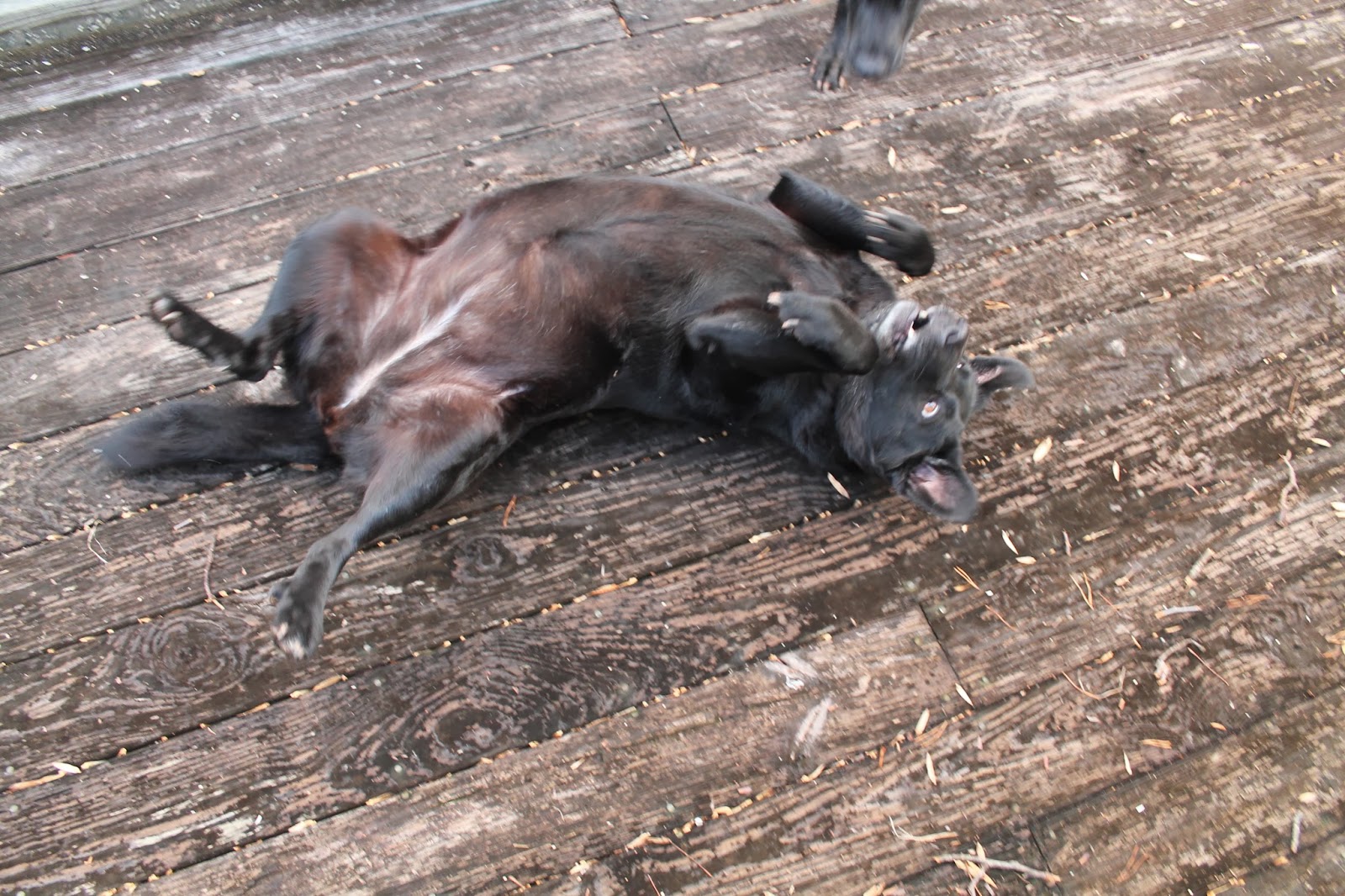 And then!
Which seemed to accumulate more on the back deck . . . 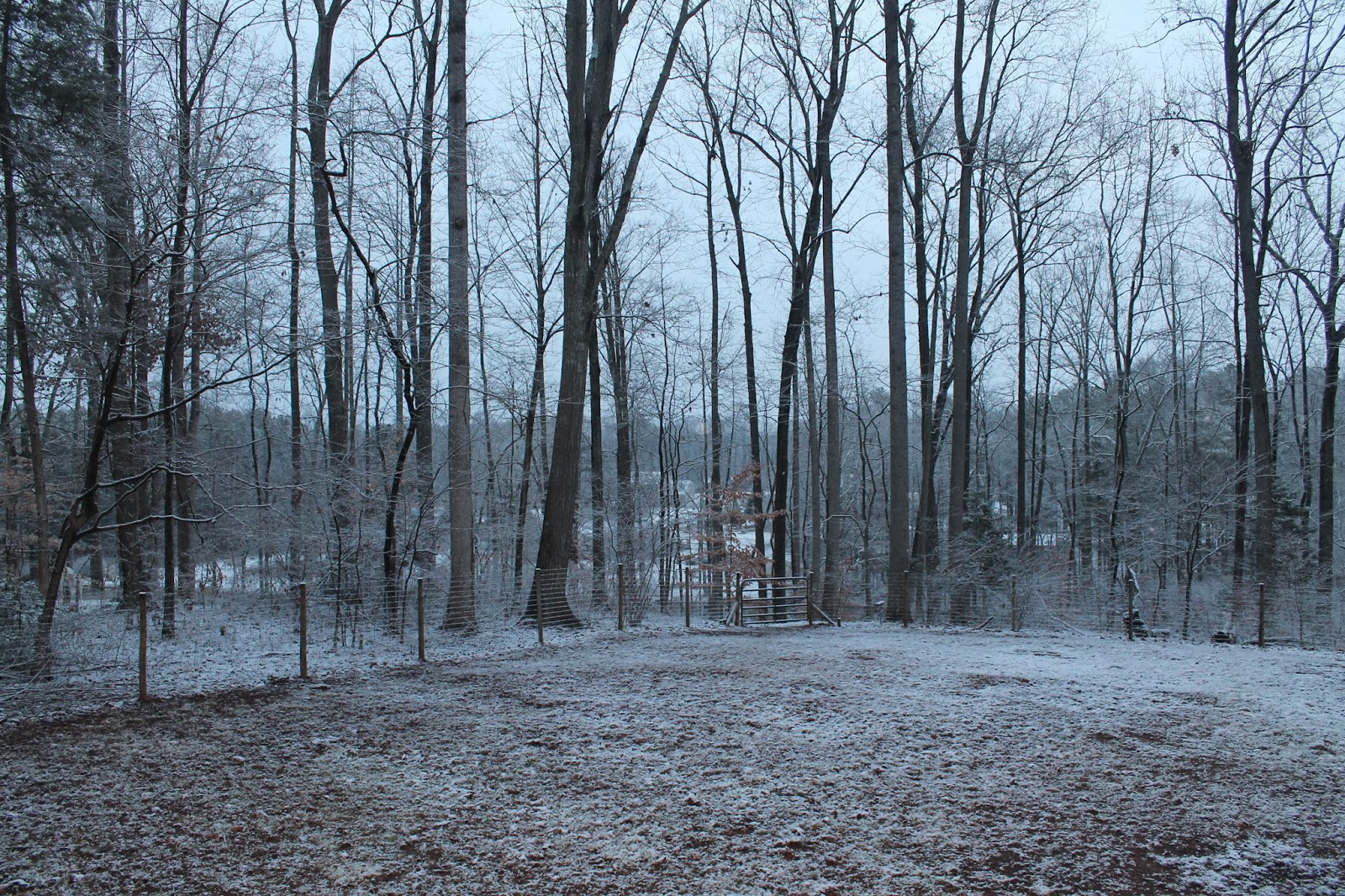 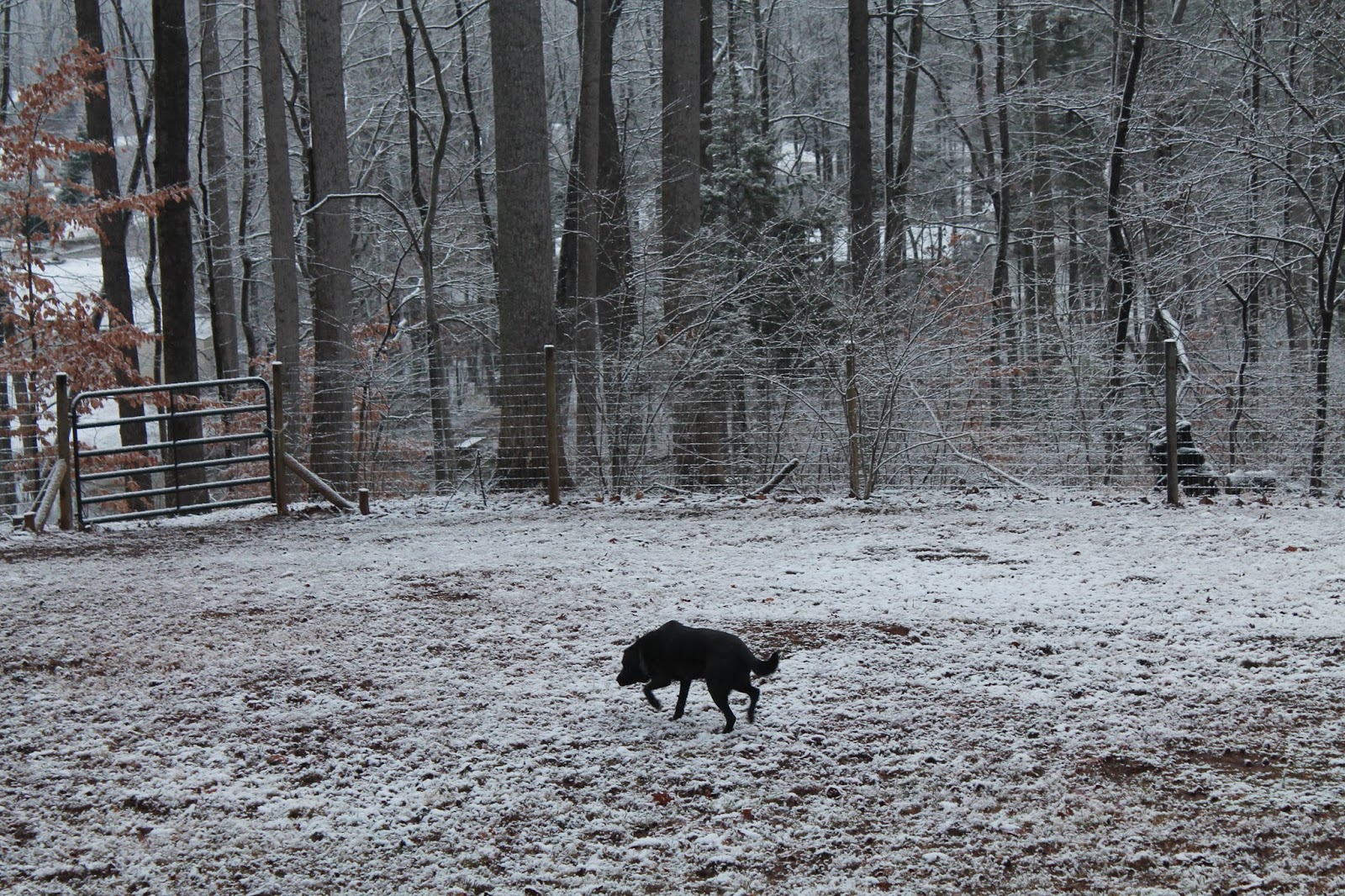 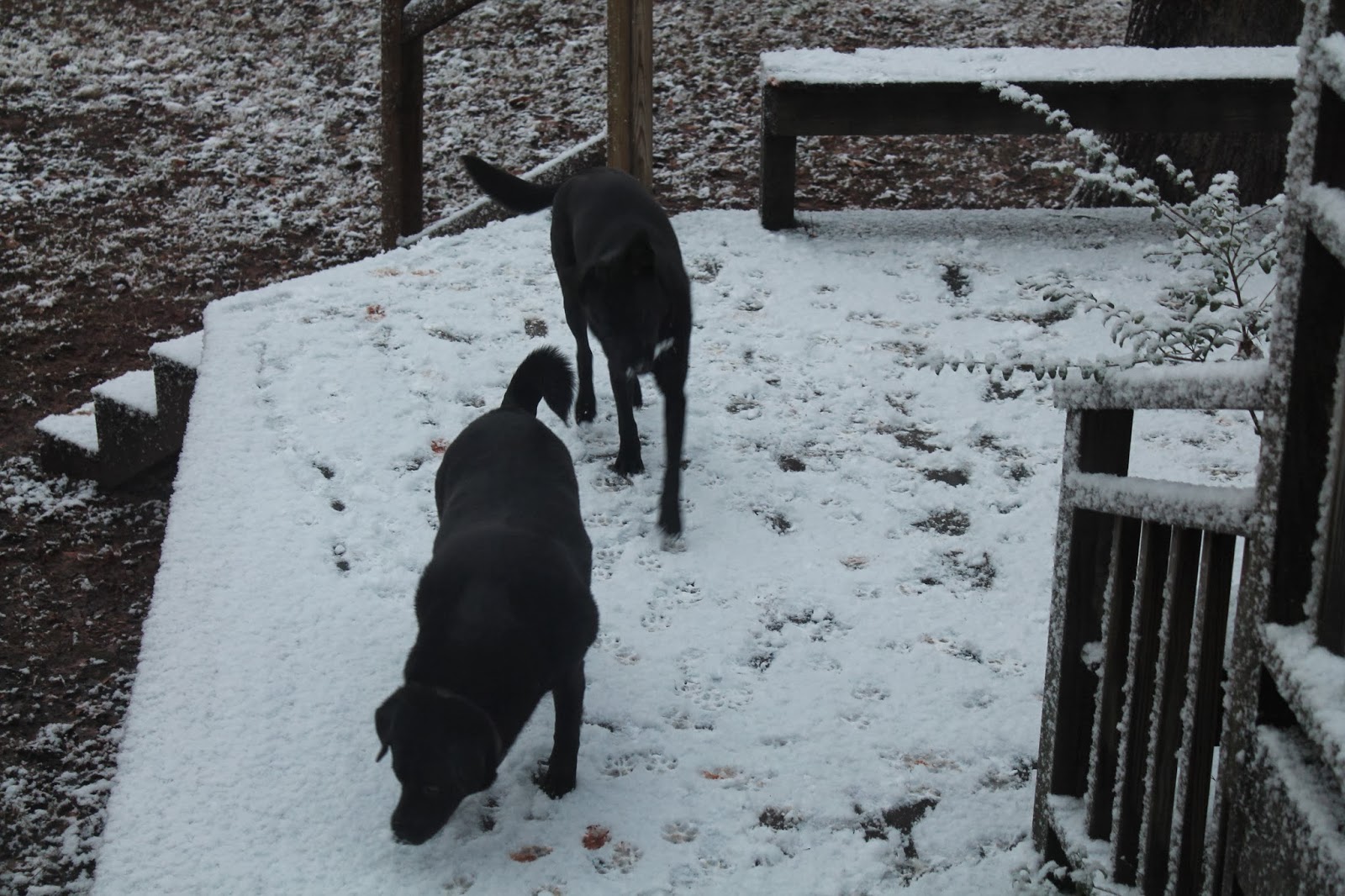 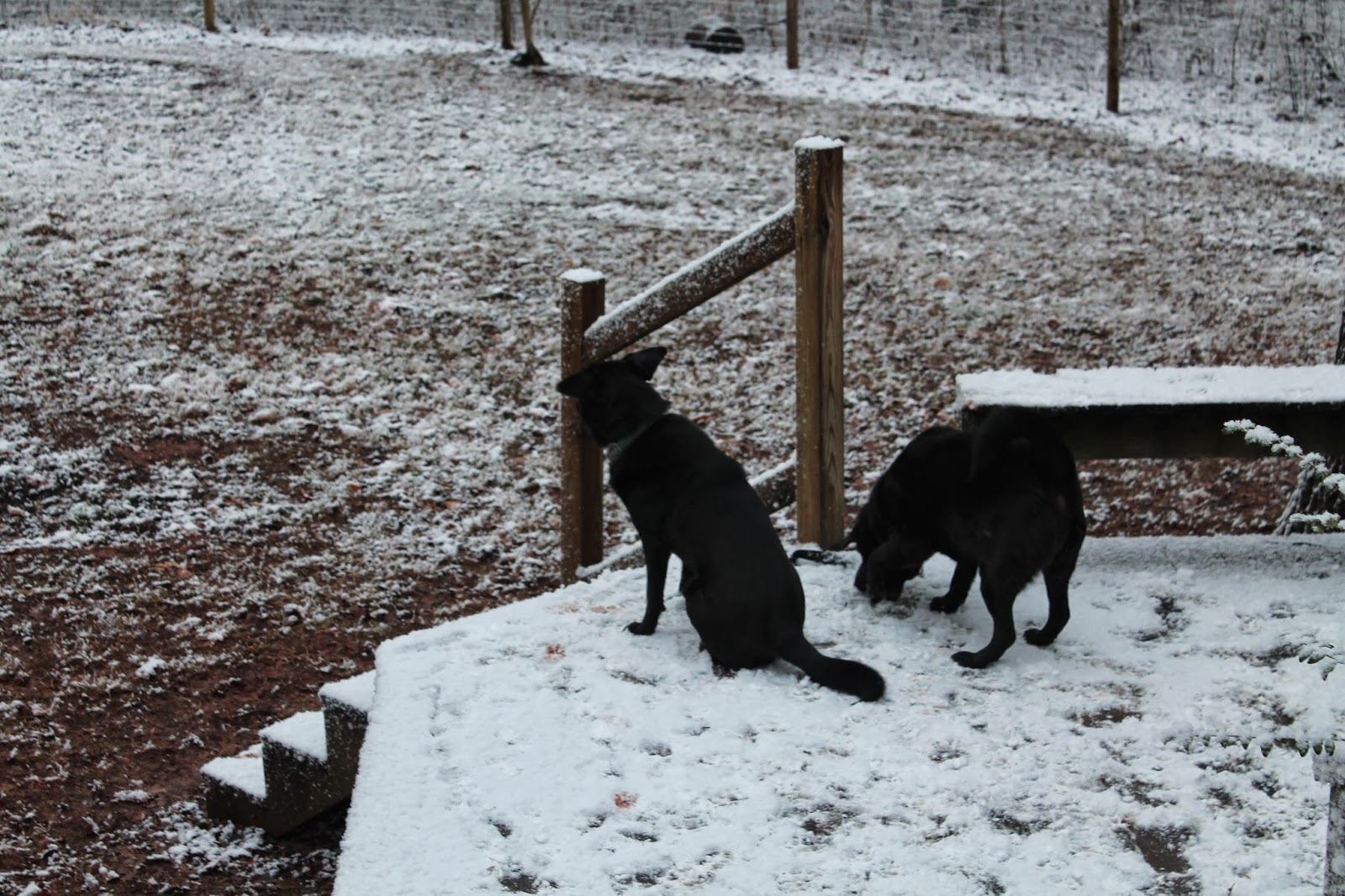 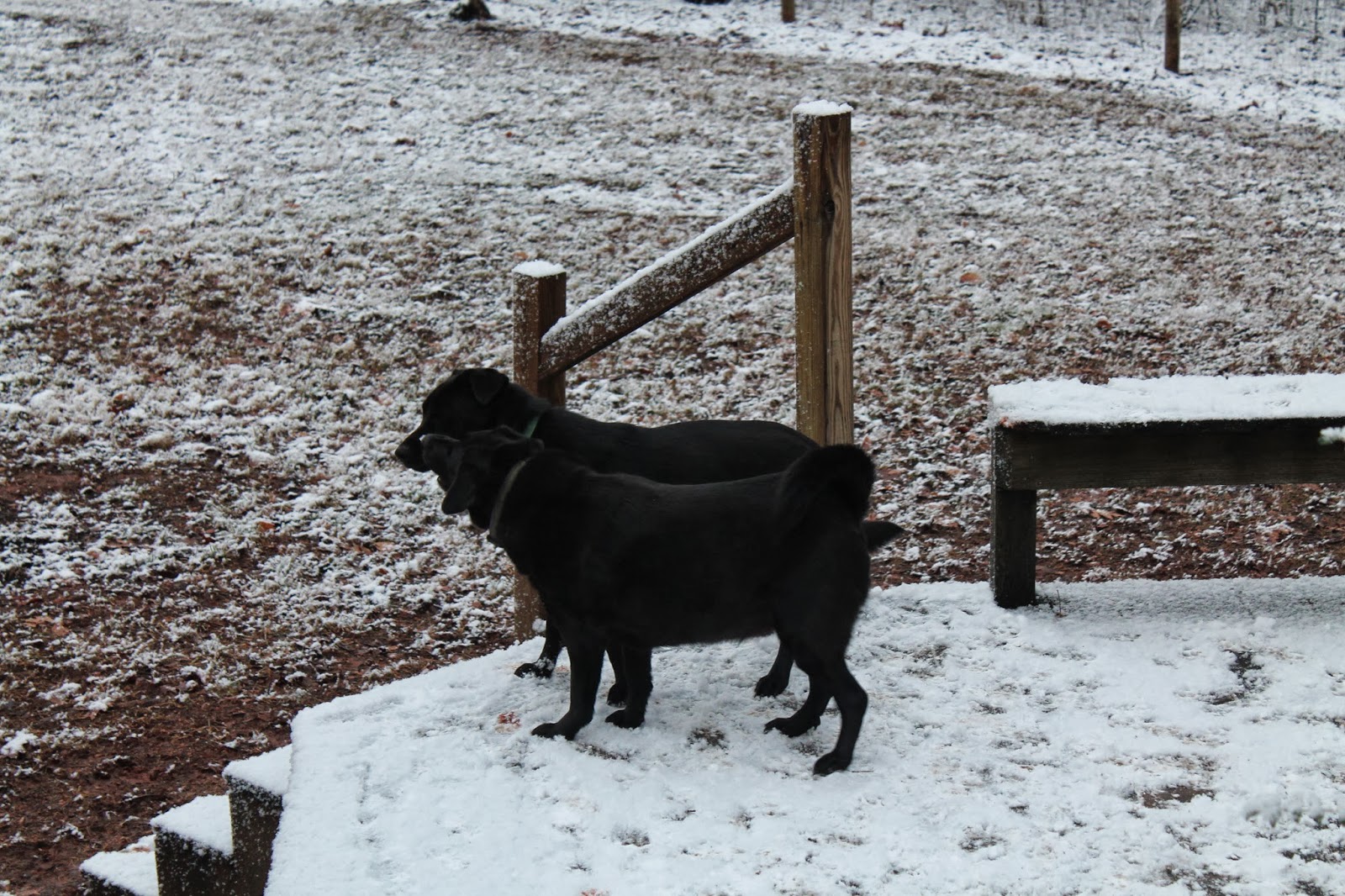 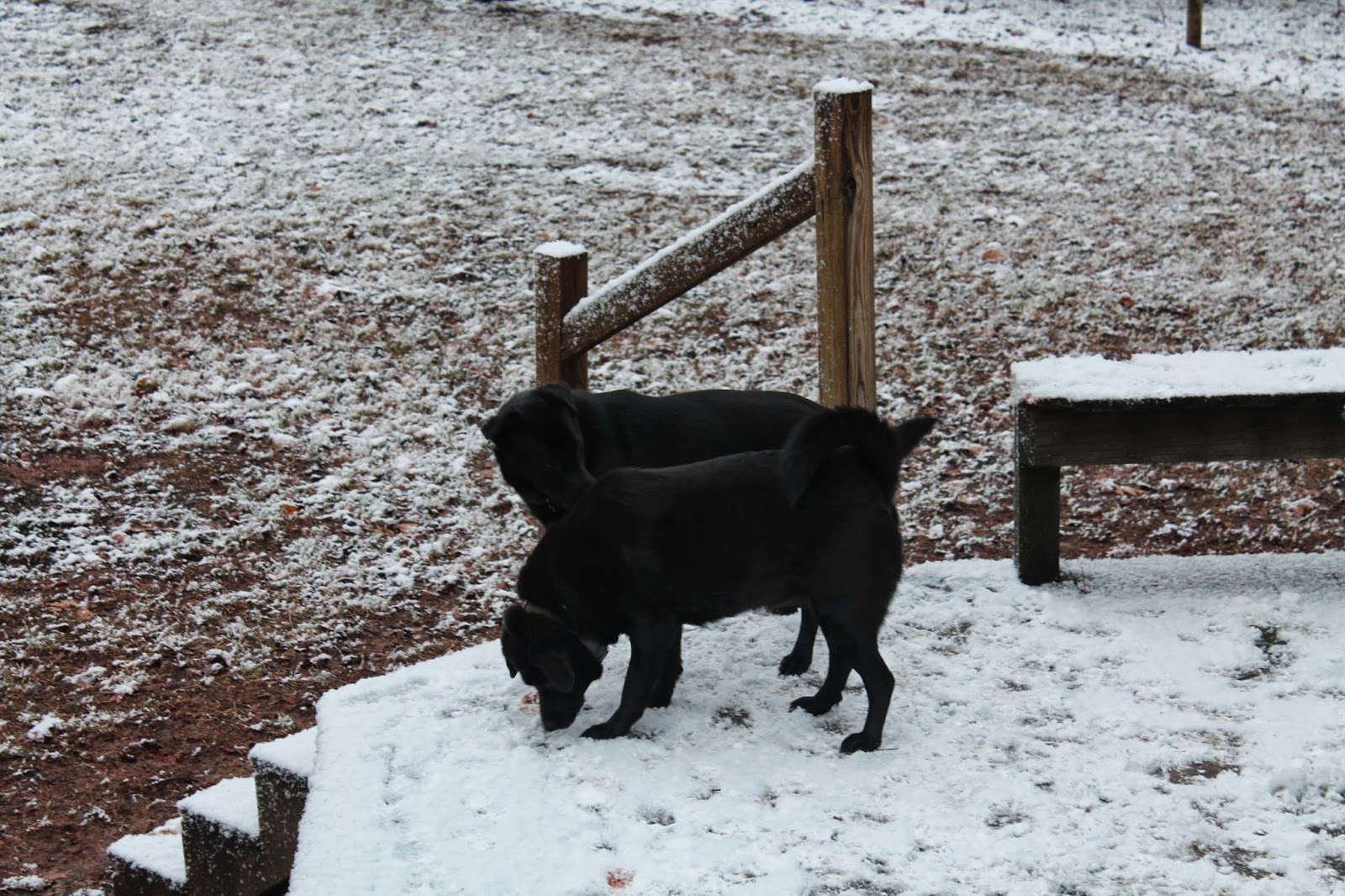 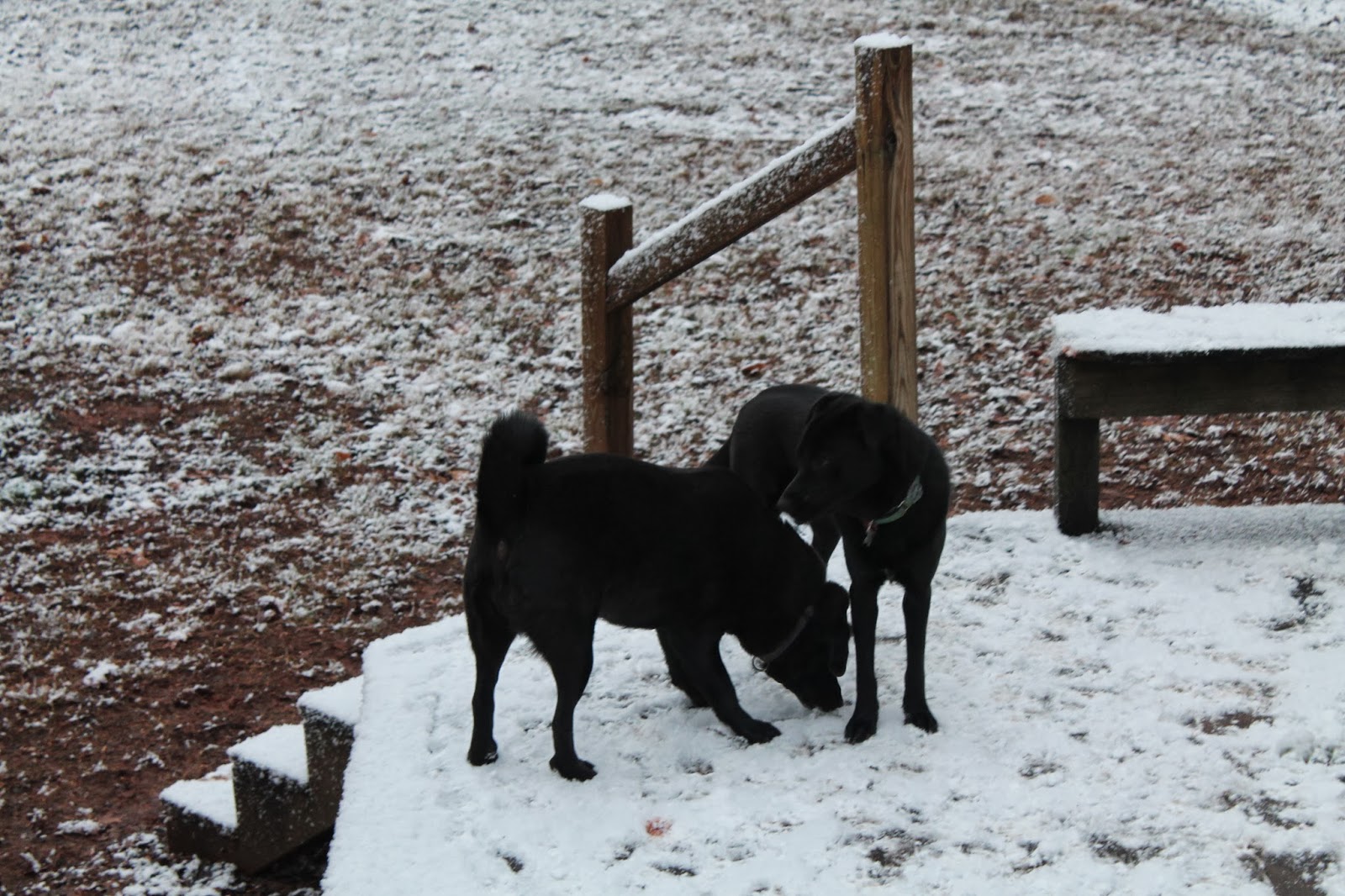 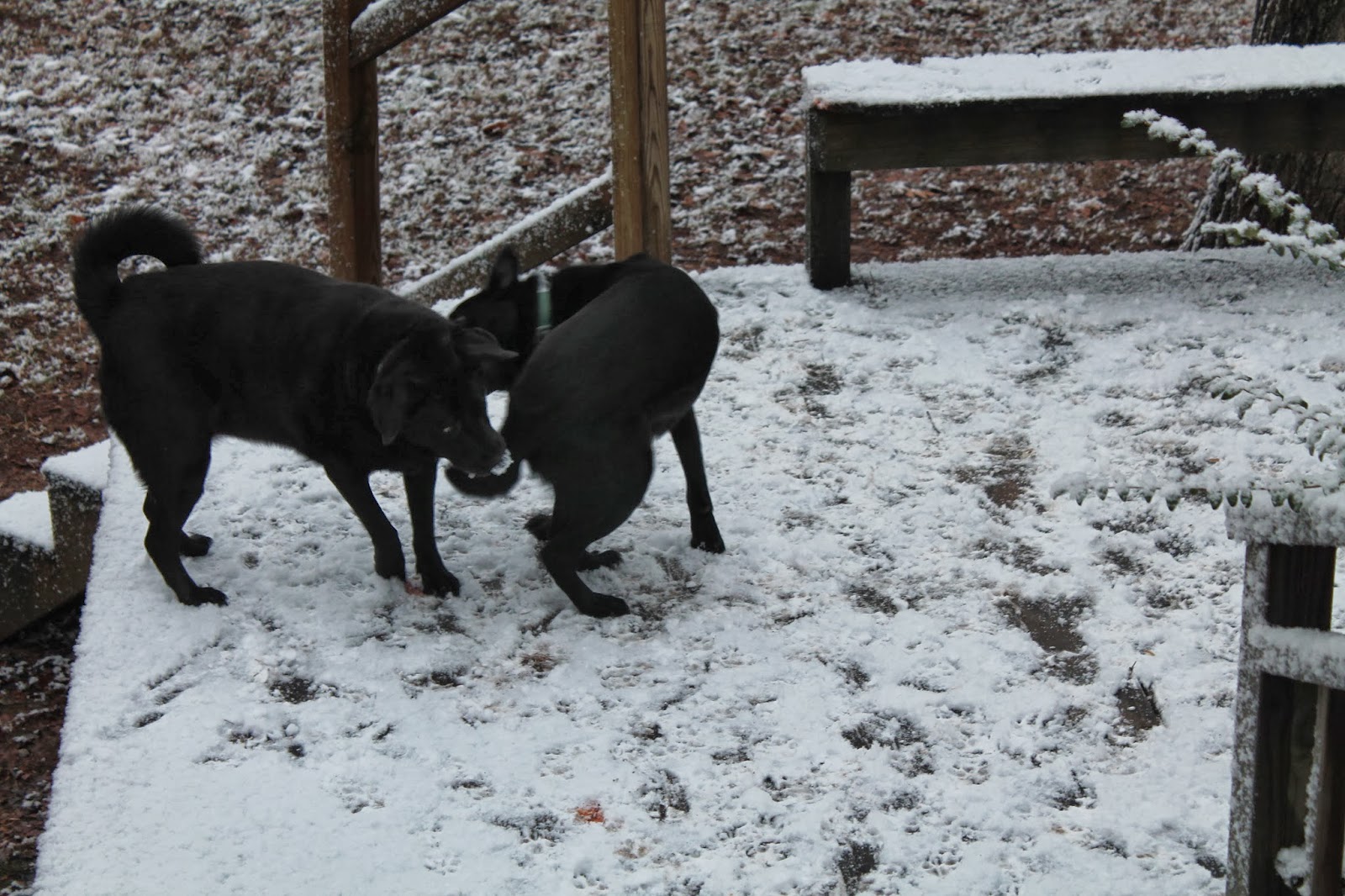 I've heated the outside a lot because of this: 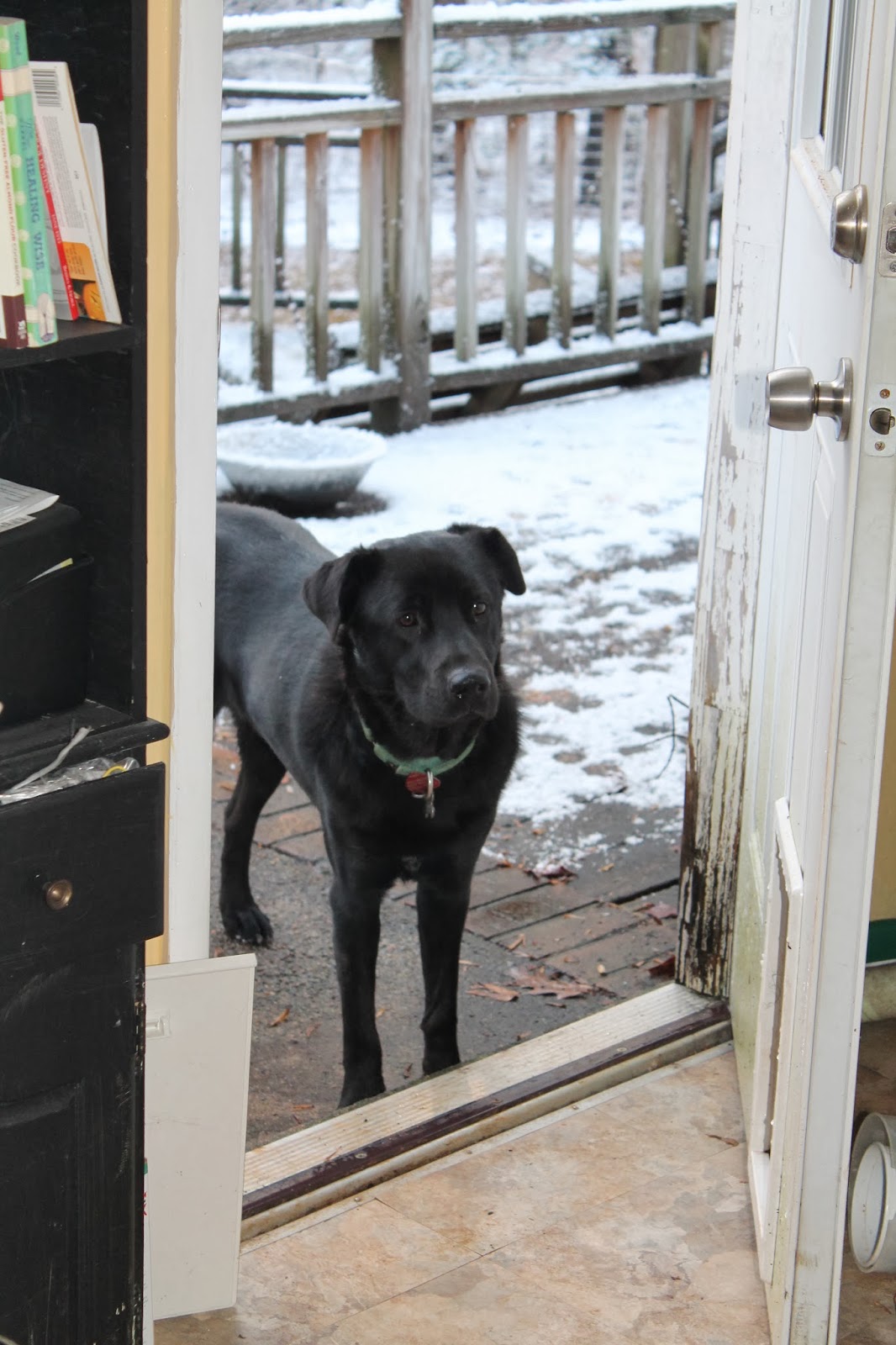 Back out on the porch: 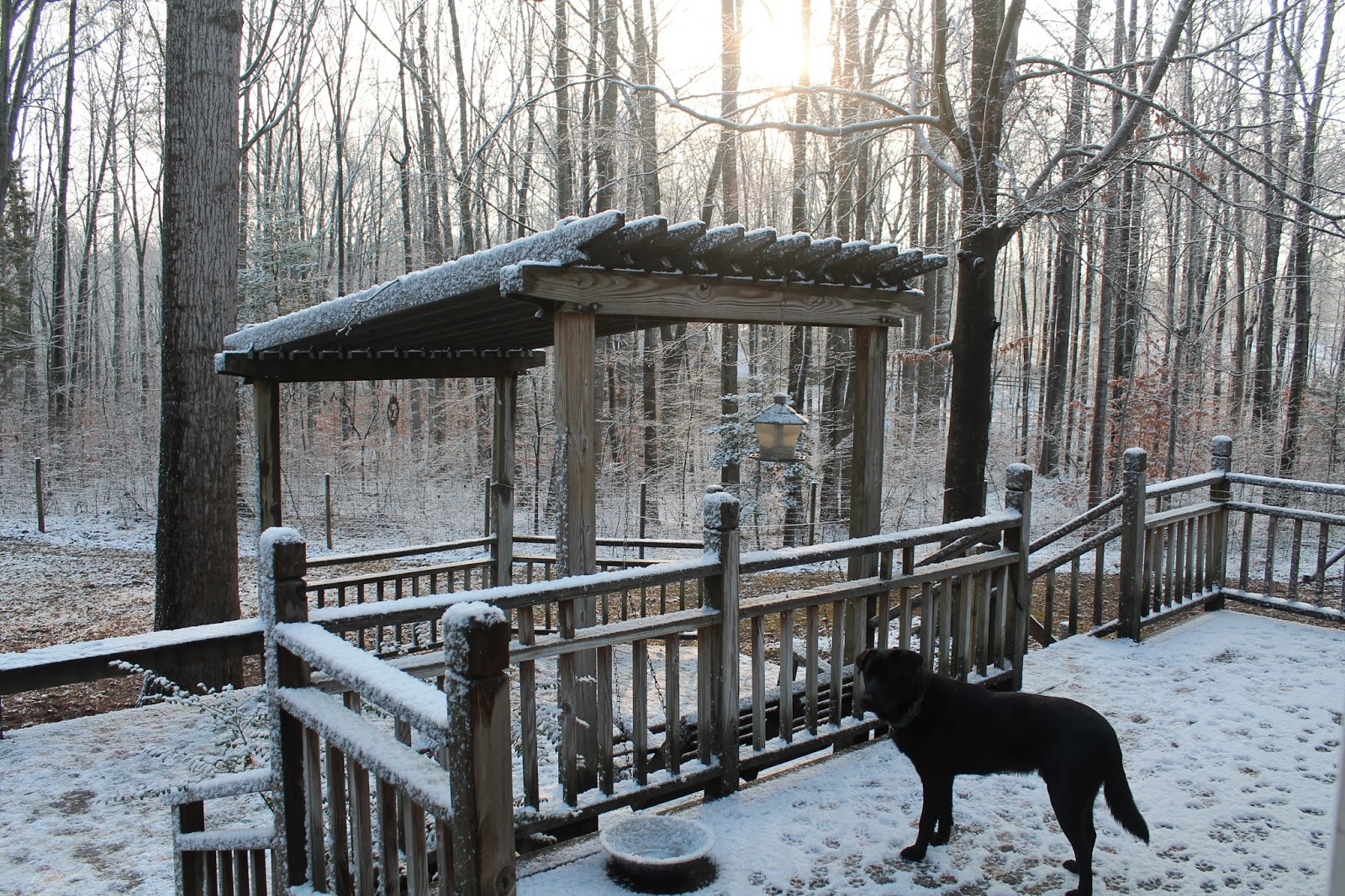 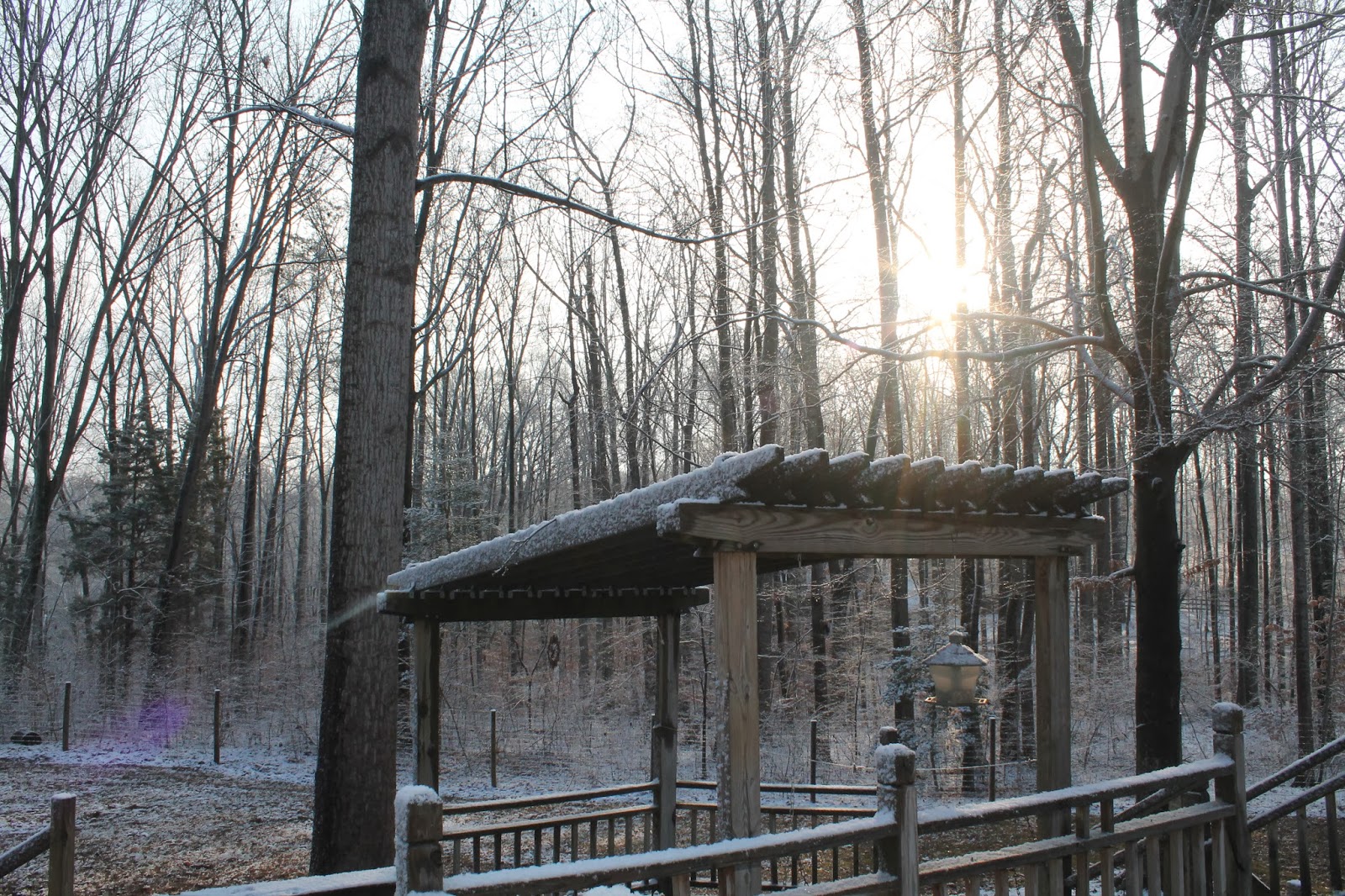 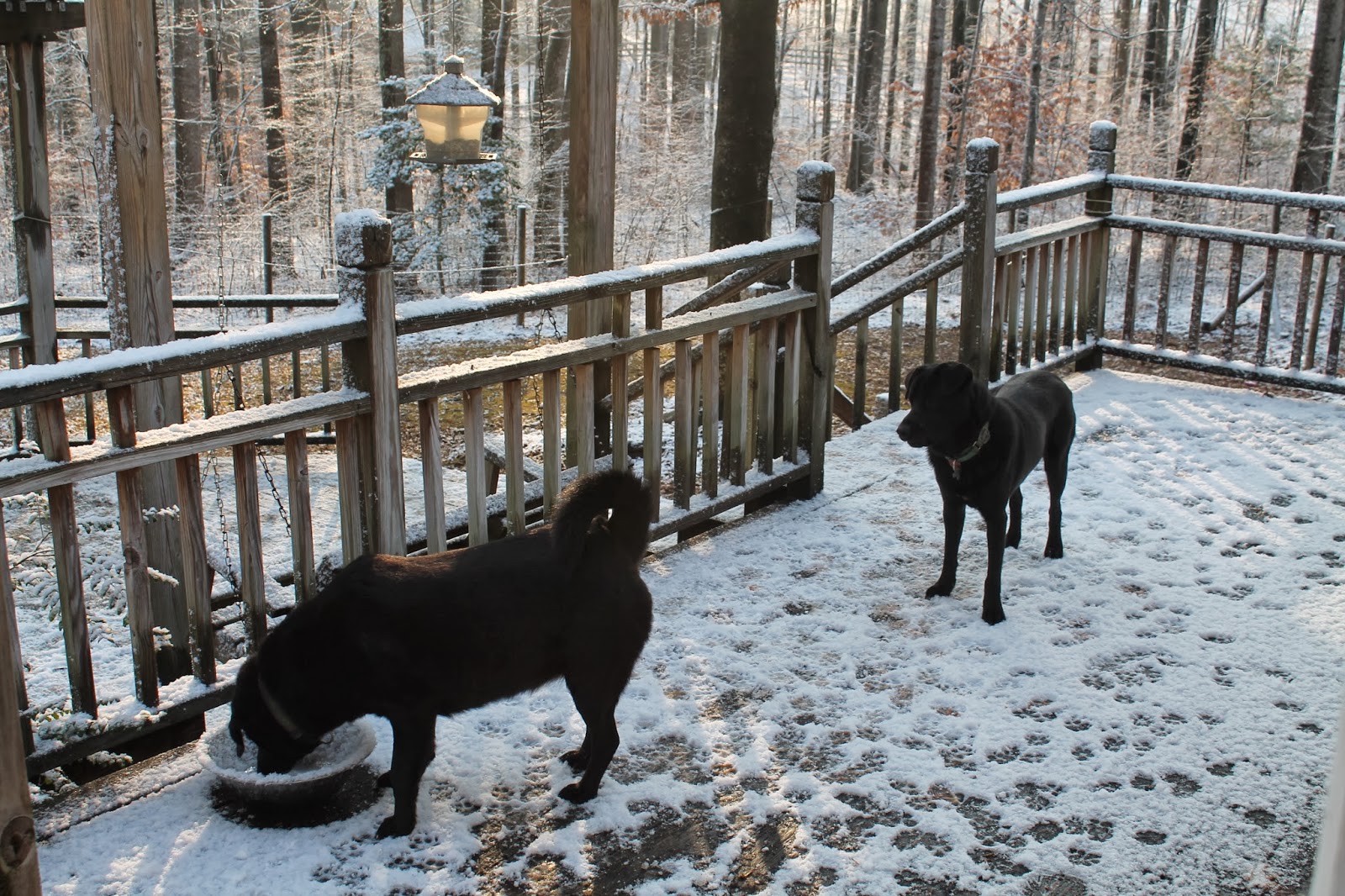 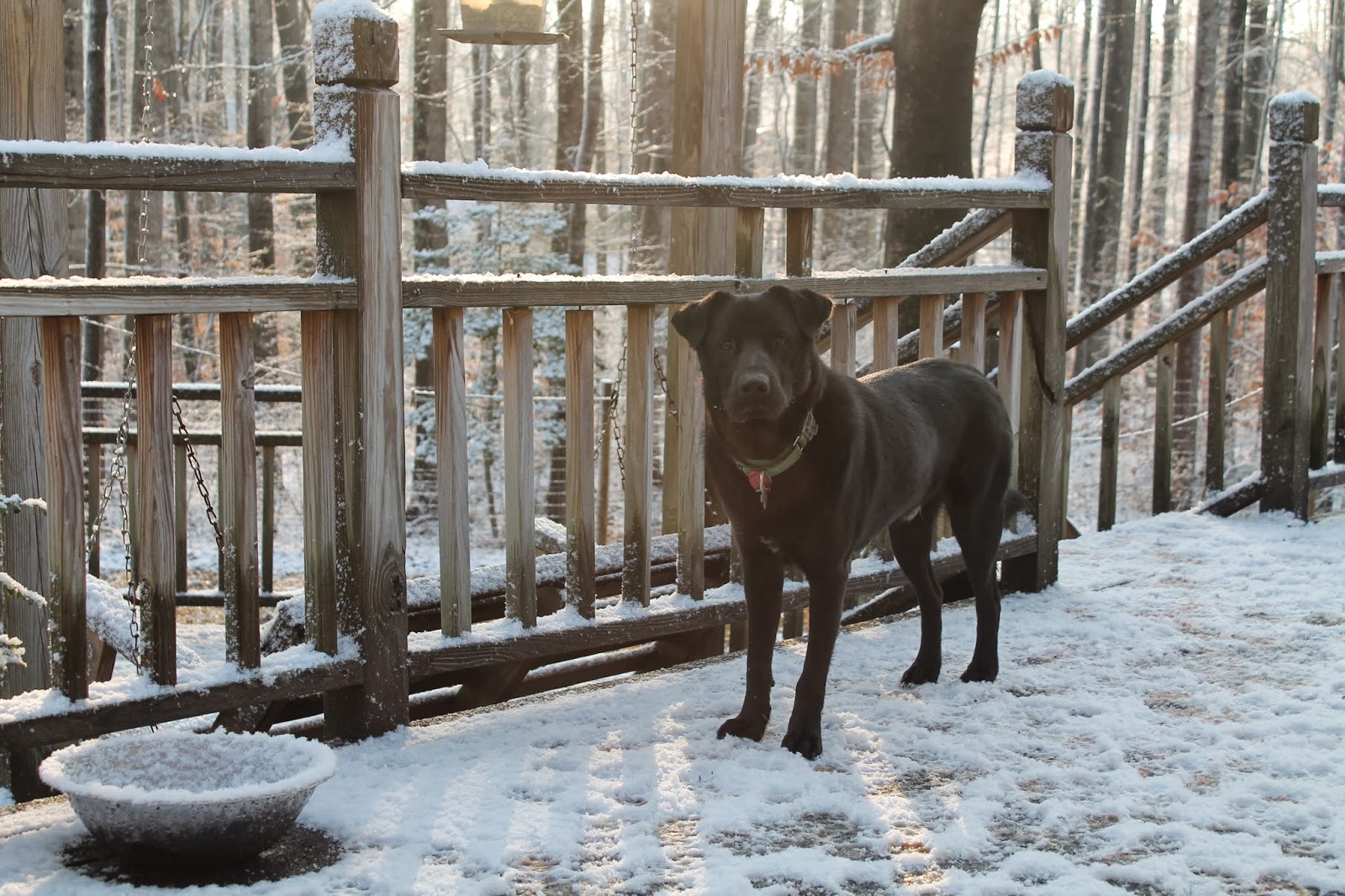 And then the snow melted as fast as it had appeared. Back in the office, all tuckered out:
While they often share the bed, here's the reason:

A couple nights ago, I called the dogs in & only Reggie came in. I called to Bingo. Nothin'. And then I'm thinking, "Did she go after a deer? How did she get out?!" It's pitch black out, and she's black & I can't see anything. So I grab a flashlight and head down the back steps . . . and there she is!  IGNORING ME!  Eating the rest of a squirrel. I think. Hard to tell when you're looking at internal organs, but since the squirrels are always at the bird feeder, and they go after them, I'm pretty sure one of them was a bit too slow. Anyway, there she is, wanting to finish her meal before coming in for the night! Cheeky girl. Can't fault her, tho. What dog wouldn't pass up a tasty squirrel?
Now I'm thinking that Reggie may have caught the squirrel and she usurped it. But who knows? She's a bit chubby, but she's still fast. One morning I looked out to see her & Reggie chasing across the deck, down the stairs around and under the deck and then back onto the deck. Around and around. We've taken a coupla walks down to the lake, with Reggie protesting at the back gate. "Where ya goin'? I wanna come, too!"  With this in mind, I thought I'd take Bingo to check the post box. This used to be one our daily rituals pre-fence. So I got the leash and we went out the door.Leaving Reggie barking at the door. "Where ya goin'?! I wanna go! Come back!" 5 minutes later, when we got back, I opened the door and he was right there. He leaned into my leg and just stayed. I'm not sure what he was thinking; that we were going away, but he was so happy when we got back! I sat with him on the floor and pet him. "I'll never leave you. You're home. You're safe. It's OK. You don't have to worry, we're here."

Rita said to me, "Can you imagine what a different dog Reggie would be if you'd had him from a puppy?" He wouldn't have all the fear responses toward people. He's such a gentle dog. I can't dwell on what his other life was like, because I want him to know that his WV life is over and he's safe now. I'm grateful that I can provide a home for him. I could not have done this without Bingo's help, and I couldn't have taken him on if she didn't teach me first. She herself is a different dog from when I first got her. She follows me around and I look down at her on her bed and she thumps her tail at me. I really am lucky to have my animal family.  :-)

Posted by Hali Chambers at 8:54 AM