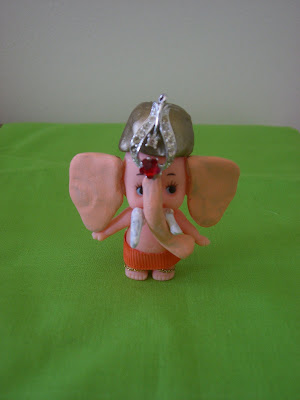 Procrastination is not laziness, it is an active process of delaying things until we "feel better" about them. It's a kind of perfectionism in the sense that we think everything has to be "just right," when in reality, there's no time like the present and we feel better when we have gotten something done. ~Lissa Coffey
I read this quote from a newsletter this a.m. and thought it was appropriate. Pictured above is the final product of Margot Potter's Kewpie Doll Challenge. She sent me the 2-inch doll in June where it sat and eventually got covered up with other thingies. So I finally excavated it. Initially I had thought I would do a miniature Seth Godin in a purple suit, since he has a bit on kewpie dolls. Then I thought, No! Robert Smith! A tiny version of Fat Bob! But whenever I would think about it, I wasn't exactly sure how I was going to get the hair right. So it stayed in my head, picture perfect. And incomplete.
Michaelangelo used to say that he was just chipping away the pieces that didn't belong to his statues. They were there already, waiting to be revealed. OMG! Am I really comparing my artistic process to Michaelangelo? Hahahaha Yes.
So I held the doll and looked at it and . . . daydreamed the possibilities of this sweet, cherubic-faced . . . reminds me of the baby Krishna pictures . . . and then I thought, Ooooh . . . Baby Ganesh. I fashioned the extra appendages with Sculpey, oven bake clay. I did make 2 extra arms, but I couldn't get them to fit. Did I mention he's only 2 inches???? I baked & then painted.
Back to procrastination: This is where I make a joke about buying a book on procrastination but never taking time to read it. Hahahaha Except that I did. And it was v. helpful. The key is just to start moving, because that helps build momentum. It's a physics principle: Things in motion tend to stay in motion. So the next thing is to finish my new CD--2 months after recording. Because, you know. *sigh* It's not perfect.
Posted by Hali Chambers at 8:59 AM

This turned out REALLY cute!

P.S. Milton Erickson, often credited as the father of modern hypnosis, lived in Phoenix and he used to give assignments to his patients to climb South Mountain. They would often come off the mountain with a new discovery or insight....