I finally got together with Ex-XM Radio Guy for our January birthdays. After Xmas, he told me that his GF, Red Lobster, gave him a rock. It's one of those special we'll-each-keep-half kind of rocks. What am I supposed to do with a rock? he says. Hahahahaha So as I was walking to the postbox one day, I saw a really cool rock. So I dolled it up, and this is what I gave Ex-XM Radio Guy for his birthday: 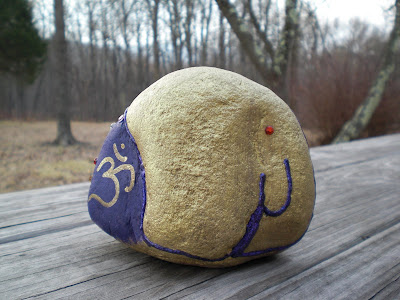 See? It's an elephant. 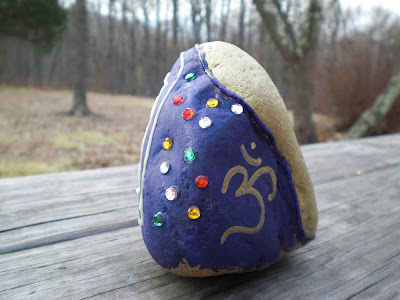 I glued little sparklies on it & used a gold pen to write OM. 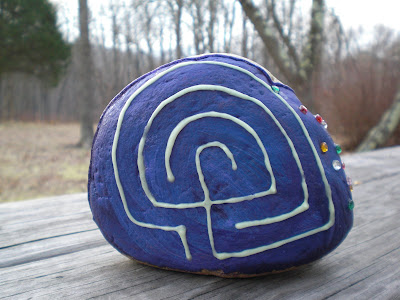 Hahahahaha
So let me s'plain. He's got a v. sweet severance package and so he's not suffering. Plus, he gets to spend time in his little-cabin-in-the-woods. After working 15-hour days for the past few years, it's been like a vacation. But his parents, of the Depression Era, are all worried about him not having a job. So that's our little joke.

So this is what he gave me:
3 CD's that he fished out of the trash at XM for me: Kathy Griffin, For Your Consideration, advanced copy of Goo Dolls Greatest Hits Vol. 2, & The Clash, Revolution Rock. See the Police Evidence bag pictured above? That's what he put the CD's in. He also gave me Walk Hard, THE funniest movie I've seen since . . . it's a fake biopic in the vein of Spinal Tap. Hysterical! Also pictured is a collection of Star Trek pez dispensers to pass on to Brother D. [I'm totally his favourite sister now!] And a pack of Old Gypsy Fortune Teller cards, circa 1940. How cool is that?
We had Indian food and then we went thrifting. At one store this cashier stood at the front and YELLED for her supervisor. KATHY! HEY, KATHY! Just then we see this woman walk-running from the back storeroom to Cashier Girl. Shhhhhh! You don't have to yell. Blah blah, use the intercom, blah blah So after she leaves, Ex-XM Radio Guy says to Cashier Girl, "How much will it take for you to yell Kathy, again? I got 5 bucks, here." Nothin'. "Anyone? $5 to yell Kathy." Hahahahaha I almost did as we were leaving . . . so that was our b-day vizzie. I have another story to tell, but I'll wait for next week . . . .
P.S. What do you think of the new blog header? It won't be up for long--just until spring. :-)

Posted by Hali Chambers at 9:44 AM