I'm picking up Mum from the airport v. late tonight. She's returning from her trip to the Dominican Republic & I'm looking FW to hearing all her adventures of pouring concrete and juggling cinder blocks. I hadn't heard from her until yesterday when I got a rather cryptic email telling me that yes, indeed she had arrived & that everything was on schedule for her flight back to the States. 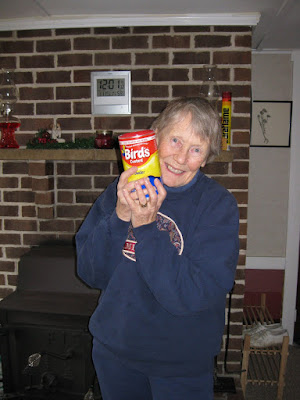 In our fam we grew up with Bird's custard--far superior to vanilla pudding! You cahn't make a PROPER trifle without it! Recently I found a resource for PG Tips, the BEST tea. British Delights also has all foods British--because you know, that's what the Brits are known for. Hahahaha So I ordered the custard as well and it came in these econo-canisters. But look what it says on the side: 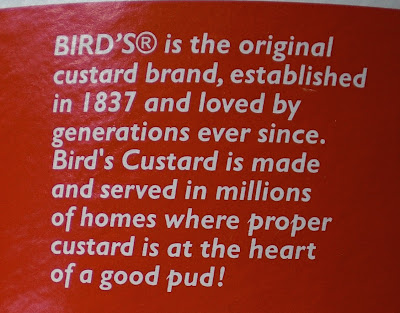 See? PROPER.
So as I was editing this post again, Mum called! She's at the Santa Domingo airport and her flight is delayed due to snow in Atlanta. She said they built a 2-bedroom house in 4 1/2 days & that she's never worked so hard in her life. If you know Mum, that is beyond superhero proportions. She said that when she sent her email, there were all these keys that she had no idea how to work on the computer. "I recognized about 10," she said. Hahahaha See you soon, Mum!

LOVE YOU
Posted by Hali Chambers at 11:51 AM