I've had a challenging week as I'm working to schedule the last of our seminars for the new year season. Yesterday was a particularly low point. I won't go into the details--nothing worse than a complaining blogger, but suffice it to say, it was a giant bowl of suckiness. So I made a big bowl of gluten free pasta and planted myself on the sofa to catch up on my DVR'd TV shows. I clicked on one, but instead got Oprah with the episode about the 200 lb. chimp that ate a woman's face off.
Well. That puts things into perspective, doesn't it? Magically, my day was looking a lot better! Yeah, it sucks--but at least I have my face!

Earlier today, I talked with chiro-sister & told her that story. And she talked about the Roger Ebert episode. Everything is perspective, isn't it? I'm taking a lot for granted. We were talking about getting older and she said this: 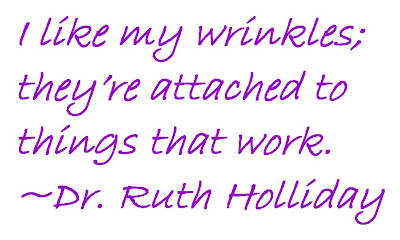 I thought it was rather quotable, so here's your quote-for-the-day. HAPPY Thursday, everyone.
Posted by Hali Chambers at 6:26 PM