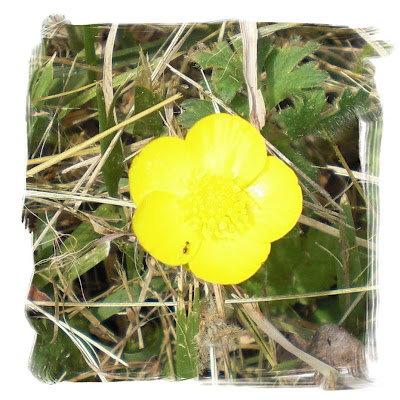 It's buttercup season and the labyrinth is sprinkled with yellow dots. This has nothing to do with anything about this post, other than I took a picture. ;-) Saturday was World Labyrinth Day. So I went out and walked before Mum came over in the afternoon. It's May already! And all those things on my To Do List have magically remained . . . undone. Well, not all. But, still... So I was walking to feel a bit more inspired, a bit more motivated, a bit more _____. I've been feeling a bit of a slug lately. And then! You know what happened?

Well. I got stung by a wasp on the medial anterior part of my left arm, distal to the elbow. Yeah, I know, right? OUCH. And I'm allergic to stings. I managed to get the wasp off my back without getting stung again. YAY, me! But there was a big welt at the sting site, my arm was swelling up, and there was a red streak going up my arm, and it was burning. All the while, I'm telling myself to stay calm. [OK, stop laughing. You know who you are!] So I took some homeopathic apis. Then I went and got my little laser that I'd gotten from Dr. Brimhall a few years ago. As soon as I shined the light on the sting site, it stopped hurting. Immediately. I thought maybe it was the apis kicking in, or perhaps a placebo effect. So I moved it off the site. It started burning again. I kept lasering and long story short, you could barely see where I'd been stung!

So after I got the pain under control, I got curious about the sting point. Have you ever heard of bee sting therapy? I went to my Resonance Repatterning Meridians book and looked up which acupuncture meridian was affected; small intestine. Then I looked up the qualities associated to it.

I have to say that after the sting & the lasering, I no longer felt like such a slug. In fact, I had an energy and a mental focus that I'd been lacking prior to it. So while I would never wish for a sting, I'm not feeling so bad about it anymore. All in all, I'd say I'm feeling as sunny as a buttercup. :-)
Posted by Hali Chambers at 6:46 AM