It's been quite the week! Mostly thunderstorms that Bingo is not a fan of. Even with her Thundershirt on and a heavy dose of Benedryl, she was shaking-shaking-shaking. She even came up with me on the bed, and I felt like I was on one of those vibrating beds. You know the kind; they show them in cheapy-type motels in the movies. Anyway, poor girl! It was so LOUD, it really did sound like God was bowling directly over us.

View of two and a half dogs:
Here's Reggie: 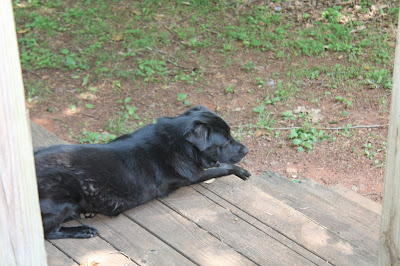 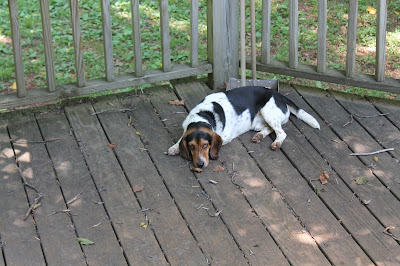 Look at Bingo's face!  It's the expression of the hoped-for morsel: 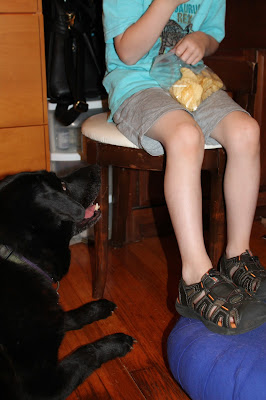 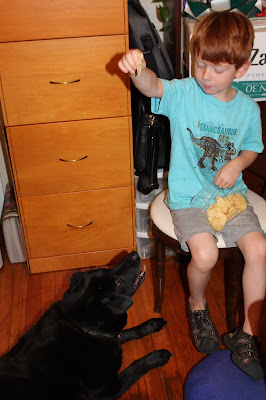 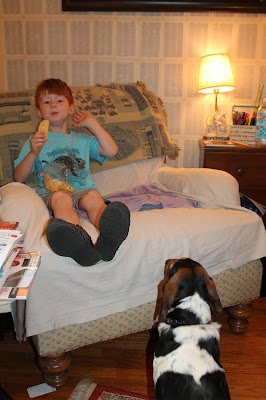 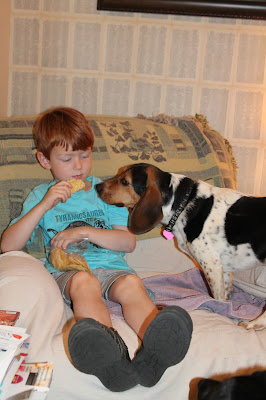 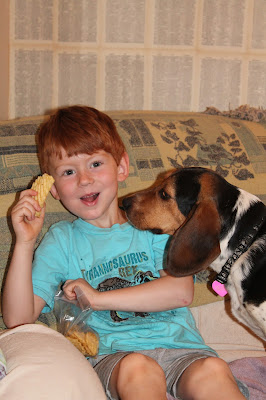 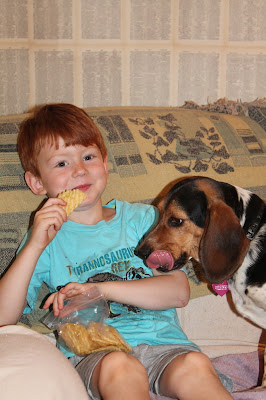 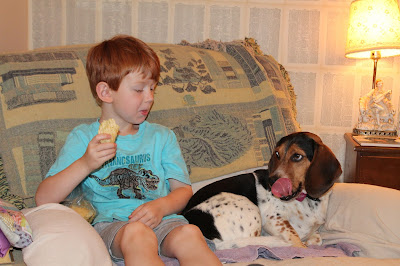 Later, Buddy on the meditation chair:
And then later on the T.U. rug:
Here's my sweet Bingo-dingo: 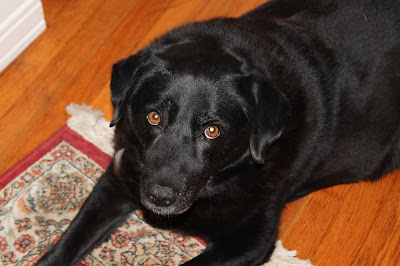 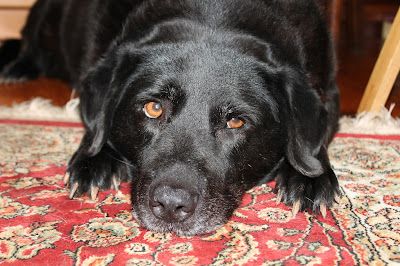 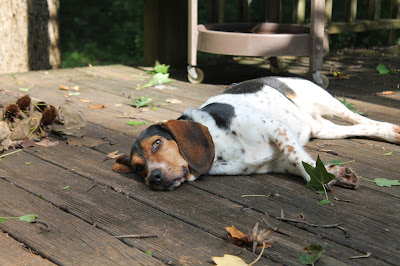 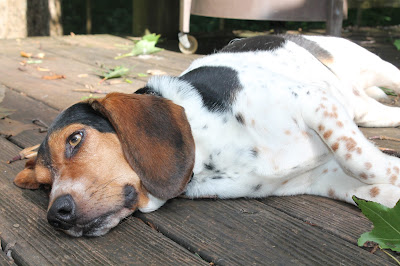 Bingo:
But Reggie wins the award for Most Shedding Dog: 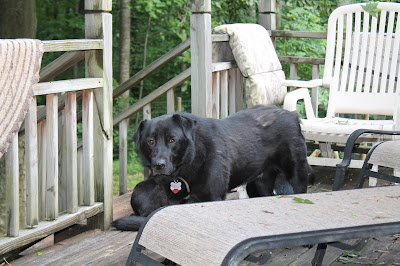 Speaking of Reggie, he likes to sit on the T.U. rug outside the office door in the hallway. I'm sitting in my meditation chair with Buddy, and Bingo is snoozing on the floor, and I hear a noise. "What's that sound?" It sounded sort of like ripping . . . so I peak around to Reggie who is pulling up and chewing the T.U. rug. "Reggie," I said reproachfully. He looks at me, head cocked to one side, a chunk of rug thread dangling from between his teeth. Silly boy! 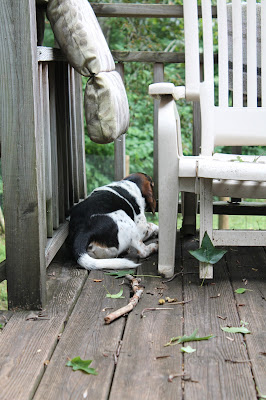 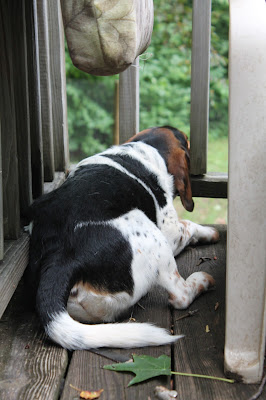 Mum saved her yogurt containers for the dogs to lick: 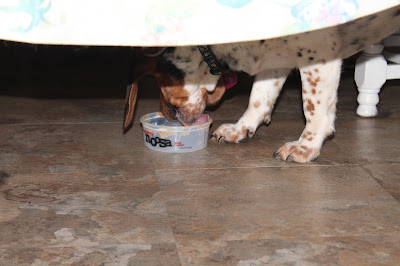 I've been putting some peanut butter in their Kongs during the storm to distract Bingo. But thought I'd mix it up with yogurt containers: 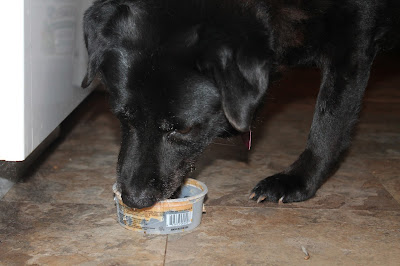 He hates being brushed, but we'll have another session today:
Reggie likes to lick my feet. If they are dangling off the bed when I'm sleeping, he'll come and lick them in the morning. He'll do the same thing when I'm in my meditation chair or on the sofa watching TV. He's a foot licker. But sometimes he'll lick my knees if they're exposed, or elbows. Funny guy.

Here's Buddy in one of his corners: 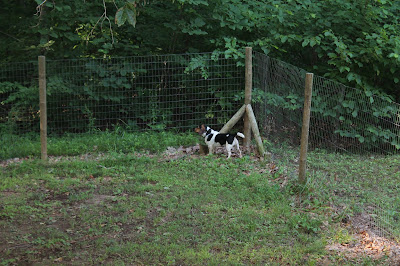 View of the labyrinth: 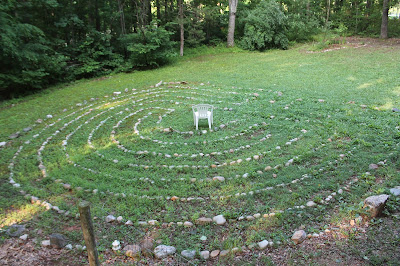 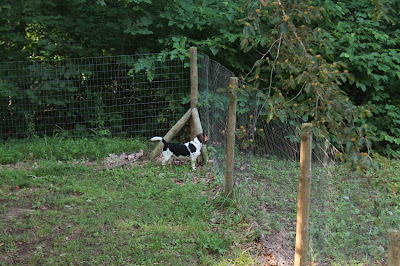 This week I discovered that beagles will not eat just anything. I had some left over pappadan (lentil wafers) from the Indian restaurant. The dogs heard me go to the fridge, so Bingo and Buddy trot in and Reggie goes to his crate, to wait for a treat. Ha! So I broke off a little piece and held it out to Buddy.  *sniff-sniff*  And then he takes it delicately between his teeth. And then drops it. "Nope. I know it's human food, but I'm not eating it."  Hahahaha  So I tossed it to Bingo who ate it before she could taste it. And then gave Reggie a piece, too.

Last week I was taking a nap. I always listen to Dave Dobson's The Beach Walk to go to sleep. I turned on the CD and lay down on the bed. Buddy was trotting down the hallway past the bedroom door and I watched him stop and listen. And then he did a U-turn and came in, climbed up the beagle/cat steps and curled up with me. He knows Dave's voice and when it's time for sleep! So CUTE!   :-)   HAPPY Monday!

Posted by Hali Chambers at 8:34 AM