'member my snow pix from a coupla weeks ago? That was just a practice run. This. This is the real thing! It's that steady, dry, whispy-powdery snow. At this writing, I think we have about a foot. We were supposed to do our family Xmas today, but of course no one's going anywhere. Mum called me on Thursday to say we were getting a snow storm this weekend. I don't like to use weather as an excuse not to do something. "How bad?" I asked. She said, "Well, it's coming from the south, and snow is always the worst when it's coming from the south." I don't know how she knows this or even if it's true. I said, "Yeah. Stupid confederate snowflakes!"

The weather channel is calling the snowstorm the "Winter Wallop." Of course, I'm calling it:

Here's the view off the front porch: 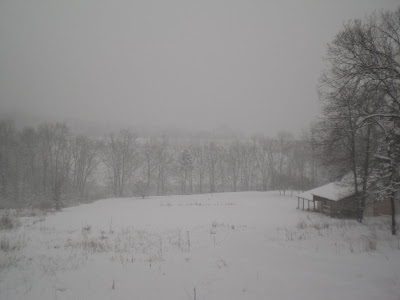 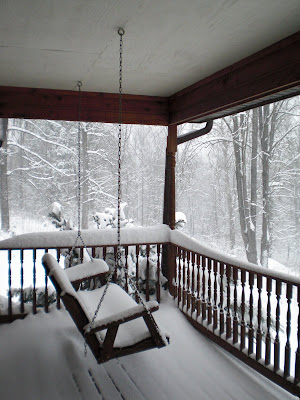 I was on my way to the river to take a few pix, but the flash goes off so that I've got snowflake orbs in my photo: 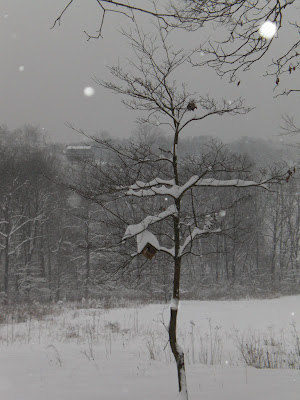 Years ago, I went to an Ansel Adams exhibit. It was one of those sticky-hot summer days. I walked into the exhibit and there was a giant triptych of snow in the woods. The visual frostiness took my breath away! So I want to get Ansel-ish by-the-river photos.

The last snow I remember like this was when Remi was a puppy. We were coming back home from the bay house and the last mile to our house was snowed in with snow drifts up to eight feet. We followed a fence line along the road and each step I would sink down to my hip. Barkley led the way, followed by my husband, then Remi & me. I still remember Remi's snowy-frosty nose. Every so often, he would trot back to me to make sure I was keeping up with the pack! He used to love the snow. :-)


And here's someone else who loves the snow: 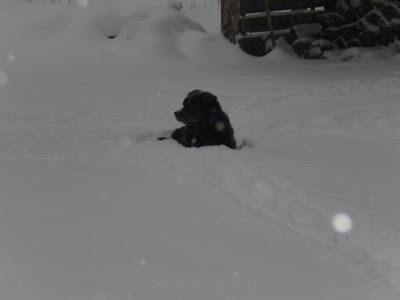 Maggie plops down this a.m.

Right now we are all cozy in the living room, listening to 40's music. The girls are having their mid-morning nap, and I have a veggie soup simmering on the stove. Here's to Confederate Snowstorm 2009!
Posted by Hali Chambers at 9:31 AM