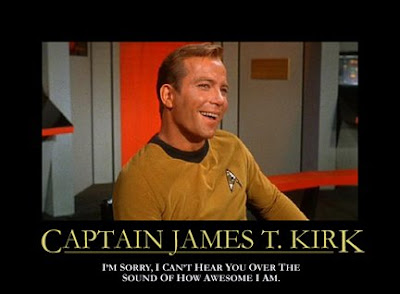 From Star Trek Inspirational Posters. Go see.
I went to the new Star Trek movie last night. Wow. I can see why they're already talking franchise. It was fantabulously AWESOME. Really. AND you don't really even have to be a Star Trek fan to appreciate it. Altho, if you are, then it makes it doubley funner. You'll get all the inside jokes as you identify who's who when they first appear on the screen.

It's the story of Captain K. & the Gang as they're just finishing up Starfleet Academy. It was so cute last night in the movie theatre. There were a few families there and there was a point in the movie when Spock does the signature "Live long and prosper" hand gesture, and through the audience, you could see various hands up in the familiar V. BTW, that is how Brother D's kids all say good-bye to my brother. "Bye, Daddy! Live long and prosper!" Hand-in-V. Ah, milestones.

Go see the new Star Trek movie and may the force be with you.

Hahahaha Whenever he used to cross-reference Star Trek/Wars on his radio show, he'd get the indignant emails from all the geeks. Why is he giving away Star Trek pez dispensers on a Star Wars Anniversary show? Doesn't he know the difference? Why don't they check their facts before they allow this to go on the air? Hahahahaha Seriously, go see the movie. And of course, LIVE LONG AND PROSPER.
Posted by Hali Chambers at 8:27 AM