Last Sunday, I had a bit of a scare with Maggie. I had ordered her Deramaxx from PetMeds, but they didn't come. Living out in the wilderness, the longest they ever took was 5 days. I ordered on Oct. 22nd, I got them Nov. 5th. The tracking said they arrived at the Richmond P.O. on the 26th--and there they apparently stayed! In the meantime, I'd made another order of a glucosamine supplement after that which came in 2 days! So, long story short (too late), Maggie went 2 days without Deramaxx on a rainy weekend and had a rough time of it. Her hind legs were so stiff and she couldn't walk. So I went to Brother Atlasta's & SIL gave me some of their dog's arthritis medication. Then I called chiro-sister and she came over to adjust Maggie.

We managed to get Maggie outside with some support but she still couldn't walk by herself. I was sort of expecting a chiropractic miracle, but alas! Not to be. So then we got her back inside and settled back onto her bed in the kitchen. Then I went over to Brother Atlasta's and when I came back, Maggie was in her usual spot in the living room when she's waiting for me to come home. She could walk again!  So I turned on the TV &  then went to the kitchen & when I came back, she had moved again to her spot where she get's massaged when I watch TV.

I called Claws & Paws first thing on Monday morning & took her in. SIL came over & helped me get Maggie up the ramp & into the car. The visit lasted a while. Dr. Morgan was wonderful & said the combination of no Deramaxx & a rainy weekend put her in a lot of pain. She gave Maggie a Deramaxx & started her on Tramadol, another pain med. I had to laugh because she put a tramadol on top of a tongue depressor of baby food & held it out for her to eat. Haha  I said, "She can see that. She won't eat it." So then she pushed it down into the food & Maggie licked the glob off the depressor. And spat out the pill. Pleh. So Dr. Morgan said, "We'll have to do this the old fashioned way," & got it into Maggie's mouth & didn't let go until she swallowed.  She had asked me about Maggie's goopy eyes. I've been rinsing them out for months & applying an eye ointment due to a blocked tear duct. However, she said, "I'm going to give you some Cyclosporine; it looks like an infection." One application that night, and the next morning I wasn't having to rinse out her eyes. Haven't had to since.

She's lost a bit a weight since Millie died. She lost interest in her food, so I've been crock potting chicken & veggies, beef, etc. & mixing it in with Taste of the Wild, a new brand. She's eating better now. The vet did an I.V. of fluids subcutaneously, so she sorta looked like a camel. She also got a pedicure.

Here she is the following day, after the vet vizzie. 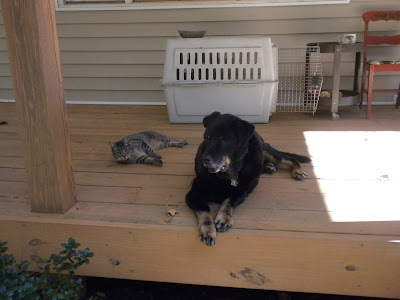 I've been using the portable ramp since the move. It's only 2 steps. Except. Maggie doesn't like to go down it, so I have to sort of carry-guide her along. Saturday I pulled a rib out & sprained my back, according to chiro-sister. So she adjusted me, percussed, & iced it. It's about 80% better today & I was able to help Brother Atlasta build a permanent ramp.


Brother Atlasta estimated it'd take us 1-2 hours. Or 6. I got to use a nail gun for the first time. He said I could tell people that my brother says I'm good at screwing. Haha 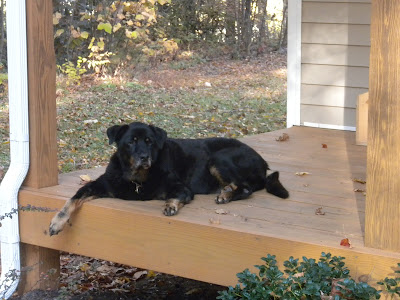 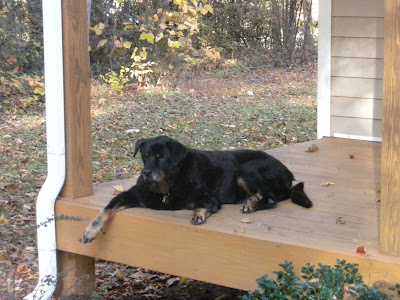 Well. I should've taken a pic of the finished ramp. But Maggie did go down it with some coaxing. So it's going to work just fine. THANKS to my brother.  :-)  And that was our exciting week. Maggie is doing MUCH better. It was about a year ago that she had vertigo & I thought I was going to lose her. And now she's bounced back. I will NEVER risk running out of her meds again!
Posted by Hali Chambers at 1:27 AM