Here she is from another angle: 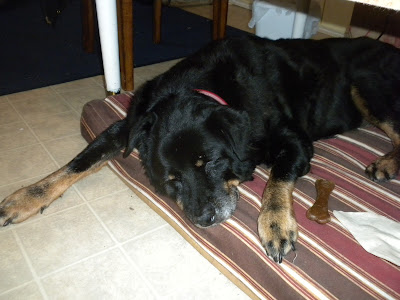 There are some things that happen that I don't capture on camera because if I interrupt them to take a picture, they are lost. One was watching Tabby Bobcat grooming Maggie. She was licking all around her head. It was so sweet. Another was when I came home from the gym and Maggie was in the LR thumping her tail hello to me. I was petting her and then in comes Tabby, and Maggie looks over at her and starts thumping her tail at Tabby. So sweet. She still gets snarly if Tabby goes near her food bowl, but I don't think that will ever change!

Yesterday was so GORGEOUS, I left the front door open and Maggie spent a large portion of the day on the front porch, going in & out. At one point, she was nestled into a pile of leaves and Tabby went and pounced on her tail! So funny!

She's sleeping thru the night most nights; altho I've had a few midnight / 2 AM feed me Bark Fests. I was really annoyed and then thought that I should stop being annoyed because at least she's here with me and she's eating. I'll have to take her for another vet vizzie, but she continues to improve. So that was our week. Not terribly eventful, which is fine with me!
Posted by Hali Chambers at 1:27 AM