Did I get into to Ellen?

No ticket, not even a stand-by ticket. But I went to Warner Bros. with the intention of getting in: 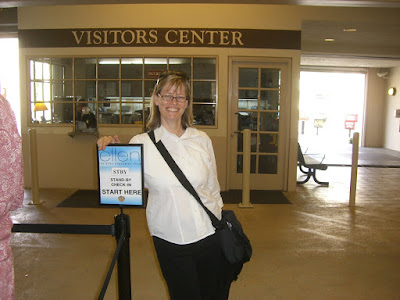 Standing by...
Danny, the Gate Keeper said that I wouldn't be able to get into the show, but he'd see if he could get me into the Riff Raff Room. I said, "That's great! Then at least I can buy some Ellen underwear!" There were these 3 AWESOME gals who overheard my story (cuz you know, I was all yackity-yack) and they had an extra ticket. I went back to Gate Keeper Danny and he said as nice as that was, he'd have to offer it to a standby person. OK, Riff Raff Room here I come! 10 minutes later . . . 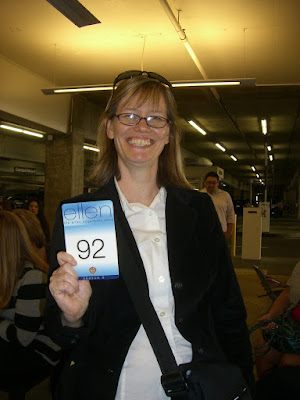 YAY, meeeeee!!!!
Because I was just one person & everyone else was with someone else, YES, I got in!!! 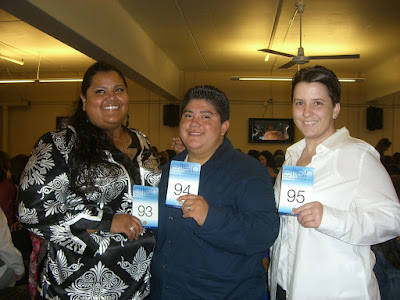 3 AWESOME Chicas: Aida, Stephanie, & Jennifer
The show featured Hugh Laurie & airs next Tues. I sat in the middle, toward the back, right across from Ellen. As I was sitting there, part of me was thinking, I can't believe I'm here. AND the other part was thinking, It's just as I saw it.

ICING-ON-THE-ICING:
Ellen invited everyone in the audience & Riff Raff Room BACK for one of her 12 Days of Christmas shows. I'll be back on Dec. 4th. THANKS to my new friends & Gate Keeper Danny & Ellen for a FANTASTIC show!!!

P.S. I'll be heading to NYC to see THE Doug O'Brien for his Down the Rabbit Hole seminar, AND I get to see Jerry Stocking, too! Back to the wilderness next week, where I will settle in for a coupla weeks and blog everyday again. I want to give a full report on Loral because WOW WOW WOW is all I can say!!!

Let me just add my
WOW WOW WOW
to yours.

So much good stuff here, I hardly know where to begin. So I'll end.