You may recall from Tuesday's post that I was headed to the Goo Goo Dolls concert with chiro-sister & friend Tereasa. As Tereasa & I were walking to the theatre, the tour bus was parked there. I said, "Quick, Tereasa! Go pretend you're going in & I'll snap your picture!" But she wouldn't. So I did:

This was the best of 2 tries with my camera. 1988 Hali would have been on the bus. 2010 Hali took a nap, ate some DSF, and drank 3 cups of PG Tips to stay awake for the concert!
Tereasa managed to be one of 15 picked for the GGD meet 'n' greet. AWESOME! And perfect for her 40th b-day. She took a little gift bag with good-for-you chocolate & I gave her some Virtual Massage CD's to give them. All right, let's get comfortable . . . . 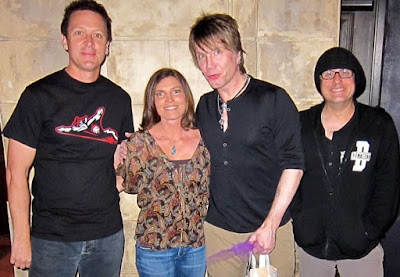 Tereasa with the boys. :-)
On the way to the concert, Tereasa was telling me about the annoying couple at 2 of the other GGD concerts she's been to. "This HUGE guy was right in front & I couldn't see, etc. etc." Well. Guess who was there? HUGE Guy right in front who would periodically leave & come back with more drinks for his drunken tribe. There was this cute little group of girls near him & when he left they would shift over. All 6 of them.

All a part of the concert experience; I'm still amazed that I escaped without a beer bath! This is one of several photos where I took a photo and HUGE Guy's arm would block my shot. There's Johnny's guitar poking out at the mid-region of HUGE Guy's flabby tricep.

HUGE Guy's arm also made guest appearances in my videos.
The opening band was apparently a v. popular boy-band. Before the concert I was reading the band name on the drum kit. Rocket Swimmer? Is that a euphemism for something? But no, I was misreading it. They were called Rocket Summer.

Is that a euphemism for something?

Anyway, they were very cute & the lead singer reminded me of Bono in his early days. No white flag to march around, but he was very hands-on with the audience & there were a few people singing along to the songs. They were prolly thinking, "Yeah! We're going to see Rocket Summer but they're opening for some band. I dunno--the Goo Goo Something-or-other." ;-) And then!
The GGD took the stage.

Chiro-sister & I wore our Tereasa B-day T-shirts. At the start of the concert, I pointed to my T-shirt & Johnny squinted & read: "Happy Birthday Tereasa." This was the moment to have my video running--but no! I missed it! I did get the rest of what he said, which was: "You know who else's birthday it is today? That's right, Hitler."

The whole night people were telling me & chiro-sister, "Happy birthday, Tereasa." Hahahahaha After the third one, I stopped explaining that I wasn't Tereasa. ;-)

Look! Those heads are sprouting a bass player (Robbie)
They played all my favourite songs and-and-and! It was just an AWESOME concert. Worth the drunk people and the sticky floor and all of it.
I'll leave you with a few shots of Johnny: (You're welcome)
Loved the gauzy back drop!


Let love in.
UPDATE: Someone else got the Happy Birthday Tereasa Moment! Click HERE. YAY!!! "You know whose birthday it is? Yours." Hahahahaha
Posted by Hali Chambers at 3:11 PM