I've been working on a new blog for the Mims. It will be a collaborative effort with the wonderful gals I work with & focus on massage and spa thingies. It's not ready for the Big Reveal yet...I was just on the phone with DJ Bruce who is a big fan of my boss John Morgan because John used to be his boss when they worked together in Providence. John had an illustrious career in radio before he got into the hypno biz. Part of my job includes setting up interviews for John on the radio station morning shows. In January when we have 3 teams around the country, it requires me to do a bit of Time Zone math (YIKES!), and John can be on the phone for 3 hours across 3 time zones. Anyway, it's nice when I meet radio people who know John because then they're excited to talk with him. A token 5 minutes becomes, "I'll try to keep the interview to 20." And no matter who I'm talking to, they all say the same thing: He tells the best stories. Yes, he does.
And then we swap a few favourites... 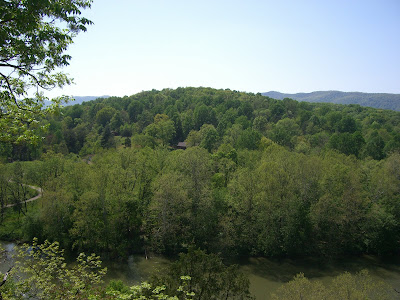 DJ Bruce asked how close I was to John. I told him we gab on the phone everyday, but that I'm in VA & he's in RI. I didn't go into more detail than that (really, who's heard of LOO-ray?), but here's a shot of my house. Right there. In the middle. Of nowhere. :-) H.
Posted by Hali Chambers at 9:25 AM