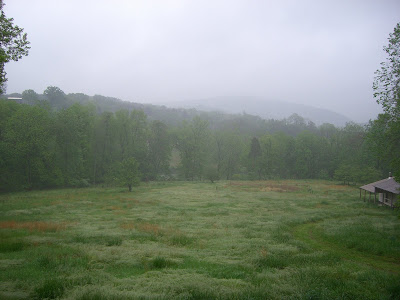 View off my front porch. Still raining.
Two of my favourite people are on XM today:
The first is CELEBRATED cell biologist, Bruce Lipton. He's talking to Bob Greene, Oprah's trainer. O.M.G. So I just realized I've had another Blonde Moment with the Time Zone Math. *sigh* He's on at 11 a.m. PST = 2 p.m. EST, right? Yikes & duh. OK, check out Bruce Lipton...and tell Oprah you want him on her show...now, moving on...
The second person is XM Radio Guy, Bill Hutton. Here's what it says on the XM site about him:
Bill Hutton, Program Director
Bill Hutton is the incompetent seat filler behind Lucy - XM 54. Born to a poor sharecropper in the Dust Bowl of the '30s, he learned to fake his own death for insurance money by the time he was 10. Hutton began working in radio as a way to steal records in 1967. By showing no talent whatsoever, he was immediately promoted to general manager and developed such forgetful radio gimmicks as "Thirsty Mondays," "Soiled Gym Socks For Seniors," and "Guess What I Just Swallowed." In 2001, Hutton was given a job at XM as part of a settlement with XM's parent company.
Hahahaha! But seriously, I kid. At first glance, you may think these two have nothing in common. Here is the common thread in both: they have a committment to living a life of JOY. And they are both v. funny people. If you're a fan of alternative music, and even if you're not, you can check out The Bill Hutton Show tonight on XM 54 at 9 p.m. EST.
P.S. No, really, that's the right time!
Posted by Hali Chambers at 6:59 AM