When I was in England, I saw a post from Lost Dog Rescue with a picture of Reggie: 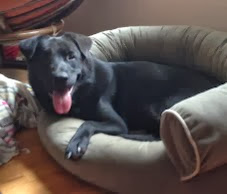 I've been on the lookout for another dog for Bingo. She's so friendly with other dogs. So I read up on him & he looked like he'd be a good match:

Reggie is a handsome boy who came to us shy and scared from West Virginia. Since then Reggie has blossomed into a silly sweetheart, who greets you with tail wags so big that his whole butt shakes with his happy tail. Reggie is still very shy with strangers, but he warms up quickly with a gentle approach and some extra treats. Give him some time to settle in and he will be licking your fingers and cuddling on the couch. Reggie LOVES other dogs! He is looking for a home with another dog to be his best friend and tour guide. He is also good with kitties so he can be everyone’s buddy. Reggie loves being outdoors and is very athletic. He enjoys running around in the yard with his pals and has an expert sniffer for finding chipmunks. He would be an excellent hiking or running buddy if you like to hit the trails. Indoors, Reggie likes to chew on his antlers, play with his squeaky toys, and snooze on big fluffy dog beds. Reggie is already housetrained and crate-trained. He LOVES treats so he learns quickly and has been a joy to train. Reggie may take a little more effort to get to know, but he is worth every bit of it. Don’t miss out on this special sweetheart! 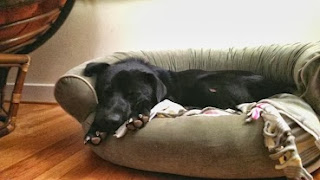 Well.  I drove to Fairfax & went to the adoption at Petsmart & I got him today. More to come, but he is settling in nicely.
Posted by Hali Chambers at 9:29 PM