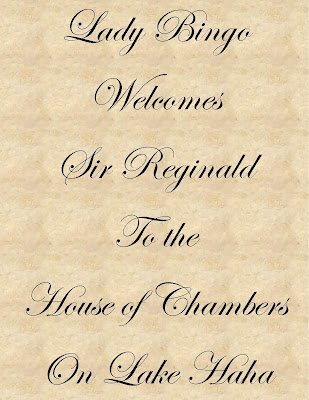 
I had to go to the official Lost Dog Rescue adoption event at Petsmart in Fairfax. Mum was all: "You went where? You had to fill out an application? They interviewed you? Don't these people know who you are?"

Yes, Mum. I'm nobody. And I'm glad for the sake of the animals that there are hoops to jump thru. "Free, to good owner" pets end up in the shelter. Or worse. They're weeding out potential problems. Especially for a dog like Reggie.

I hung out with Reggie & Will, Reggie's foster dad for an hour and then filled out an application and did an interview. I'd had an email back 'n' forth with Echo, Reggie's foster mom, so I had most of my questions answered. I knew he was coming home with me, but there was another woman there to see him as well. Also, there was this suspicious-to-me Russian couple who pointed to Reggie and said, "We'll take that one." They'd not spent any time with him or asked any questions. Thankfully, Will said something like, "He's already been adopted."  Da.

It took 3 hours to get home. Reggie sat in the back seat, and would occasionally get up and look out the window. He's very shy, which I was expecting from his profile. I should say that he's shy with people. I stopped for gas about 10 minutes from the house. After I got back in and left the gas station, Reggie came up front with me and sat on everything in the front seat. Progress.
In with Reggie's things was a copy of Patricia McConnell's The Cautious Canine, How to Help Dogs Conquer Their Fears. A friend!


View of the lake on the way up my street: 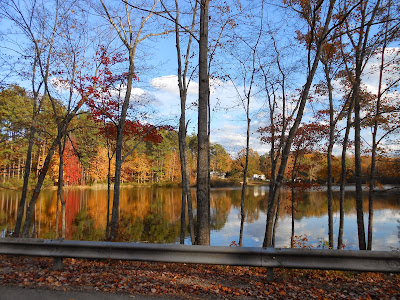 This is the usual sight when I pull into the driveway; Tabby waiting for me at the end of the side walk.

I put Reggie on the leash to walk him before going in:
Then we went 'round to the back yard: 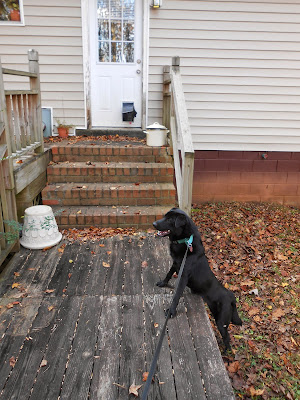 Bingo was so excited! "A friend! Can we keep him?"


In the meantime, Tabby is sitting at his feeding station:
And you know what he's thinking . . . 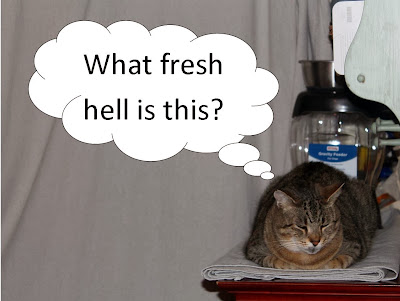 But look at this sweet face:


I'm taking Bingo & Reggie for walks separately. And sorry--no pix of Reggie walks. He's just learning the basics of the leash. I haven't had to leash train a dog since Barkley. Anyway, I took Reggie for his walk & came back in and got Bingo. He was sitting at the front door, so I took Bingo to the back. Boy, is he fast! He slipped past me and went frolicking in the back yard. He just wanted to play with Bingo! I'll be glad when the fence is finished, so I can let them out to romp and play. Anyway, I had Bingo on the leash & he's bouncing around. So I just went back in the house and left the door open. It took about 30 seconds for him to follow us back in. Sneaky boy. Disaster averted!

Monday morning I took Reggie out first. Then I got Bingo and ninja-maneuvered us out the door to leave him in the house. Well. Bingo & I are walking down the trail and I look back to see a black streak going across the back porch. OMG! Reggie-the-escape-artist can squeeze himself thru the cat door! I think he doesn't want to be left alone. He followed us right back into the house, so I'm not as worried about him running off, but yikes! I put a chair in front of the cat door so that Tabby can still get in 'n' out, but Houdini can't. Of course you can imagine what Tabby thinks of that! But to his credit, he's much nicer to Reggie than he was to Bingo when she first came. He hasn't growled or hissed. He even came to meet us on a walk and he & Reggie nose-kissed. *sigh* Friends!

Reggie was very skittish when he first got here. But he watches Bingo getting belly rubs, so I'm hoping he's getting the idea that this is how we roll. Sometimes literally. Haha

I can't make any sudden movements and I have to be particularly careful with my hands; I reached up to my face really quickly one time and he shot down the hallway away from me. All this makes me think that he had a rough beginning with people. I don't want to dwell on that. I just want him to know that he's in a safe place and he'll never have anyone raise a hand to him.

I was sitting in my office and I heard the clicky-clack of dog feet on the floor behind me. I thought it was Bingo, as usual. It was Reggie. 2 days after coming home, he put his head on my lap and nuzzled into my hand. So happy he's starting to relax. So happy he has Bingo. She's the best friend anyone, dog or human, could have.

Posted by Hali Chambers at 6:40 PM

What a peaceful and loving place for Reggie to live. Everyone's life is better because they have each other:)Love to all of you my dear friend

Thank you so much, Miss Ruthie! They have a loving place because of your love & influence so many years ago, starting with Barkley. I am forever grateful and so blessed to have you in my life, and always in my heart. Much LOVE to you! :-) H.