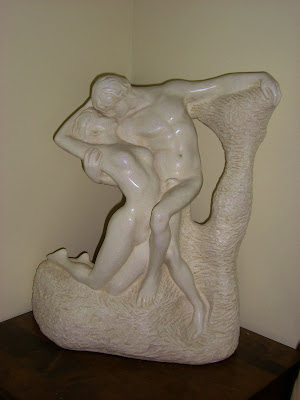 My nieces told me that this is a statue of their mommy & daddy. Hahaha

A was showing Mum her model of the planets and was explaining that Pluto is no longer considered a planet, but has been demoted to a planetoid. She's missing Uranus, which she then said was being renamed to Urectum. Hahaha That's my brother for you. The youngest niece remarked at 18 months as they were driving along, "The trees are really sneezing today." In our world, that means it's a windy day. Yesterday when Z said she needed a bandaid, I asked her if she had any Jesus bandaids. My mother laughed. "You're just like your brother!" Yeah. In last night's story, we learned that the macrocosm reflects the microcosm. Hahaha

I think about Bruce Lipton and Conscious Parenting, and Dave Dobson and honoring the Other-than-Conscious mind. There's so much going on with their little brains. It's a huge responsibility to make sure they're getting programmed with the good stuff. :-) H.
Posted by Hali Chambers at 2:05 PM