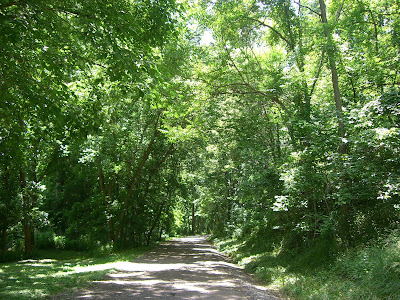 On the way to my postbox


I'm back in the wilderness after a month of being out in the world. When I first moved here a year ago, if I ventured out, I was exhausted and ready to be back at the end of the day. I kept waiting to have that feeling as I was traveling around. You know, when you just want to sleep in your own bed? But it didn't come. I slept better in my brother's bat cave guestroom than I had in a while.
And I loved spending time with my sibs & the nieces. I took my nieces out for dinner at their favourite place, Ukrops, a local grocery store. We all had sushi, except for Z, who's 4 years old. She had chicken. As we were eating, this was the conversation:
Z: Auntie Halimah, does chicken come from real chickens?
Me: Yes.
Z: Oh my God! Really?
At this point I was expecting her to say, Eeewwwww! But she said, Mmmmmmm....
Hahaha That's my brother's daughter. He told me that after they found the Ganesh statue I'd buried for their treasure hunt, that they would play the Bury-Ganesh-in-the-desert game and rebury him and rediscover him.
Anyway, back to the idea of home. If home is where the heart is, then where is my heart? Connected in nature...which is everywhere. Something to ponder....
Posted by Hali Chambers at 8:12 AM