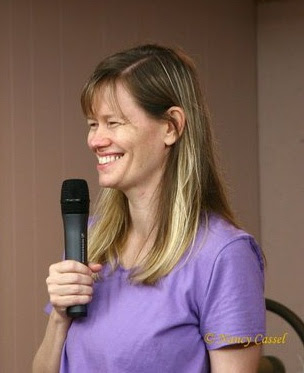 There is nothing like being in front of a group of people for you to be able to see yourself. You see yourself in every other person who is seeing you. You discover that you are independent of who you thought you were. You dive into self-exploration through the eyes of others. Any differences you find between yourself and other people is the result of something you made up, some presupposition or rule you created. You find out about yourself from other people, and about other people from yourself. ~Jerry Stocking, How to Win by Quitting

When I was going to go to Jerry's Personal Renaissance course, John Morgan told me to take the mike as often as I could. I've no problem getting in front of a group and teaching, that's my training. It's harder when I don't have any content to hide behind and it's just me. I really had no idea what to expect. I had listened to some recordings of Jerry's cluster (teleconference) calls. He's not really a sound-bite kinda guy. The first morning he would say to the group, Get it? And I would see people nodding their heads. No, I don't get it. Get what? So I sat and watched everything going on and then Jerry said something about an "Out Day." I raised my hand and asked him what an Out Day was and he pointed to the mike. I repeated the question. Why are you here? he asked me. Yikes! I'd like to recount the rest of it accurately, but I'll have to wait til I get the recordings of the seminar. Something about me being oppositional. I AM NOT!!! Oops.

The above picture was taken by my partner-for-the-course, Nancy Cassel. On the last day. I was not smiling that first day, until much later in the afternoon. But I have to say, I'm continuing to get little lightbulb moments and insights.

Posted by Hali Chambers at 9:13 AM