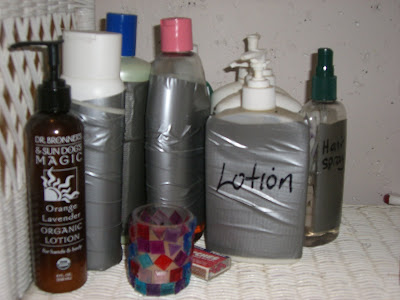 What's the deal with the duct tape? I'll get to that. Back in January, I was on the road with John Morgan. I was registering participants for the weight-loss seminar. The seminar comes with a reinforcement tape for free, but most people like to upgrade to the CD, which is an additional $10 (right now it's $5 with the summer sale). Anyway, one woman started arguing with me that the CD should be free, and who uses tapes anymore anyway, blah blah blah. So you don't want the CD now? I asked. She said, "Of course I do. But I'm going to say something to the hypnotist!" I thought, John is going to have fun with you! At the end of the seminar, she was all smiles. John said good-bye to each person at the door and as she approached, he shook her hand and said, "Mary, have you noticed that you have a few more rules than the average bear?"
We all have rules of how things should be. I had an English professor say once that the more laws we implement, the more get broken and the more criminals get created. I think with rules, often the more rules a person has, the more they set themselves up for disappointment because other people don't fit into their model of how the world should be. AND they tend to judge or worse, should on other people with their rules because "that's the way it's supposed to be." It's a patterned response that begs the question, "Says who?" And is it a useful rule? Shoulding on yourself or others is a sure recipe for creating unhappiness.
And now to the duct tape: Duct tape is for taping ducts. That's the rule. However, over the years, it has evolved into the all-purpose everything solution. I love to find examples of its creative use. That's my rule.
Posted by Hali Chambers at 9:26 AM