Last night chiro-sister Ruthie & I went to a concert. It was a tribute band to The Cure. Called The Cured. Hahahaha They play all the songs that the real band won't play anymore! So we were ready to Death Rock out (the youngsters these day call it Goth). 2 opening bands??? Hehhhhh...finally the band came on around my bed time.

Back in the day, we used to call Robert Smith "Fat Bob" because he used to play with Souixsie & the Banshees and when Souixsie was asked about his role in the band, she said, "Fat Bob plays what he's told." Here's a shot of Fake Fat Bob: Fake Simon did some really cool yoga-chi-kung-tai-chi. He held this pose for a v. long time: 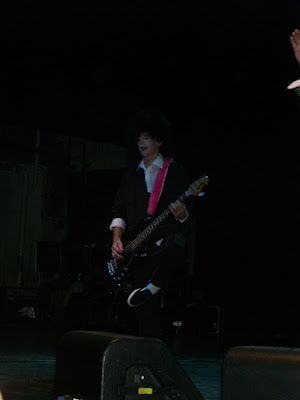 There was no version of Lol and NO keyboards???? Here's guitar guy. Chiro-sis & I agreed he has a nice set of quads. Not something we ever would have commented on 20 years ago! 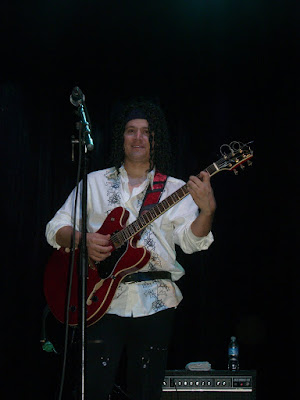 Here's what we 3 sisters looked like back in our Cure Daze: 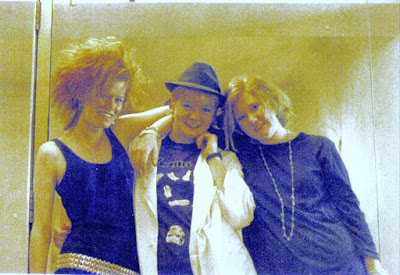 And at the concert last night: 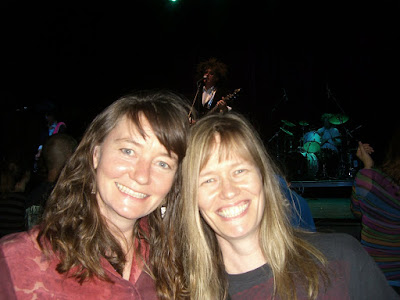 Did you bring protection? Ruth asked. Of course! We were not the only ones with ear plugs. Not even the real Fat Bob is worth hearing loss. The concert was a bit of a disappointment, not because of the band, but the sound. All bottomy bass & drums, with vocals & guitars v. faint. That was one of the things about seeing The Cure was that their sound is impeccible. The other thing is that Fake Fat Bob was way more engaging with the audience than Real Robert Smith. I'm used to being ignored. Hahahaha But there you have it. Now on to a fake U2 concert!