I'm back at the river house and so I'm slapping these photos up from the seminar. This is Dr. Tyran Mincey. I managed to capture him in his cowboy look this time! 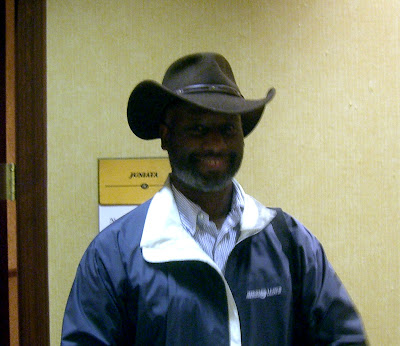 There was a whole group of doctors up along the wall doing this exercise when Dr. Mincey walked in. So he tried it. You can see a bit of the laser to the right. Without getting too technical (really, as if I could!) it speeds up the healing process. It stimulates the mitochondria (energy factories) of the cell to produce more ATP (energy) in the cell. It really is the miracle tool. Great for injuries, pain & inflammation & a bevy of other symptoms. What could your cells do more of if they had more energy? 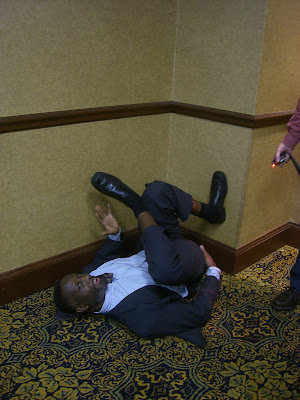 OK, on to Dr. Mincey's brother, Riley. He is one of the most positive people on the planet! When he was 2 months old, he had a botched needle procedure done on his leg and it got infected. They amputated starting at the knee and eventually they took his whole leg. They also wanted to take one of his arms. ????? Afterwards, everyone associated with the incident disappeared from the hospital. This was in 1968--can you imagine if that happened today? So this is Riley's little trick: 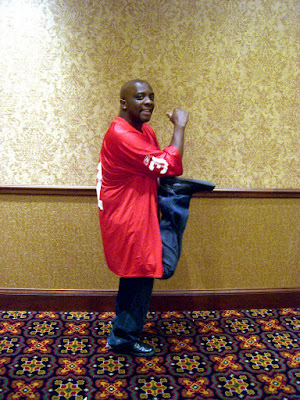 The seminar was sponsored by the Mincey Bros (Nutriwest PA) & was taught by Dr. Brett Brimhall. He's kind of a cross between his dad, (Dr. John) and Dan Murphy. The science stuff just flies off his tongue & sometime right over my head. But WOW! Awesome stuff! 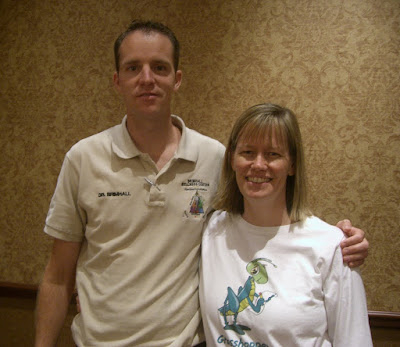 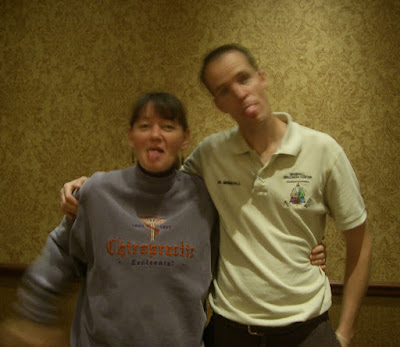 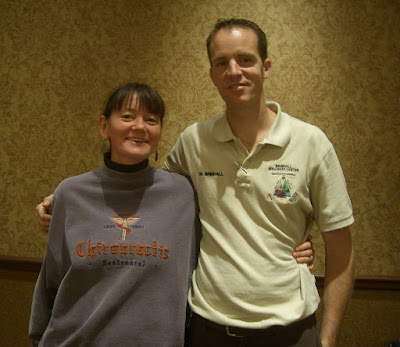 I learned a great new percussor technique from Dr. Cliffton Brady having to do with digestion and the colon. I worked on another doc there who had some shoulder pain. As I was working on him I was engulfed in a cloud of chlorine smell. He used to be a swimmer. Dr. Brady says that when you start doing percussor, you experience some pretty weird things. Yup. So it was a really great weekend--lots of learning and laughing. My favourite!

Posted by Hali Chambers at 9:13 AM

Please send me a note when you plan to attend your next Brimhall seminar -- and I'll try to attend also. I'm ready to learn more!

Don't know which one will be the next one, but will keep you posted! Possibly Homecoming in Jan. but don't hold me to it.
Namaste, :-) H.