Apologies for the lack of a Day of Rest post, yesterday. I had no internet yesterday, and then I was at the Mims doing massage. So happy Monday morning! Autumn is my favourite season--I know there are those lamenting summer's end, but I love the crispness to the air, and the BEAUTIFUL colours. My favourite trees are maple because the leaves can be multi-coloured on the same tree, and they are so vibrant. This is a tree at the Mims: 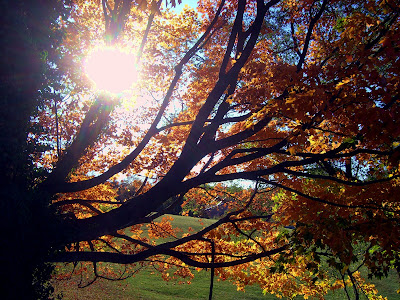 When I was taking Doug O'Brien's Ericksonian certification a few years ago, we had to create a metaphor around a problem or concern someone was having. We were in groups and one man said that he was sad because his mother was old and ill, and he was afraid. Have you ever said just the right thing at just the right moment, and your words are like a healing balm that soothes and comforts a person? This was not that. I don't remember what anyone else said, but I said, "It's kind of like a bowl of rotting fruit...." YIKES! His face crumpled and he said, "That's probably true." How do you back pedal that? I said, "No. It's not like that at all. It's like the seasons. Your mother is in autumn. Her leaves are turning and she's letting go, getting ready for winter. The tree doesn't rebel against autumn, the tree lives through its seasons." He took a breath and smiled and said, "Thank you." That is the power of metaphors. 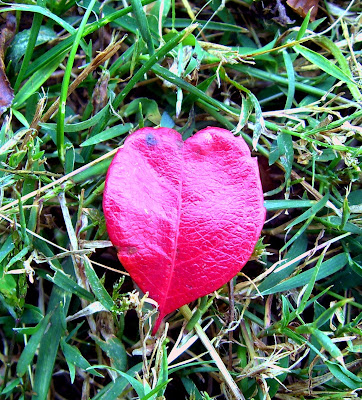 I see hearts wherever I go.

Each one comes with its own beliefs and feelings and rules. What life do you choose to live?
Posted by Hali Chambers at 8:53 AM