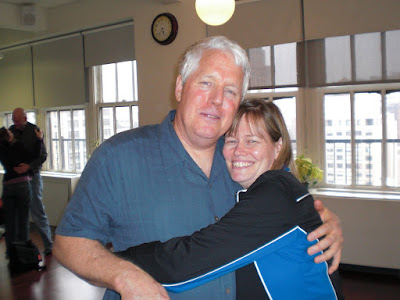 Anyway, I invited my old college friend, Anne, to Jerry's introductory talk on Friday night. During the break, we had a chance to talk and she just kept saying, "Wow. I get it!" She was even going to join for the weekend course. Jerry wanted to do a word-association exercise before we left for the evening and so he used Anne & another gal to demonstrate. It's all fun and games until someone gains awareness. She thought he was making fun of her response and nothing could convince her otherwise. I, being the lifelong friend I am, recognized this particular pattern. I called it "being present" for her . . . and turned my back. She's under the bus with Jerry. She'll be fine.

So there was a bit of dramedy with it all, and as we're walking to her car, I managed to calm her down a bit, but she said she was not coming back for the weekend. Blah blah blah she was embarrassed blah blah blah. And then. Then! She realized she'd left her coat. We walked back and couldn't get into the building. I said, "Perhaps this is the universe telling you that you need to come for the weekend." And . . . she did: 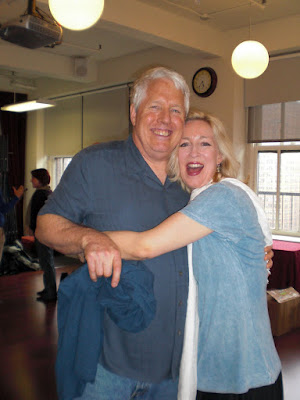 Sooooooup?
So she thought that Jerry was making fun of her for the way she said, "Soup." It was an old pattern of feeling embarrassed in school. No matter what anyone said, she was stuck there thinking we were all laughing at her. We weren't, but she couldn't see it. That's what happens when you get stuck; you don't have other ways of doing, being, seeing available to you. And then! It shifted, and she got it. Jerry is fond of saying, "Get it?" Yeah! What was also interesting about this interaction, was that there was a "Life Coach" who sided with Anne on Friday night and was reinforcing her reaction. Jerry later emailed her because she had been so concerned. He told her that Anne had joined for the weekend. As it turns out, she wasn't concerned about Anne. It was all the stuff it brought up in her. Isn't that interesting? We think an outside event did something to us, when really it was the catalyst for something inside us, already there.

Anne & I were looking forward to lunch that first day, so that we could catch up. And then! because it's Jerry, could we have a normal lunch? Hahahaha Of course not. But you'll have to wait til tomorrow to find out what happened. In the meantime, I will tell you this: guess what Anne had for lunch. That's right . . . soup.
Posted by Hali Chambers at 7:42 AM

I loved reading this! What a great snapshot of the weekend. Thanks for the smiles this a.m. :)

Adrien,
Thanks for stopping by! So glad you liked it--and thank YOU for the SMILES this a.m.! :-) H.

Hali! What a cool blog. Someday I hope to create a blog when I learn to use my pc at home. I love your smile and enjoyed the weekend seminar with you.

Auntie,
THANKS so much! I used to be so techno-phobic and clueless about computers. Having a blog has taught me so much--and it's so much FUN! :-) H.

Hali thanks for creating this blog of our course Embracing Being in NYC, March 27,28 and Sunday 29, Jerry Stockings did a fantastic job helping me eliminate illusions, not blocking my emotions but observe them and move then gently were they belong. I had a delightful time and was an absolute treat for me.
Thank you all (little bears) :o)
Dimitrios

Hello everyone,
Just wanted to let everybody know that I enjoyed last night's tele-conference, my first one ever, it was fun and i liked it.
I would like to thank everyone who helped me, supported me go through my breakdowns that i had after our course, and believe me i had so many. It was very uncomfortable to get rid of addictions and bad habits that i had.
I contacted Wayne, Marjorie,Tracey,and they supported me but the one who really gave me the wake up punch was Jamie, she just knew what to do with me and how to treat me properly, i'll never forget when she told me "celebrate being alive now".
Thank you all.

I love your blog! Beautiful insights! It was wonderful being with you in NYC.

Dimitrios,
Thank you for the wonderful reminder to "celebrate being alive now."

Charlie,
LOVED your book, read it to my nephews & niece. Life really IS a playground!

Looking FW to seeing everyone again in NYC in June! :-) H.