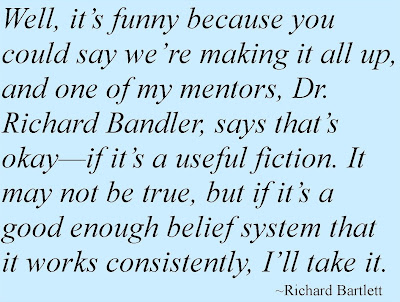 The above quote is in answer to a question about a time travel technique, but it could be used to describe Matrix Energetics as a whole. I have delayed writing about my experiences because I can jump down on either side of the fence. I'm reminded of a saying, Some people will swallow a camel but choke on a peanut. So here's the camel part for me, based on personal experience--and Star Trek: 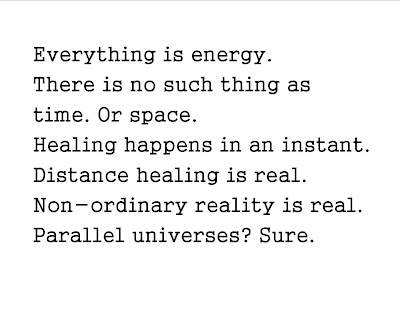 I get the concepts and the content. None of it was really new. [Side note here: Even tho I spent 3 days with Richard, my favourite "Matrix" memory is still the first time I saw Bruce Lipton. He was waving his arms around saying how our beliefs govern our biology and I raised my hand and said, "Bruce, what you're describing sounds a lot like The Matrix." He said, "It IS The Matrix!!!"]

Back to Richard (& this is the peanut part): I said in yesterday's post, he's a bit of a goofball. A lot of getting people up on stage, touching them or not, watching them drop to the floor, and then he's falling over laughing. Literally. In fact, any time a participant gets up there, there's a staff member who follows them up with the express purpose of catching them when they fall. No hypnosis there! [In fact, there was a whole lot of hypnosis going on, more on that later.]

Brother D & I were talking about religion. He said, "They all look crazy from the outside." That is what Matrix Energetics is like! And what is crazy? What is normal? What is real? All of it and none of it. We're in a quantum soup. Richard says that every healing modality has a set of rules that you have to buy into. e.g. Reiki. Those rules set the parameters, your expectations and your filters about what's possible. Or not. When you're on the inside looking out, it's all normal. For Reiki or Resonance Repatterning, it's normal to be able to do distant healing. Playing a tuning fork on a diagram of an acupuncture point will affect the client whether they're sitting in the room or across the world.

This is Richard's normal world: dolphins swimming around the seminar room and the carpet melting. He had a participant up on stage and he said that he saw a pair of purple bunny ears on him. "Some of you can see them, too." I look around and people are nodding their heads. Yes, we see the purple bunny ears. I'm watching this and thinking that the emperor has no clothes. At the same time, people are having fun with this. And he's obviously having fun. What is it like to enter someone's world?

The metaphor that comes to mind is this: do you take the bible literally or symbolically? In other words, 6 actual days for the creation of earth or is it a metaphor? Do you see with your physical eyes or your third eye? Is it real? Again, what is real? It's real if you're in that world. So I entered Richard's world. Some of you may not think that was much of a stretch. There are a few techniques, but really, anything goes:

The 2-point technique~put your hands on 2 points of the body (whichever you're drawn to) and imagine dropping a pebble in a pond. That's it. The pebble is a metaphor for the energy field. It's really to keep the conscious mind occupied. His assistant Melissa said she's at Nordstrom's shoe shopping.
Time travel~ count backwards to before something happened and see the desired outcome of an incident not happening. e.g. spraining your ankle
Parallel universes~ alternate realities that are going on elsewhere. I see it as whenever you have a choice, there's a split into another reality. e.g. you married your highschool sweetheart--or if you did in this reality, you didn't in another.

You can work on the body or on the energy field. Whatever you see, go with it. Richard
has a thing for hotel carpet. I was working with Vicky-from-NY and she said that I needed the star in this carpet on my back: 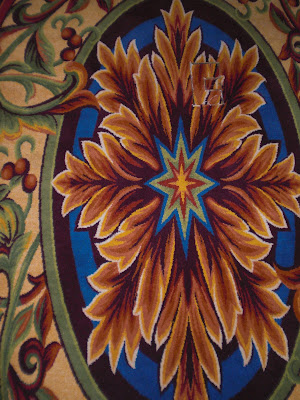 This is how it looked: 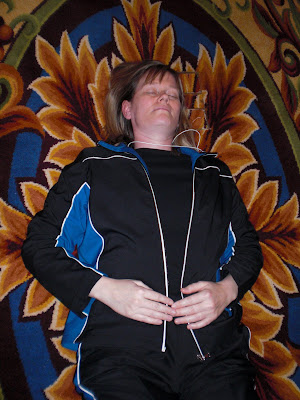 I've had a difficult time putting this to words because there were so many experiences to integrate. And for the first couple days, the loud music and the constant giggling felt a bit ungrounding. Blah blah physics blah blah melting carpet blah blah Hahahaha

People will either buy into this or not. I don't think there will be any middle ground with Matrix Energetics. You'll be in the club or not. And all of that is fine with Richard, I'm sure. He's just having fun with it all.

Posted by Hali Chambers at 9:02 AM

Hadn't been on your blog in a while &this morning my intuition said,"Check it out." Soo after Listening to Richard, I called a friend here in BS who has taken 2 classes. I do so enjoy always your sharings with all of us. Thanks!
:-)Alaria