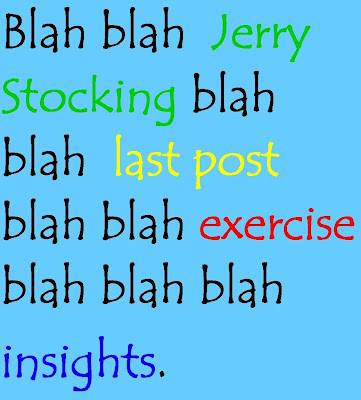 This was one of my favourite parts of the weekend with Jerry. We did an exercise where we were only allowed to say "blah." And we were to tell our partner about a problem we were having, and then our partner would give us advice, also saying nothing but "blah."

Rewind to break time right before the exercise. I had just had a conversation with Jamie along the same theme. Blah, blah, blah what should I do? I don't remember how I responded, but it didn't feel all that inspiring. Back to the exercise:

I felt much more present listening to the blah blah than I did when we were having an actual conversation with words. Taking away the content opened a path to the other-than-conscious. I was much more aware of Jamie's physiology, tonality, facial expressions, posture, etc. At the same time, I felt a calmness and sense of peace. It sort of took the pressure off of having to know anything or give a right answer. I just had to be there. And it didn't matter what I said, but how I said it. How do you communicate presence and warmth and caring? That's what came out of it. And in the process, I felt more deeply. There was a deeper sense of connection that hadn't happened in our previous conversation. All from a few blah blah's.