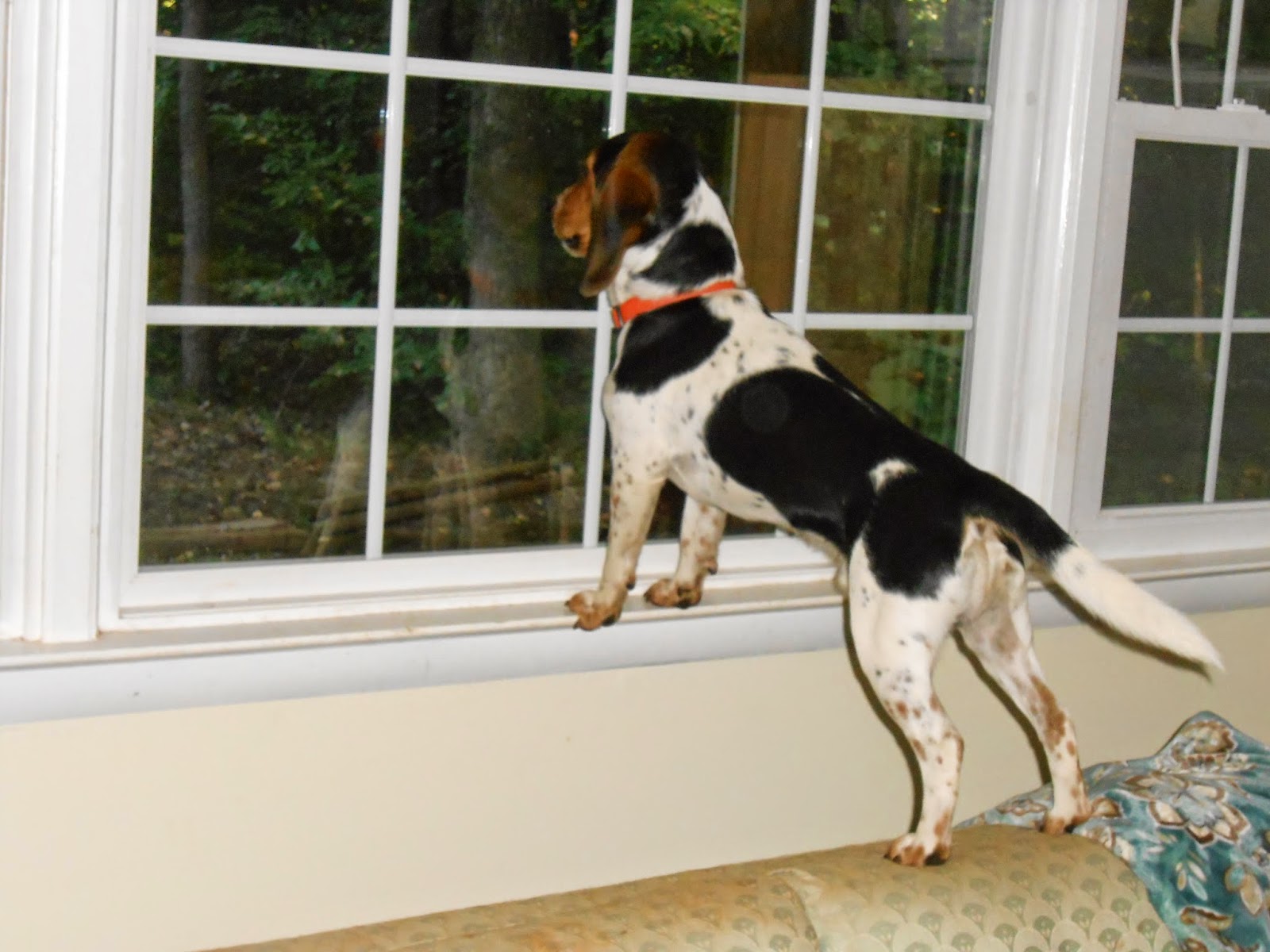 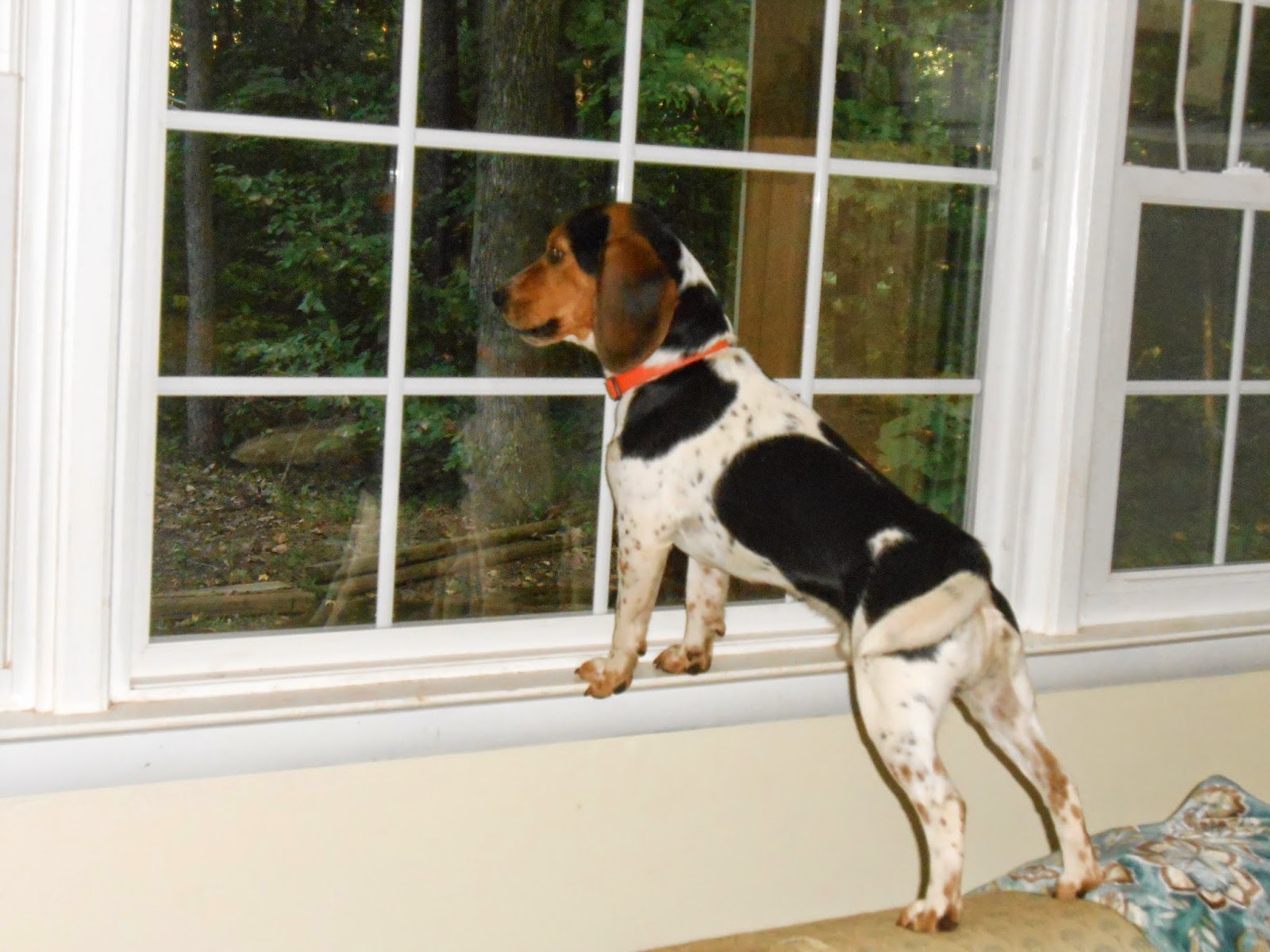 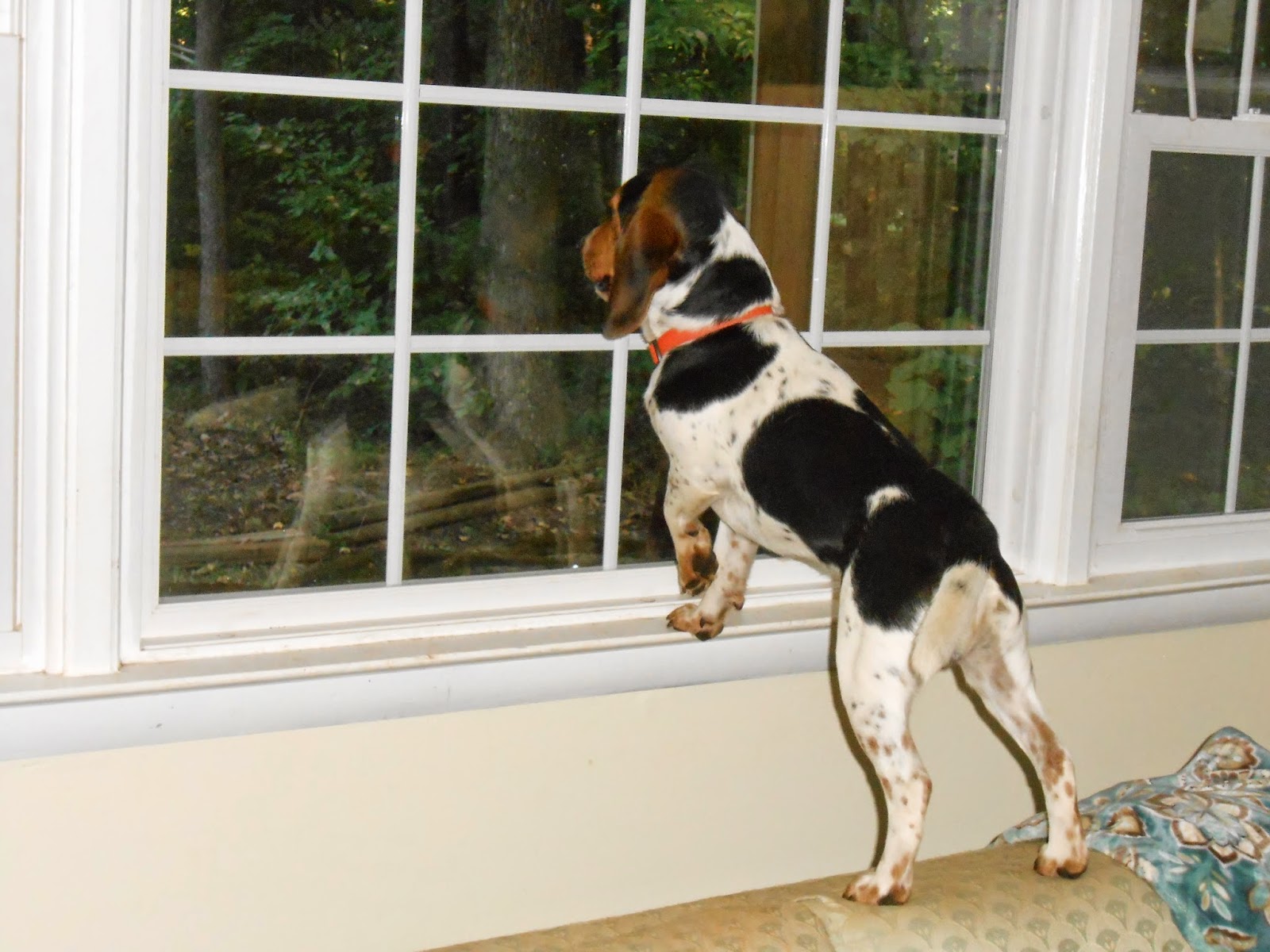 I was in the shower & I heard the dogs barking--not unusual. But it was a different kind of barking. You know the kind. Anyway, Reggie was at the front door & Bingo was barking and Buddy . . . wait, where's Buddy? I hear him barking . . . IN THE FRONT YARD!  So, with towel secured I went dashing out there. And there I see him sitting in front of Tabby Bobcat yapping away. Tabby is sitting frozen, looking up at him. "What are you doing?! You are so lucky you still have a face. Come here!" And then all the while looking at me, slinks over to the gravel driveway. "Really?!  You're making me come get you on the gravel in my bare feet?"  Gah!

Then I went to investigate how he got out of the yard. [I got dressed first. Did I need to add that little tidbit? I wasn't inspecting the fence in my towel, is what I'm saying.]

Chiro-sis was over for a cup of tea, so we secured the point of escape:

Tuesday I got home from being out, and by "being out" I mean wearing nice clothes. I let the dogs out & again with the barking. I go out & Buddy has escaped again & is in front of the fence. I go after him, he wasn't that far from me after all. Boy he's fast!  So then I'm running after him thru the woods. All the houses on my street have woods behind them along the lake and no fences. So he's happily bounding away and all along, I could here him. So I got in my car and went down to where he was...and then I heard him heading back to my house.  Hehhhh . . . .

So I finally got him down by the lake. Fortunately I nabbed him before he headed into the marsh. I get him on the leash as I'm sucking wind. He's all excited and sniffing around on the trail of something. "Come on, bloodhound. Time to go back home." And then I look at where I'm standing in the middle of the woods and realize something: When I'm scared about my dog and running after him, I'm not thinking about snakes or spiders or poison ivy. But when I looked back from my starting point, all of a sudden I'm aware. Chasing after him I plowed thru several spiderwebs. Why do they build them at face level? Why?!  But we made it home.

I went to inspect the fence & found his exit point: he could flatten himself out like a badger and slide under the entire fence by the gate!  So I have more fence securing to do. But look: 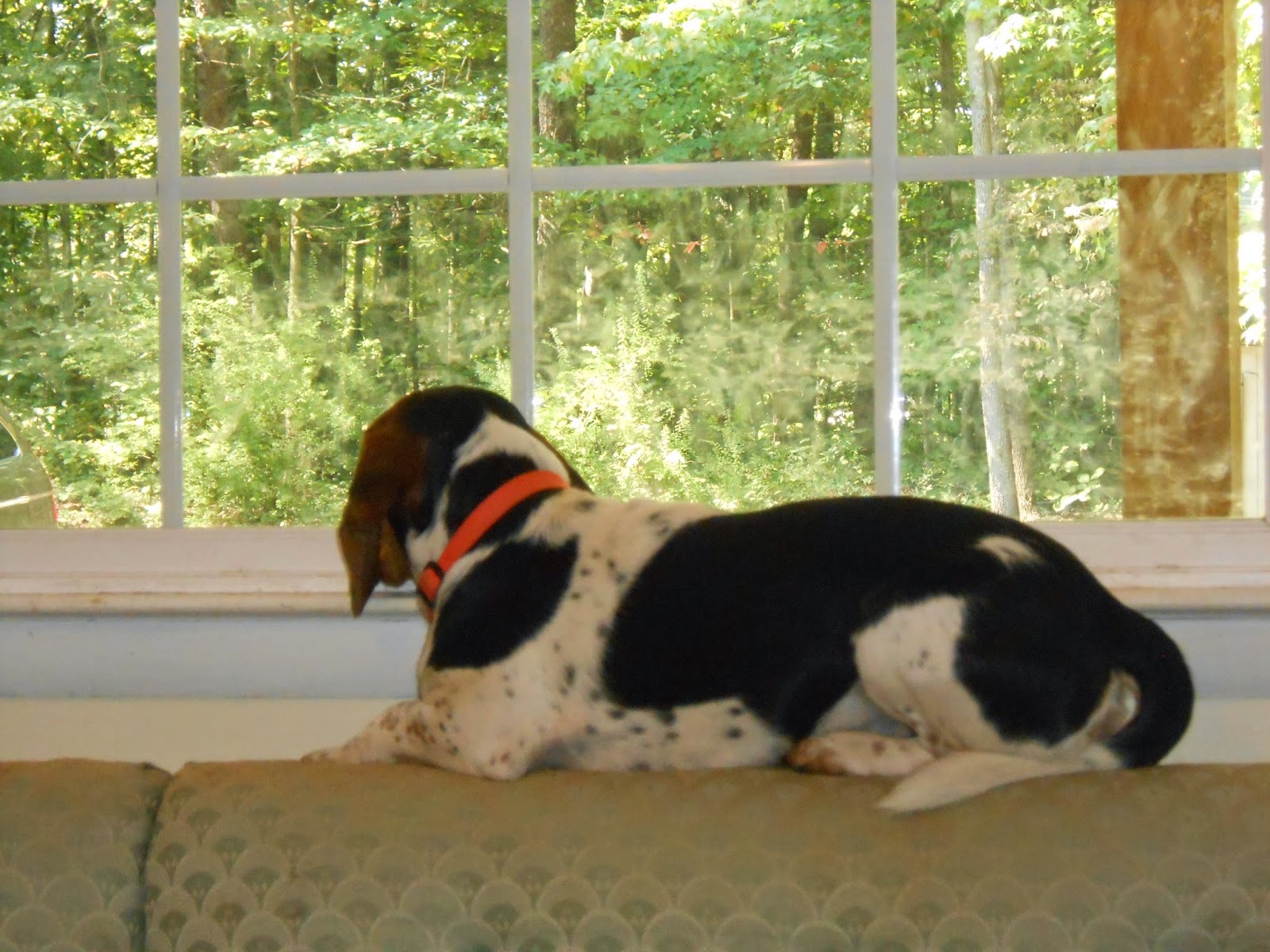 Chiro-sis says that I'm like a first time mother with her first born. Because this:

And Buddy got yogurt on his nose & he couldn't lick it off: 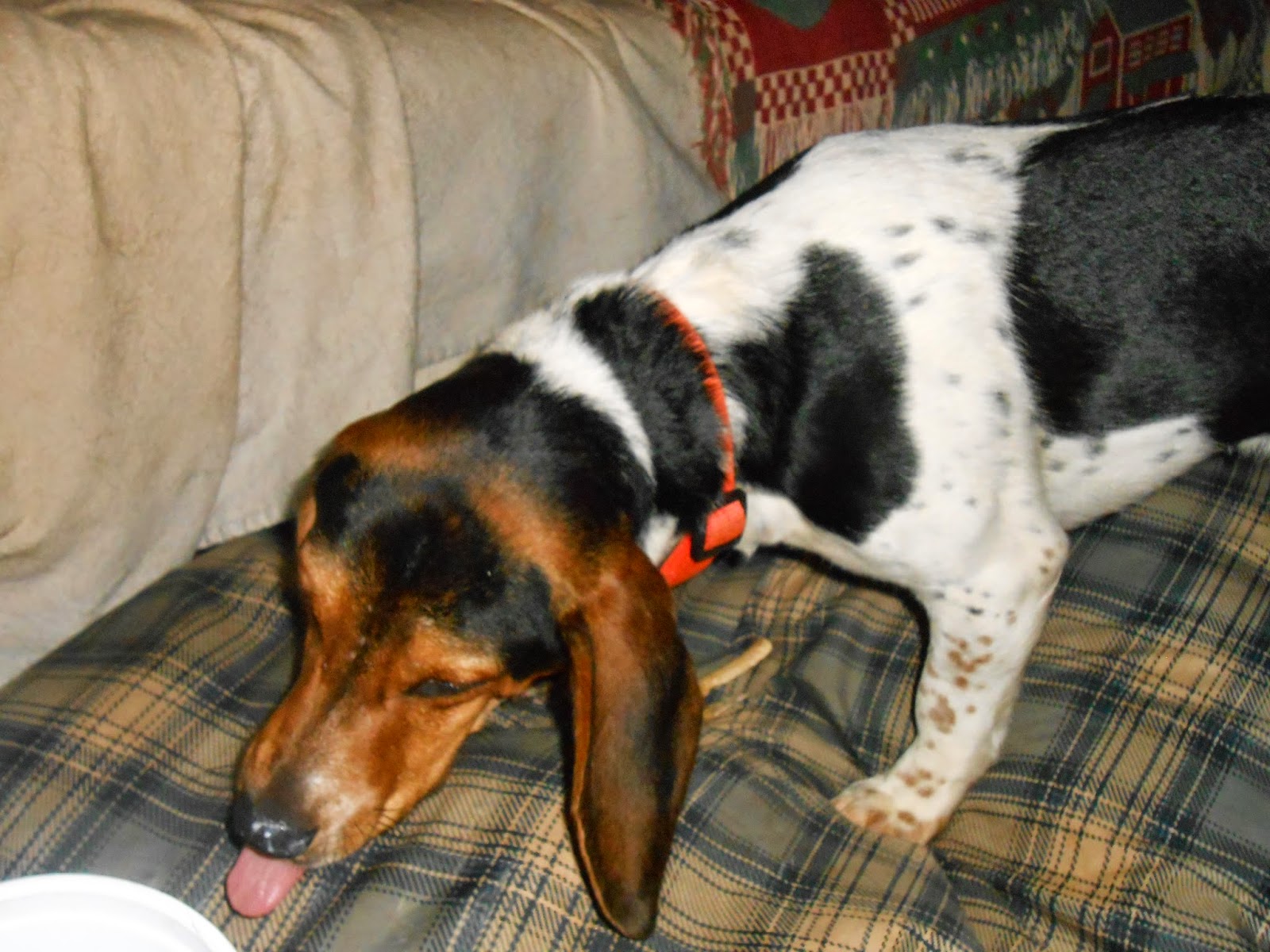 Lest you think the blog has gone to Buddy, here's Bingo under the table with hers: 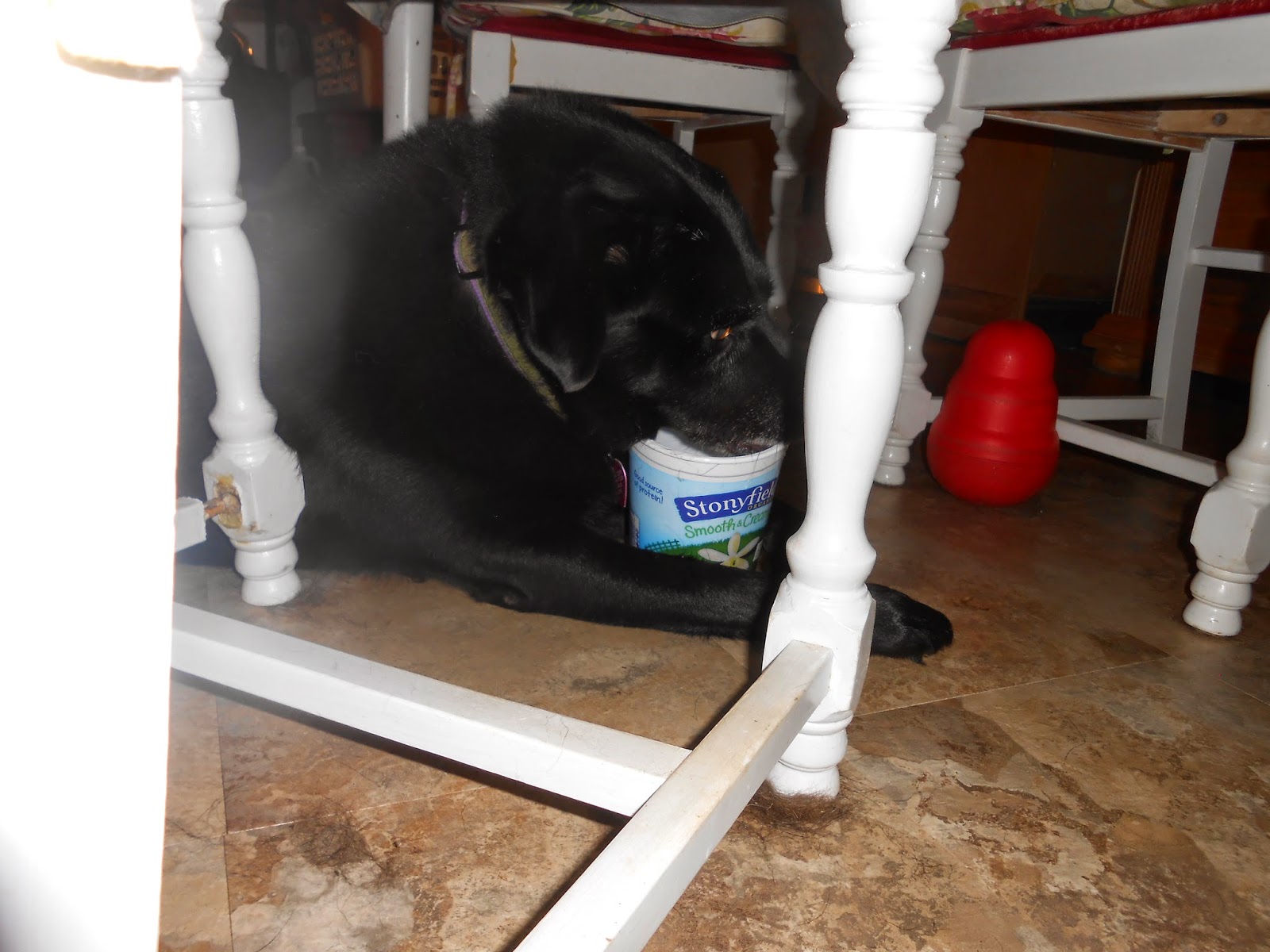 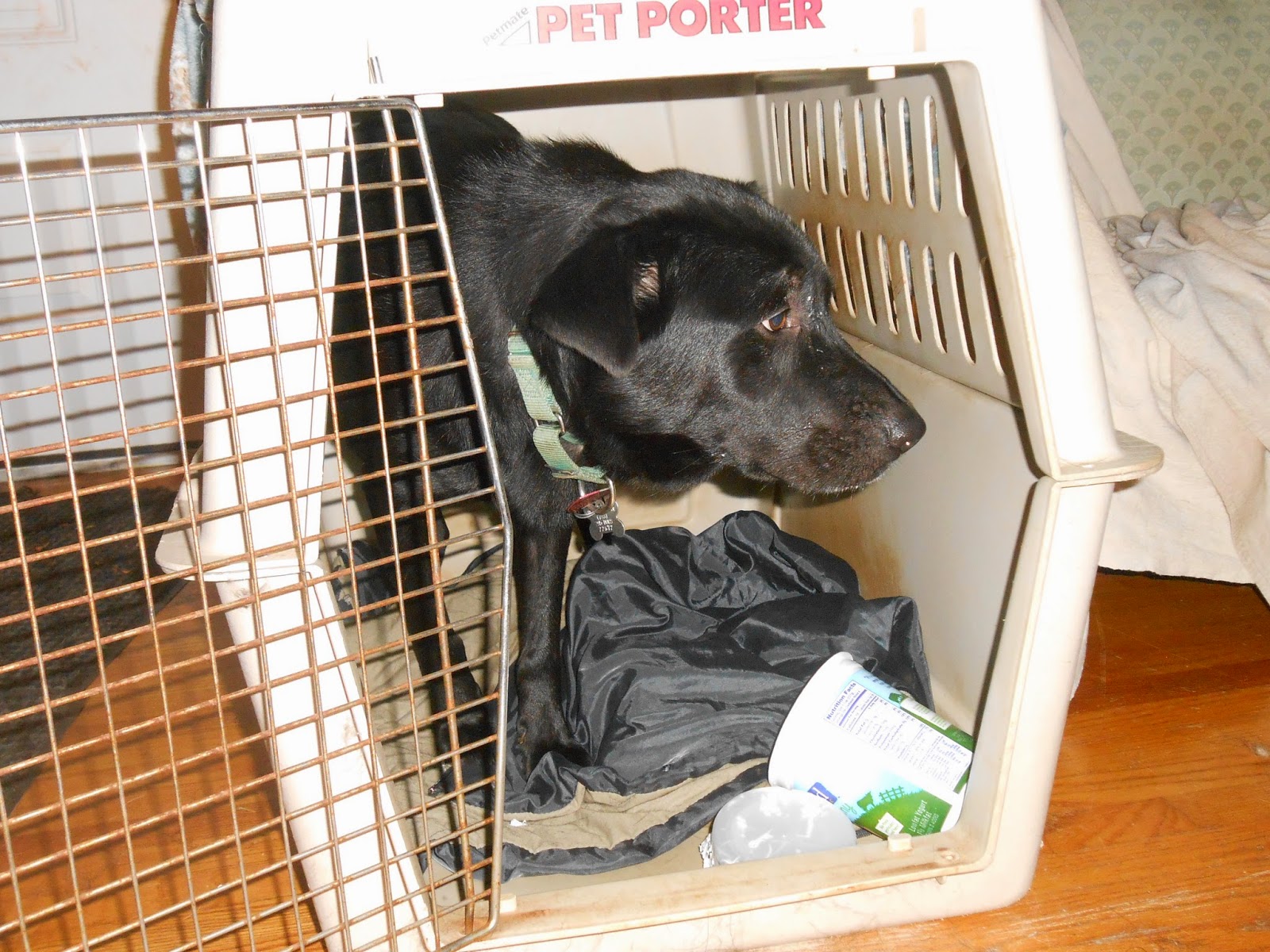 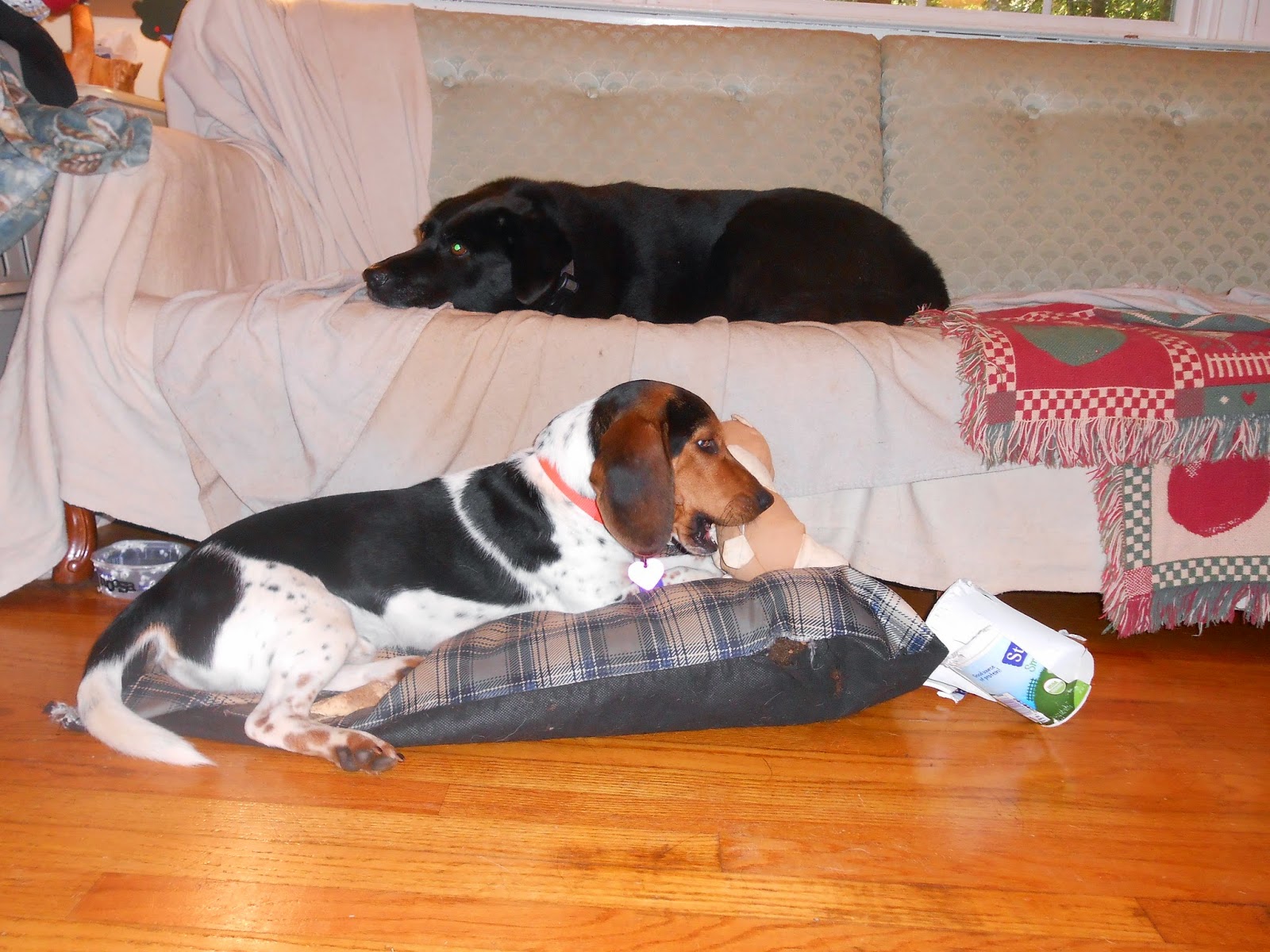 My sweet Bingo, non-destroyer of the sofa: 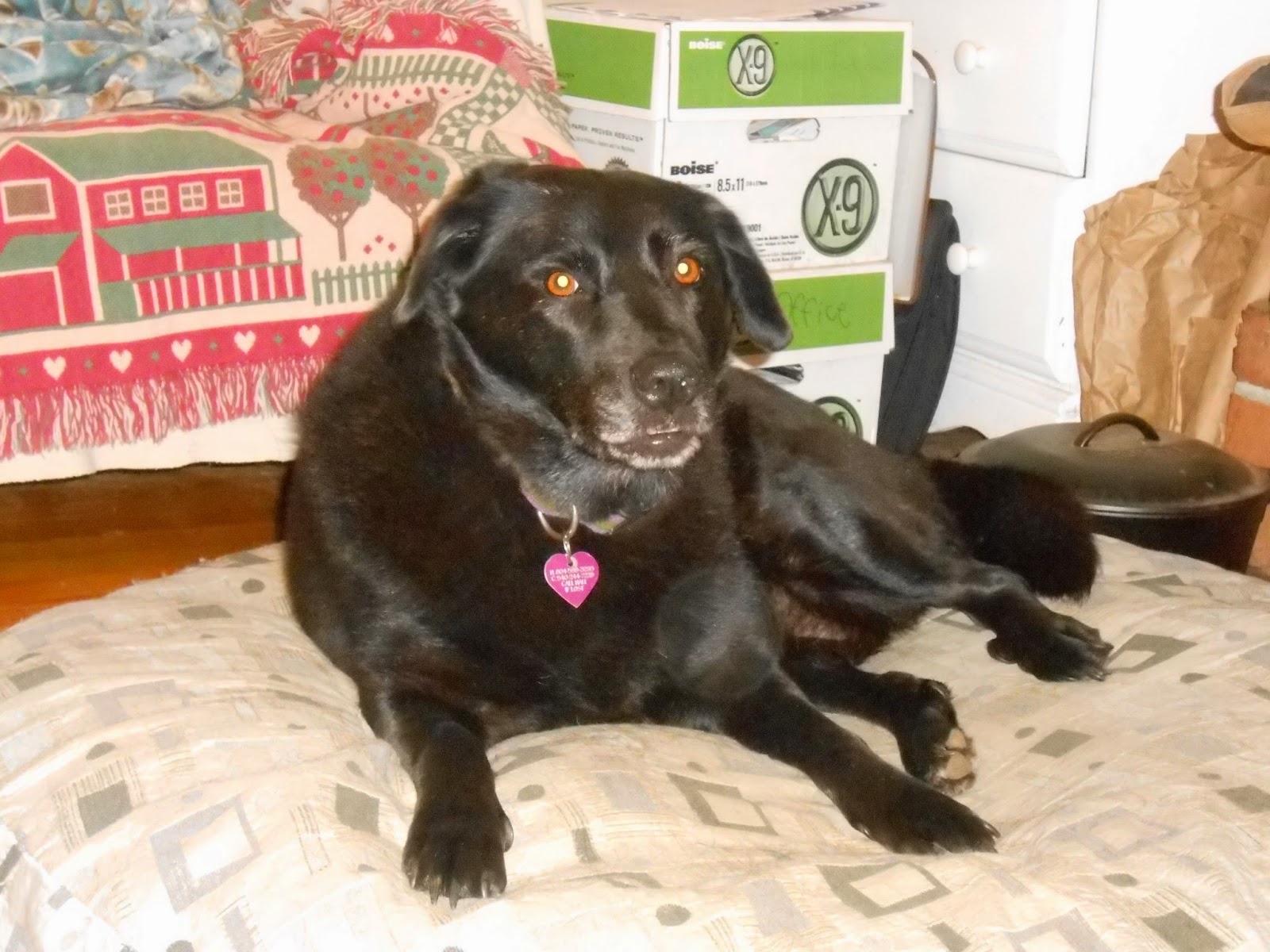 In the office:
He likes to jump up on my chair & wedge himself between my back & the chair. The he bends himself around my side & starts desk surfing. No paper or pen or anything is safe from his wandering lips but especially my tea cup. He is partial to PG Tips, of course!


In the living room:
Shoes
"Again with the shoes?" you may be thinking. "Haven't you learned your lesson?" Yes. But these were hidden under the side table by the door, so Buddy couldn't get to them. Except that I moved the sofa away from the window after I cleaned off all the doggie nose prints, courtesy of Buddy & Reggie. And so he went behind the sofa & got them from the other end. I didn't realize until:
The other one was still on the shelf. But I went outside to check for others. And of course: 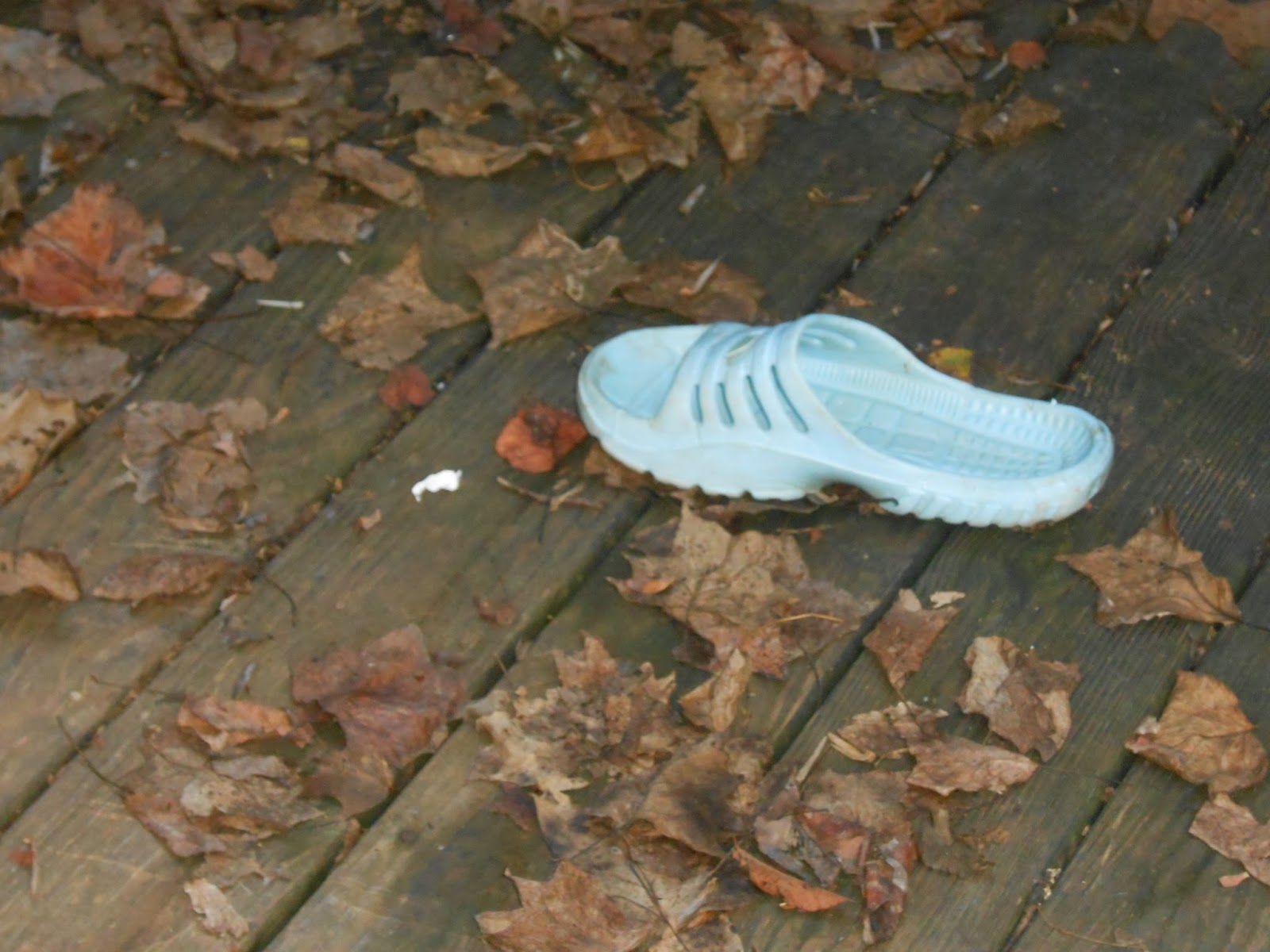 While we're out in the back, check out the holes:
This will give you an idea of how deep:
Here he is during my inspection:
But then this: 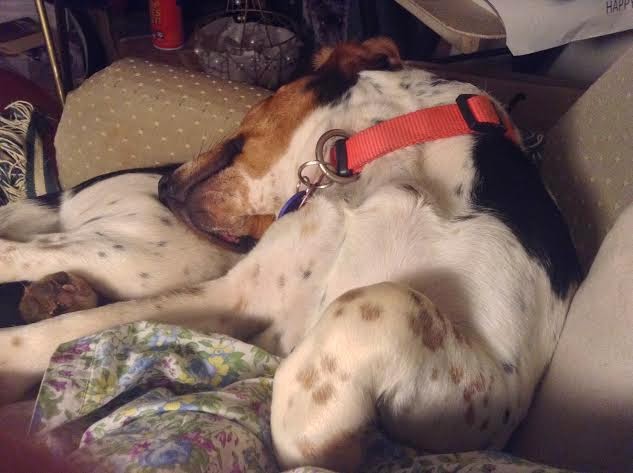 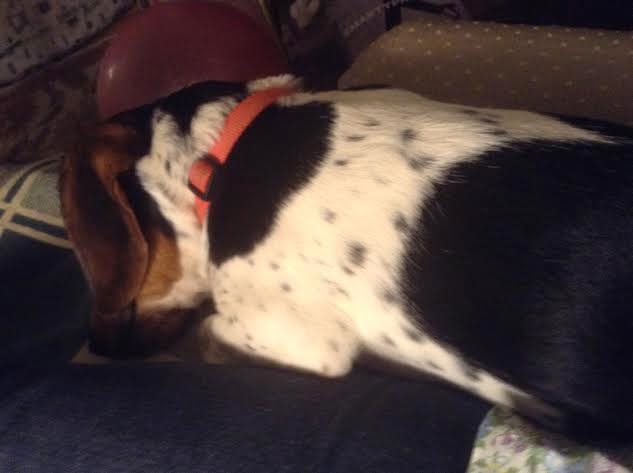 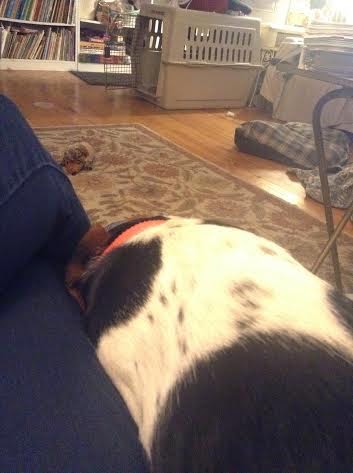 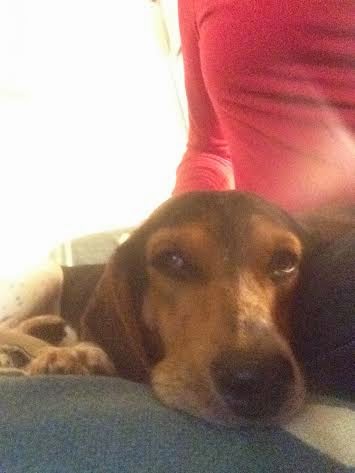 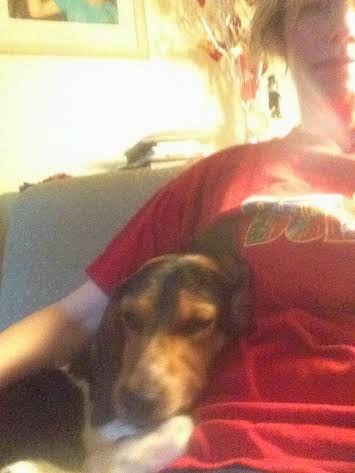 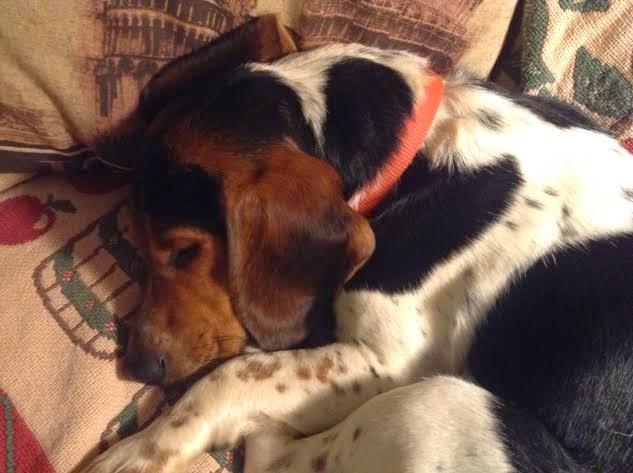 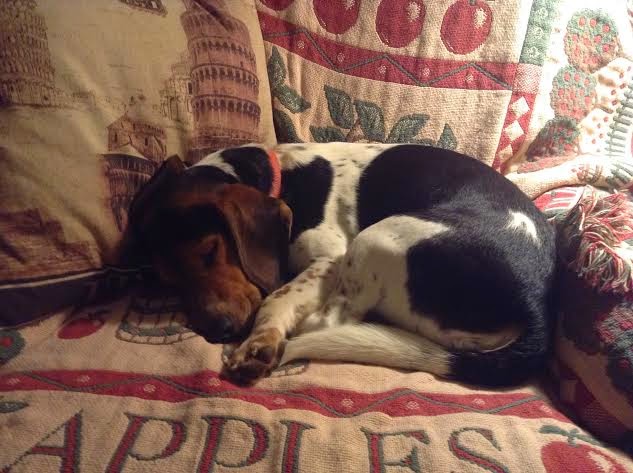 In The Back Yard

View out the kitchen window: 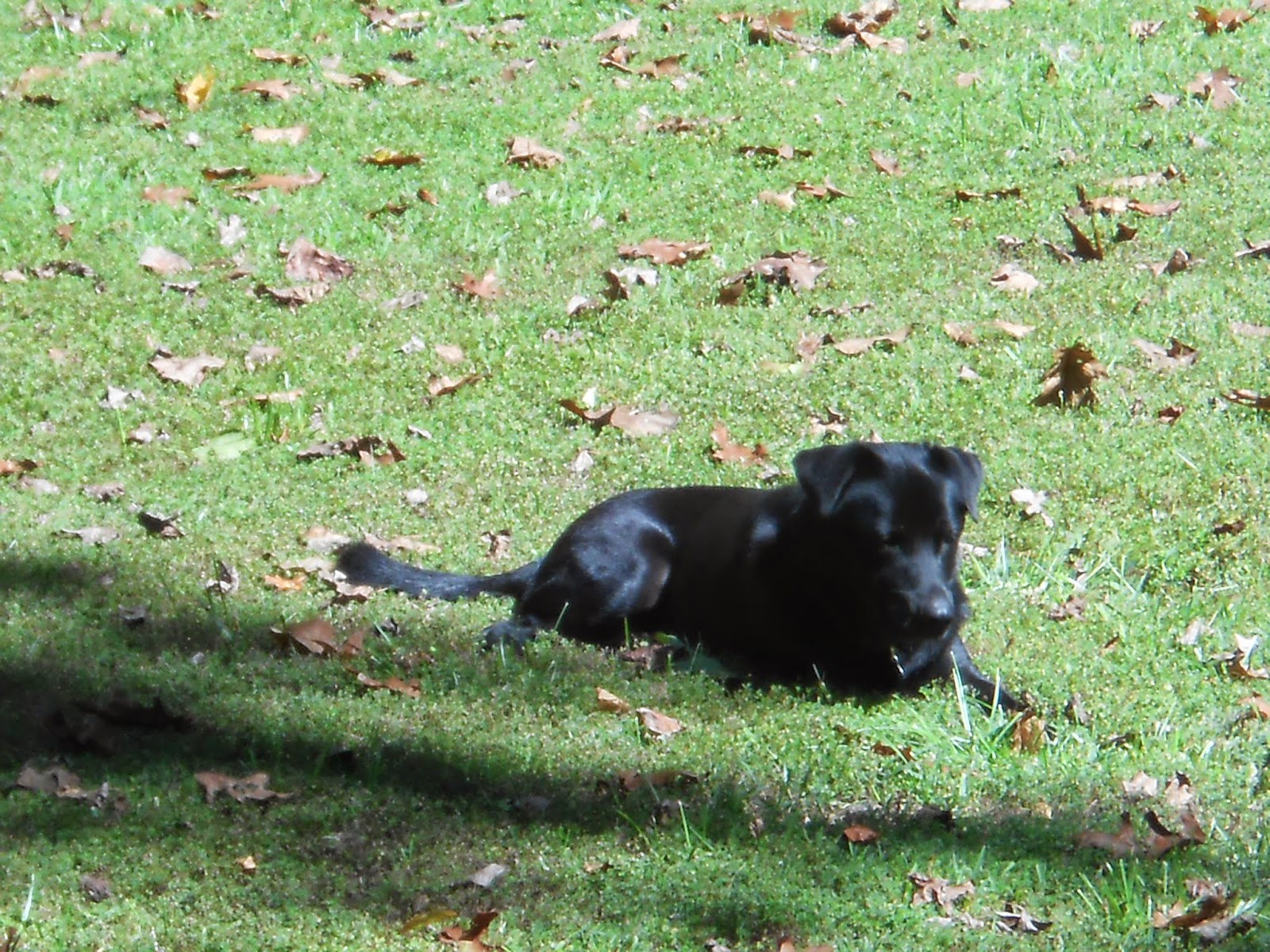 Laundry Day
I did all the dog bed covers. I put them on the chair & I was putting one on and Buddy jumped up:

Bingo on her bed. Buddy on this one: 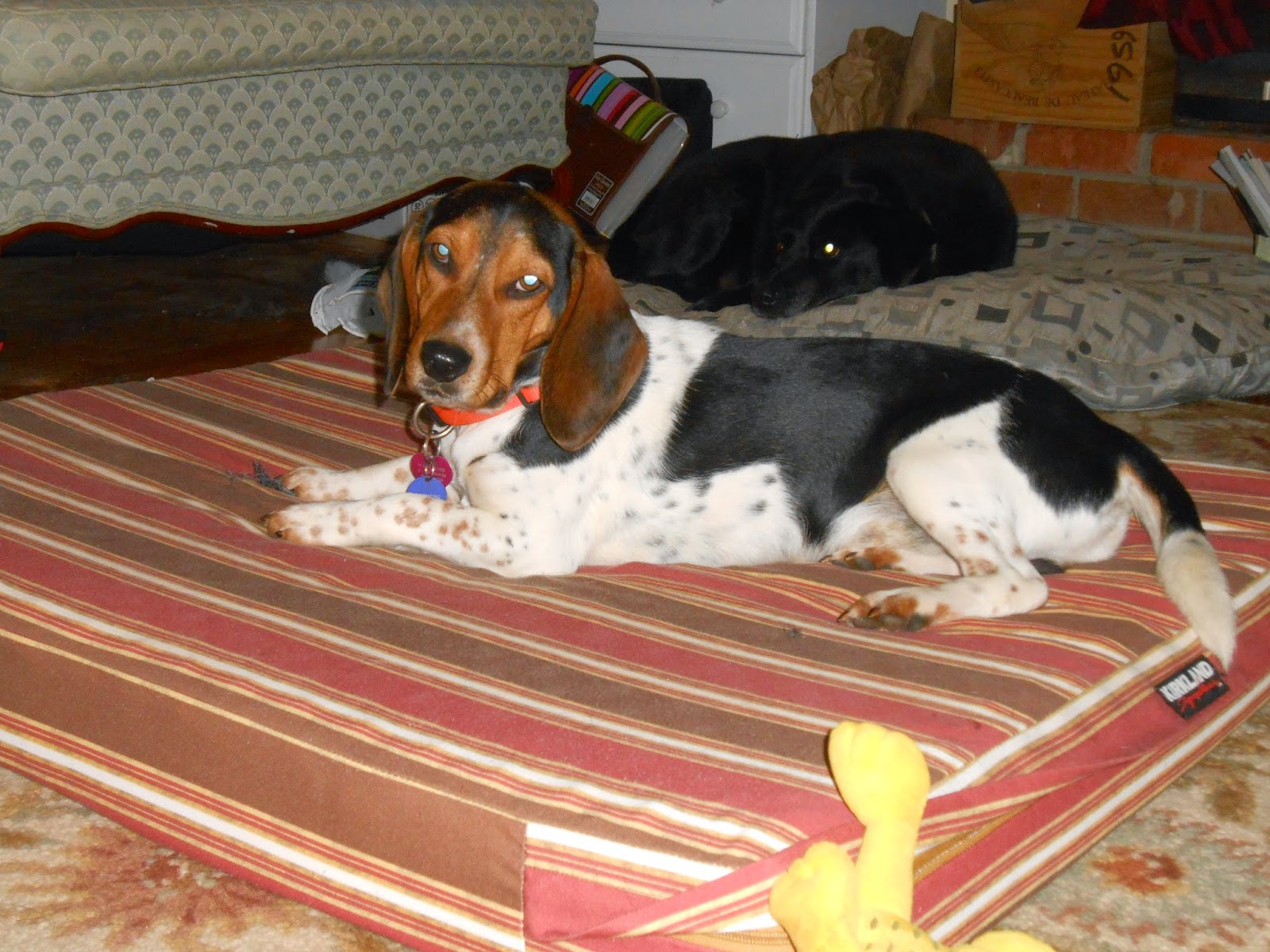 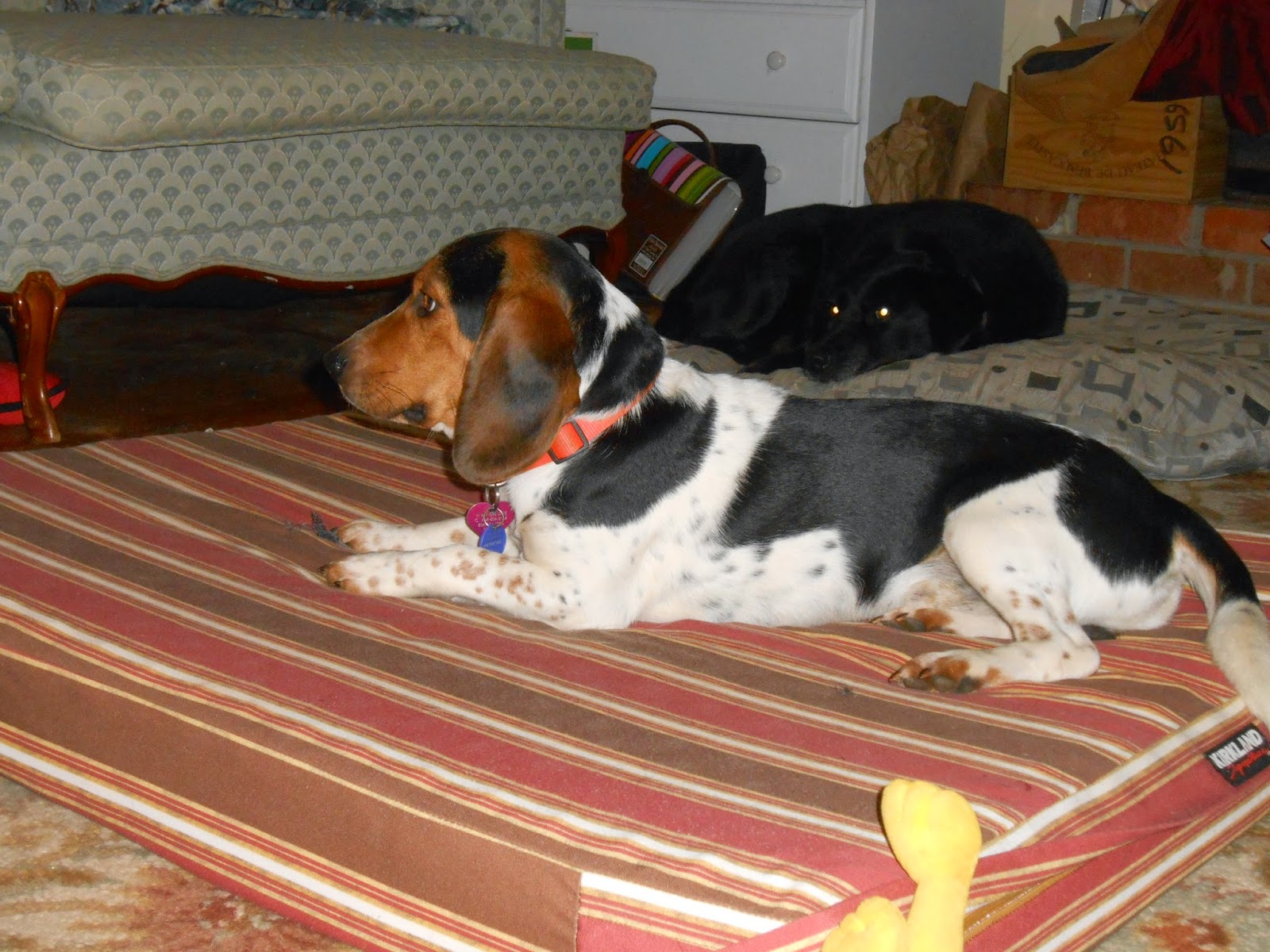 I tried to get a shot of Reggie but he slinked off: 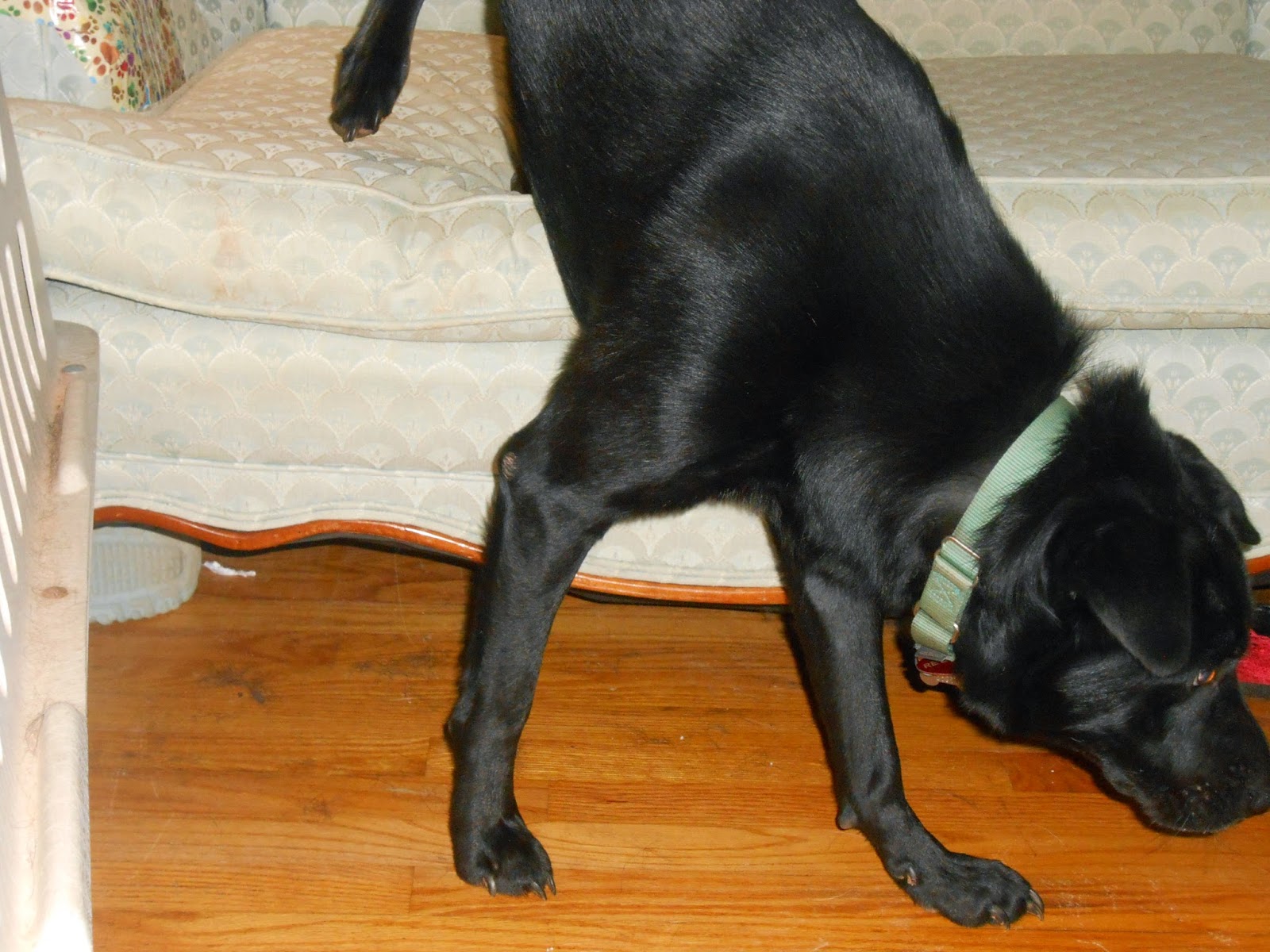 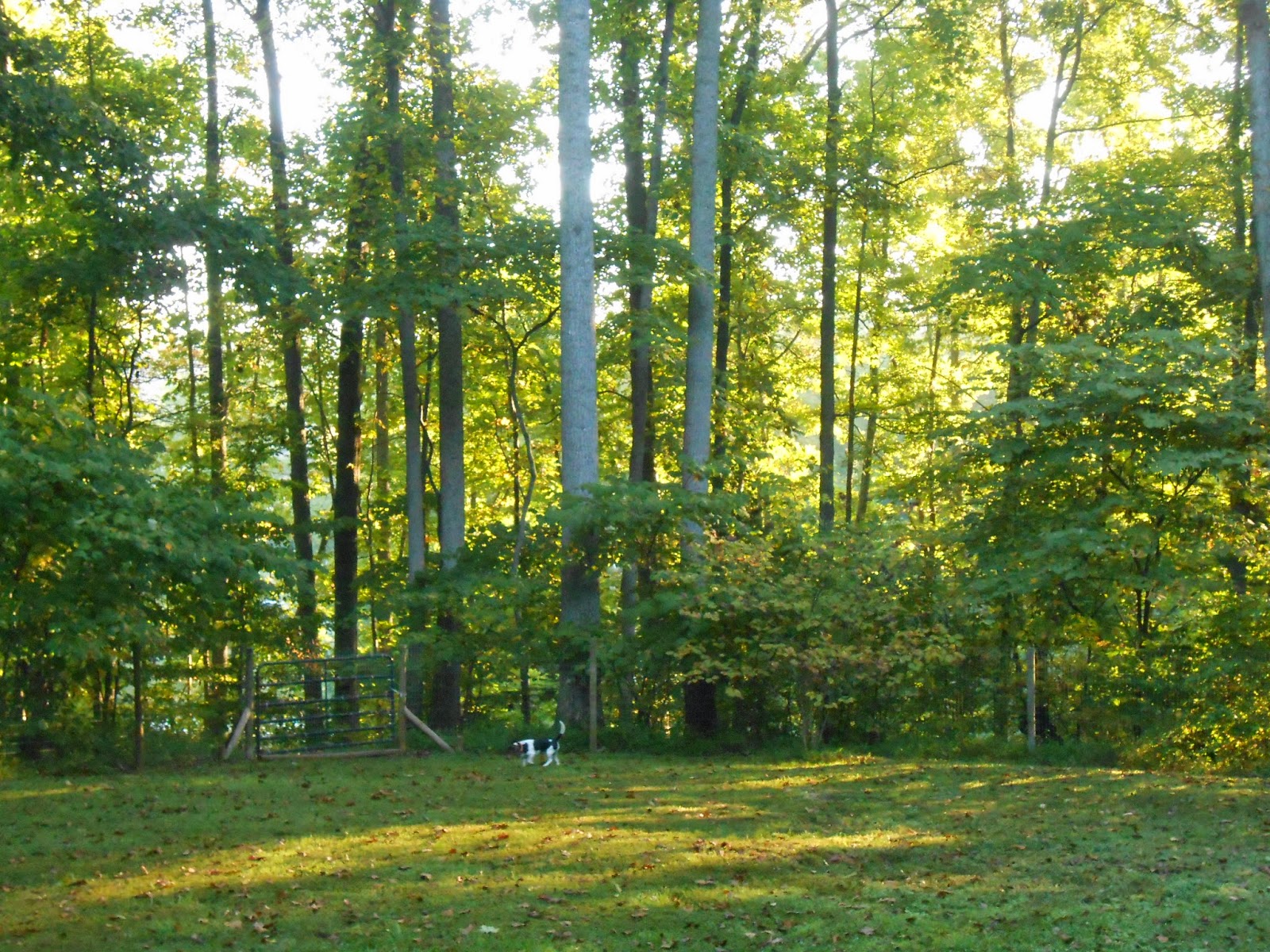 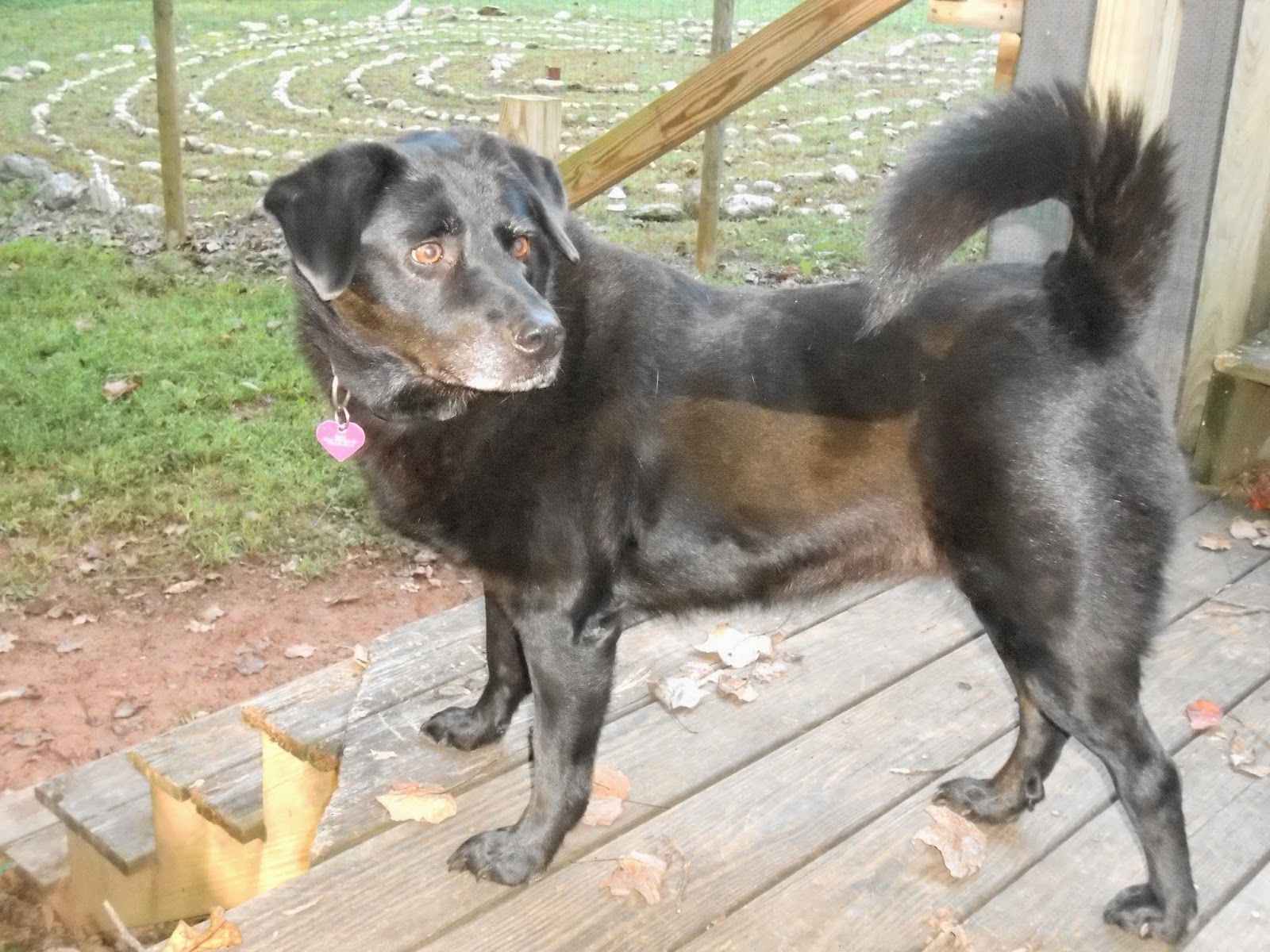 And that's our week. All is well in the House of Chambers. :-) HAPPY Monday!