Nephew Ro is Paul Simon this Halloween. Here he is with Dad as Garfunkel:

Posted by Hali Chambers at 7:50 PM No comments:

I got this London Fog Chic Sparrow from a Facebook Chic Sparrow Buy, Sell, Trade group.  I was a bit too fast in buying it because I've always wanted a Chic Sparrow, and it was "London Fog" and-and-and!  It's beautiful and the craftsmanship is impeccable. But . . . it's grey and I'm not such a fan.

Then I saw a video where someone distressed their notebook. Then I saw another one by Elena Bedner who gave a bit more of the How To. That was the inspiration to take the plunge and distress my Chic Sparrow.


I got the Tim Holtz stencil & then I used some of my Noodler's black ink on a Q-Tip. And here it is: 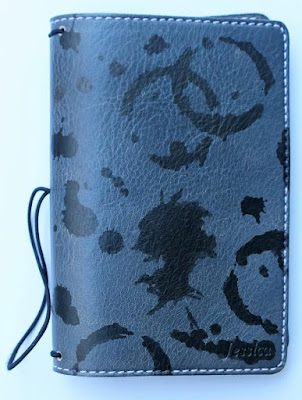 That bottom ink splat is very special:
Here's the whole thing:
If you look carefully on the lower right corner, you can see the name of the gal I bought it from: 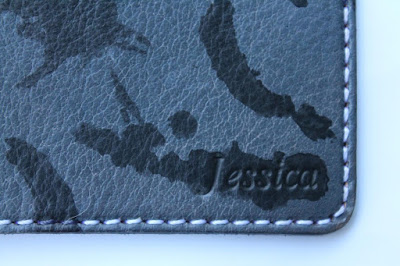 Inside, I didn't do too much. I did an initial ink test on the pen loop & I stamped a tea cup on the secretary pocket: 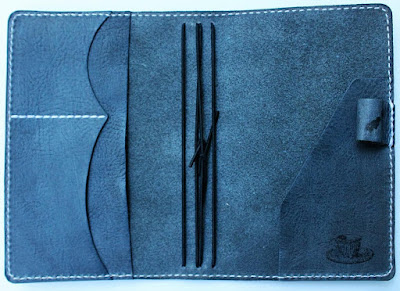 And there you have it.  I'm still not glued to it and I've offered to sell it to another Jessica in the FB group who was interested, so I'm giving her first refusal. If she doesn't buy it, I'll post it on the group for $65. If you see it here and are interested, you can leave a comment below. You'll need PayPal, tho.

Posted by Hali Chambers at 8:05 PM No comments: 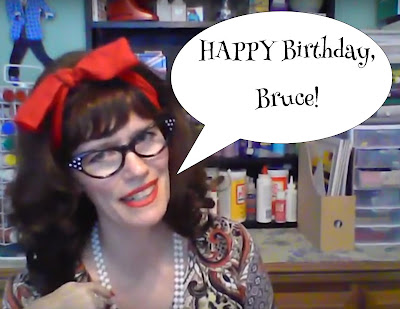 Today we celebrate the celebrating biologist, Dr. Bruce Lipton. He is one of the most joyful people you will ever meet. Here's a summary I wrote a few a years ago called Bruce Lipton 101.

"Cancer is a lifestyle consequence."

"Change your perception and you change the function of your cells."

"You control the genes by the way you live your life."

"You're not a victim, you're a MASTER of your biology."

"Your life matches your beliefs."

"Kids learn without you teaching them." (Re: subconscious programming).

"How can you find love if you can't love yourself?"

Here are some of my favourite photos that I've taken over the years:
We were at I Can Do It! Conference in Baltimore in 2014. We were walking up the street and Wayne Dyer was coming toward us. Luckily I had my camera! 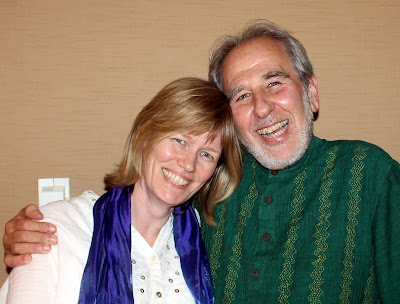 I'll leave you with a great summary from Bruce about his work. It's especially relevant now:

HAPPY Birthday, Bruce!!!
Posted by Hali Chambers at 10:21 AM No comments:

A Tribute to Snuffy 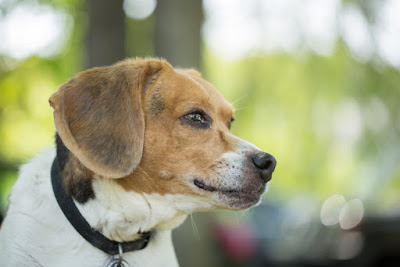 It is a hard thing to say goodbye to our loved ones. It is especially hard when we have to say goodbye to our animal companions. In grieving through the deaths of Barkley, Remi, Millie, and Maggie, my boss and dear friend, John Morgan, has been there to support and comfort me. He told me, "There are two kinds of people in the world. Those who have dogs, and those who don't get it."

It is with heavy heart that I must write that yesterday, John Morgan and his family had to say goodbye to Snuffy, the black-nosed beagle. He was the famous dog on the cover of John's Hypnosis for Dogs CD: 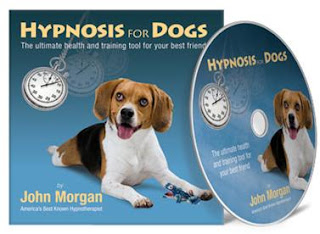 I am remembering the first time I met Snuffy. I was going on the road with John Morgan for a week of seminars in New England. He picked me up at the airport and drove me home to have dinner with his family. He opened the front door and Snuffy came running out. As he ran around, John narrated like a football announcer, if he were a radio guy. Snuffy started with circle-eights in the front yard. Then he ran up to a mailbox and lifted his leg. "That's right, say 'hello' to the mailbox, Snuffy."

Snuffy was a constant source of entertainment as I would hear his Roo-Roos through the phone, when I was talking to John. Even more entertaining were John's conversations with Snuffy.


"Give me that rope, Snuffy. You heard me: ROPE."
"It's 8 degrees out, but we're big boys, Snuffy. You know, it's this kind of weather that makes you feel alive . . . or close to death. I think my ears are going to snap off." 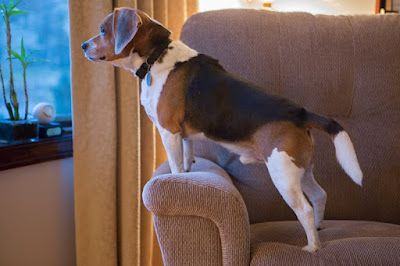 John comes home from being out.  "Snuffy, come over and give Poppy a kiss." [Snuffy licks his forehead]. "Oh, Snuffy. This is more healing than the water at Lourdes."

Graphic made in last election: 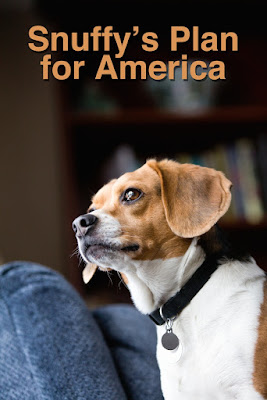 VET: Snuffy may have glaucoma.
John: Will he have to wear glasses?

[Whispers]  "The bloodhound just walked by a rabbit." 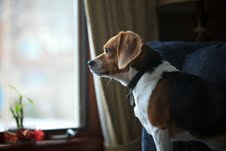 "Snuffy, big boys go OUTSIDE. We don't want to be like those cats. We hate cats." 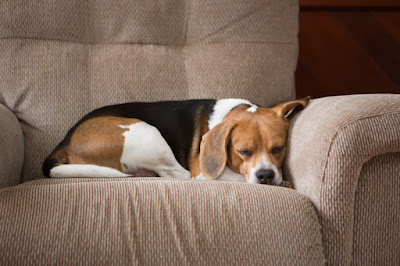 "On the beach you may be a CHICK magnet, Snuffy. But in the woods, you're a TICK magnet."


Snuffy was truly a part of the family. Every year, they celebrated his birthday on October 16th: 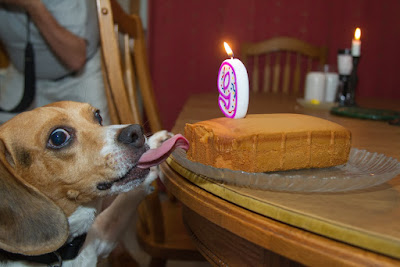 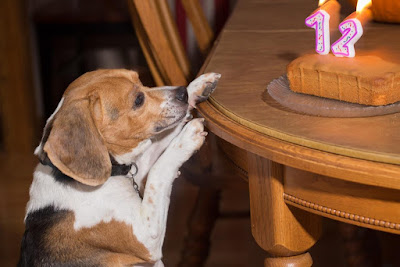 Complete with prezzies:
Lenny the Leopard draped on Snuffy does not distract Snuffy from his ball:
Snuffy was part of all family birthdays and holidays. Here's his stocking for Christmas: 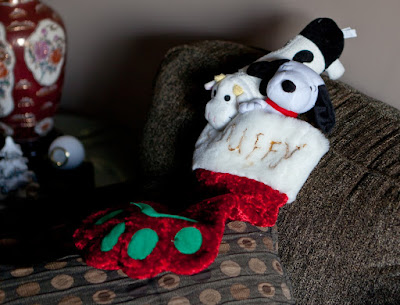 Oh, what a good boy, Snuffy. Santa, are you watching?" 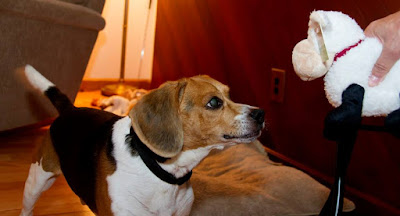 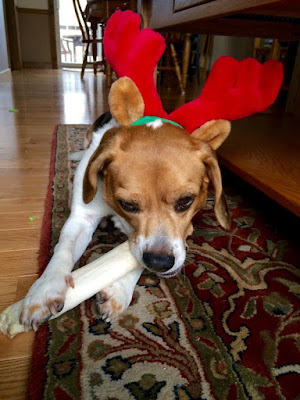 And here are a few more sleeping photos: 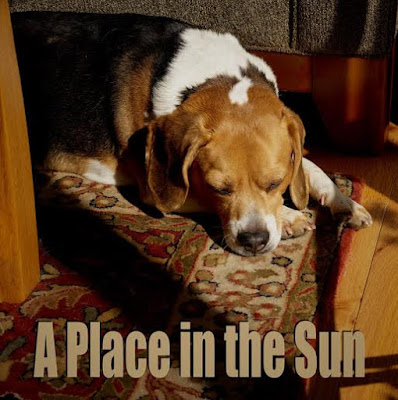 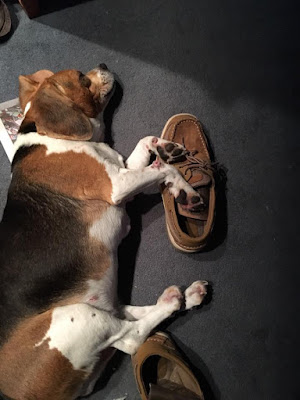 Once I got my own beagle, I felt even closer to Snuffy. Whenever I would says something Buddy had done, John would say, "Yeah, they do that."  Like having their backs up against something: 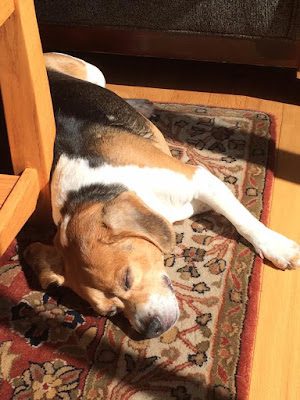 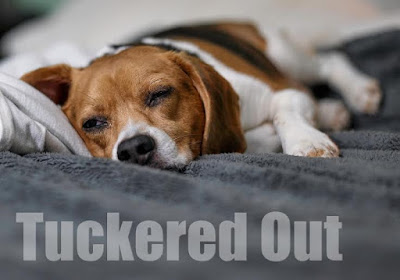 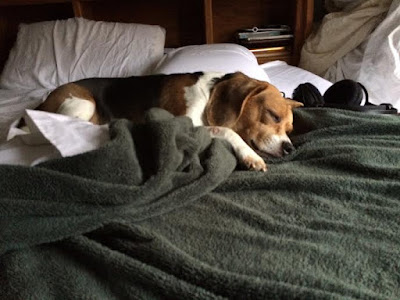 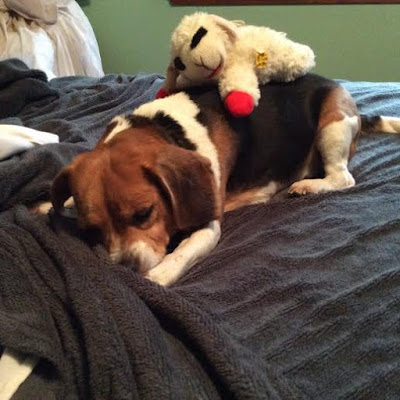 Dogs’ lives are too short. Their only fault, really.—Agnes Sligh Turnbull

There's a saying that the best day of your life is when you first say hello to your new dog, and the worst is when you have to say goodbye. For those who have grieved the loss of a loved one, pet or person, no explanation is needed. It is the hardest thing we do, as humans, I think.

There is nothing that takes grief away, except the act of grieving. Grief is a testament to how deeply we love. It brings all the things we miss about our beloveds. Eventually . . . eventually sometimes it brings a smile instead of tears. RIP Snuffy. You were cherished and loved and deserved all of it.

Posted by Hali Chambers at 11:31 PM No comments:


Quote:
"Advice is what we ask for when we already know the answer but wish we didn't."  ~Erica Jong

Posted by Hali Chambers at 10:53 PM No comments:

Jammie Chat, Day 16: You Are Not Your Addiction

Quote:
"Every addiction arises from an unconscious refusal to face and move through your own pain. Every addiction starts with pain and ends with pain. Whatever the substance you are addicted to--alcohol, food, legal or illegal drugs, or a person--you are using something or somebody to cover up your pain." ~Eckhart Tolle

I mis-remembered Cee Lo Green's quote, but you'll hear it in the Begin Again trailer:


Chic Sparrow: How I Named My Company

Quote:"Ever man has his secret sorrows which the world knows not; and often times we call a man cold when he is only sad." ~Henry Wadsworth Longfellow
Posted by Hali Chambers at 9:30 PM No comments:


I am delirious, but promised to do a daily video, so here you go!

"The secret of life, though, is to fall seven times and to get up eight times." ~Paulo Coelho, author of THE ALCHEMIST

Posted by Hali Chambers at 8:33 PM No comments:

Quotes:
"The gift that's trying to come out of you is not for you; it's for everyone." ~Kyle Cease

AquaChigger
Posted by Hali Chambers at 2:14 PM No comments:

Quote of the day:

"When the voice and the vision on the inside are more profound and more clear than all opinions on the outside, you've begun to master your life." ~Dr. John DeMartini

View of My Labyrinth From Space

See that white speck in the clearing of trees? That's my chair in the center of the labyrinth. 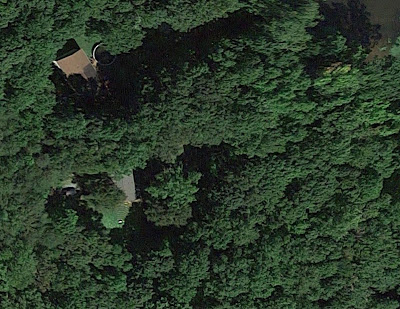 Here's a closer view where you can sorta make out the lines: 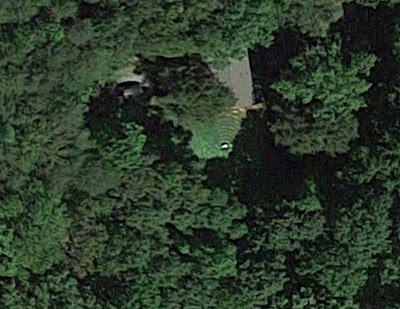 Quote of the day:
"The soul would rather fail at its own life than succeed at someone else's."  ~David White

The Top 5 Regrets of the Dying by Bronnie Ware
FYI,  "J2A" is Journey To Adulthood
Posted by Hali Chambers at 8:23 AM No comments: