Posted by Hali Chambers at 8:02 AM No comments:

Last week I was out & about the teaming metropolis of Front Royal with Mum. It was 115 degrees. Ugh. Anyway, here are a few snapshots of our day.  License plates: 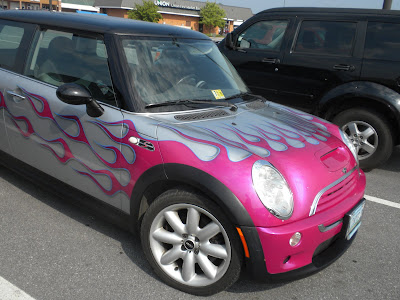 Because it was so hot, we spent a bit more time in the store wandering about. And this struck my funny bone:


For gals who don't want a punky-edge to their feminine products, they can go pop:


So after amusing myself with all of that, Mum & I went to restaurant for ice tea (me) & water-no-ice (Mum) & some GF french fries. This was the sign there:

Posted by Hali Chambers at 10:45 AM No comments:

It's been a busy week for the girls. I dropped them off at Mystic Pet when I went to Yogaville on Monday, but I got back in time to pick them up at the end of the day.

Back home, on the way up the driveway:

Lena gave me a coupla pig ears for the girls:


Tuesday we had a vet appointment with Dr. Clark. He comes out to the car and does the whole exam & everything in the parking lot so that I don't have to maneuver them in to the office. He answered all my questions and essentially the answer is: Benedryl. I noticed that Maggie is breathing heavily. At first it was just when she was going up the ramp, and then when she's walking, and then! ALL. THE. TIME. Except when she sleeps. But if she gets up in the middle of the night, she wakes me up with her breathing. Dr. Clark said as long as there's no coughing, that she's OK. He said he sees it in older, large dogs. He said that Benedryl will help her to sleep thru the night and will help with her breathing.

She also has a bit of a foot licking thing going on. He said it could be allergies or it could be behavoural. I'll think I've got it under control, and then I look over, and she's licked another spot! "If it's allergies, Benedryl will help. Some dogs go on Prozac if it's behavoural, but really, Benedryl will help with that, too." Benedryl it is! He gave me a topical anti-itch spray for her, and a new eye ointment for her eyes ( goopy in the a.m.).

Millie, on the other hand--no foot licking, or anything! They're both on the Deramaxx for arthritis and are getting around pretty well for a coupla old gals. And that was our exciting week.
Posted by Hali Chambers at 1:27 AM No comments:

Day of Rest: A Few Pix

Posted by Hali Chambers at 8:20 AM No comments: 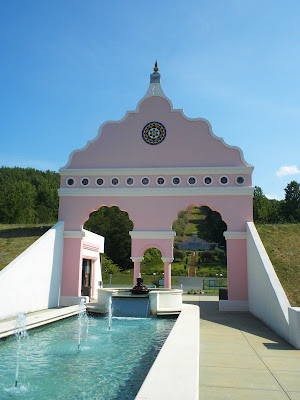 
So I'm looking FW to going back again when I can spend a bit more time exploring. I was rushing back to pick up the dogs from Mystic Pet, but next time I go, that won't be an issue. Plus it would be fun to go with chiro-sister or a friend.
Posted by Hali Chambers at 1:28 PM 4 comments: